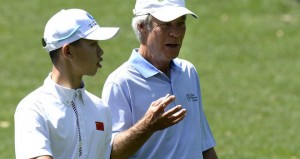 The 14-year-old, the youngest ever to play in the Masters, shot 3-over for the day and 4-over for the tournament and made the cut right on the number,

Guan played yesterday and today with Ben Crenshaw. When Guan’s putt on 18 just slid in for par, it was obvious that Crenshaw was rooting for the ball do drop. Italian Matteo Manassero was also in the group.

Manassero was the youngest to ever make the cut at one of golf’s four majors. In 2009, at the age of 16, he made it to the weekend at the Open Championship when it was held at Turnberry Resort in Scotland.

In an official statement released at about 4:15 Eastern time, Augusta said the group was put on the clock after the 10th hole. Guan was timed on hole 12 and warned after his second shot on 13.

After his second shot on 17, the penalty was assessed.

“He exceeded the 40-second rule by a considerable margin,” the statement read.

“This isn’t going to end pretty, I don’t think,” Crenshaw told the New York Times. “I’m sick. I’m sick for him. He’s 14 years old. When you get the wind blowing out here, you’re going to change your mind. It is not easy to get around this golf course the way it is set up for the two days.”

Crenshaw’s longtime caddie, Carl Jackson, who has had bags at Augusta National for more than 50 years, was asked if he believed Guan was guilty of slow play. “Yeah, but probably yesterday,” he told the Times. “The timing of it doesn’t make sense to me.”

You can read the entire interview here.

After the round, Tom Rinaldi of CBS, interviewed Guan.

Speaking in broken but understandable English, Guan said the windy conditions had him changing his clubs often throughout the day and that slowed him down.  Guan told Rinaldi he was very familiar with the rules of slow play and said that his pre-shot routine is not slow.

The Rinaldi put forth the one question that needed to be asked, did Guan think the penalty was deserved.

“I respect the decision,” Guan replied.

CBS announcer and three-time Masters champion Nick Faldo, was critical of the ruling saying that he thought every player in the 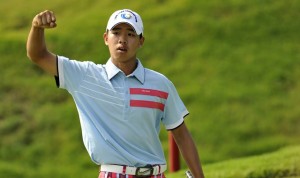 field would say the punishment should be waved.

“I cannot believe this penalty has been put on him,” Faldo said.

The last time a slow-play infraction was levied in a major came in the 2004 PGA Championship when Steve Lowery was nailed.

Paramor is the same official that put Padraig Harrington the clock during the 2009 Bridgestone Invitational. Harrington was battling Tiger Woods for the lead in the final Sunday pairing but made a triple-bogey 8 after the ruling to hand Woods the title.

At the time, Woods laid blame on Paramor and should have been fined by the PGA Tour, but was not. Lawrence Donegan took the PGA Tour to task for letting Woods off in this 2009 column you can read by clicking here.

Friday, when ESPN came on the air, it was announcers Mike Tirico and Curtis Strange that had to explain what happened with Guan. Not surprisingly, both immediately took the side of the ruling and Augusta since the decision could not have come without the blessing of Augusta officials. What Tirico and Strange needed to do was put the ruling in context, like Faldo and Jim Nantz  did somewhat 45 minutes later.