Once again, I hosted my Masters Sunday party for about the 10th time in the last 12 years. This year, because of the final round being held on Easter Sunday, the Sunday party was Saturday. 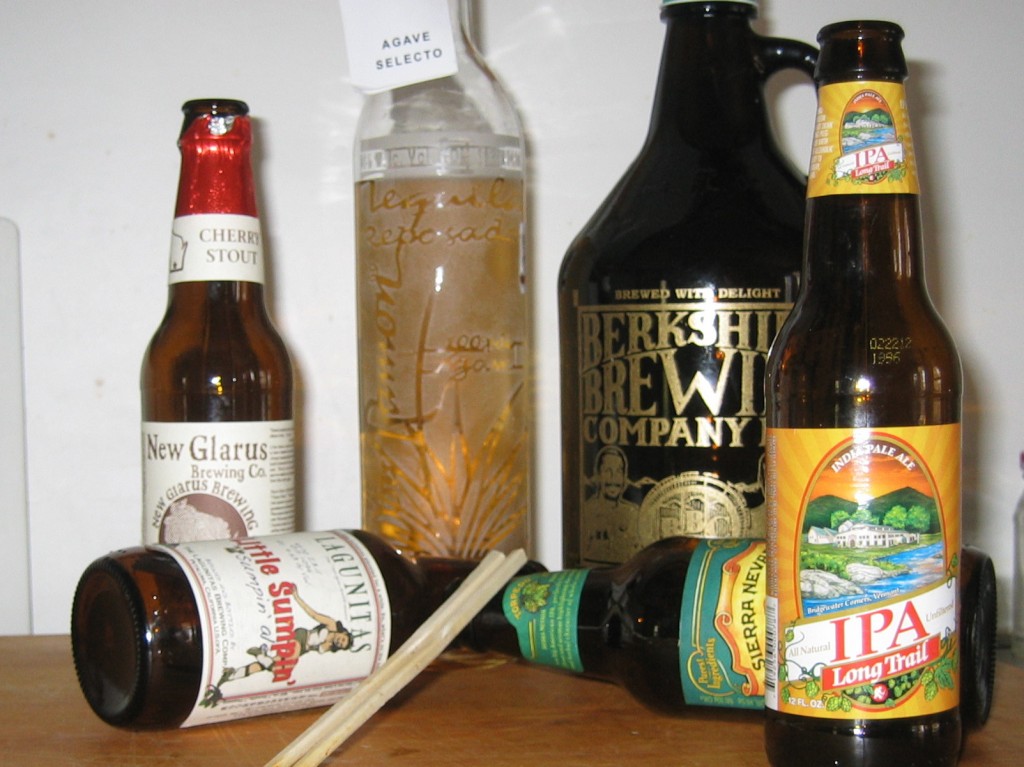 Remnants of the Masters Party

The invitation list was made up of people who will sit for over three hours with the volume of the television turned up, eat copious amounts of sushi, quaff even more fine ales and stouts, sample tequila, mock the announcers for their ridiculous attention paid to every move Eldrick Woods makes and root for Woods to fail in epic fashion.

As usual, it was diverse crowd in attendance including, a member of the Connecticut bar, a well-regarded albeit rambling photographer as well as his lovely girl friend who was here for the first time, for the second year in a row an actual Swedish knight, a state worker, the most regular attendee and, and making their debut, two very hung over math graduate students from nearby Wesleyan University. From them we learned that a sum of polynomials is a polynomial and a product of polynomials is a polynomial.

The photographer, during one of his ramblings, somehow managed to teach us a new word, proliferous, which means the same as proliferating. He also didn’t spill anything this year, so it was a big day for him.

One couple was missing because she just had a baby. None of the attendees saw that as a legitimate excuse.

This was not a good year for us or TV. Woods was out of the tournament by the end of play Friday. With Freddy Couples atop the leader board at the age of 52, television had the potential for good theater come Saturday. The fact that lead CBS announcer Jim Nantz and Couples were suite mates in college always guarantees Couples will get more air time than warranted and us a chance to laugh at Nantz and his unctuous way.

Freddy, however, chalked up a 75 on Saturday preventing Nantz from fawning and us mocking. For much of the day the scoreboard was filled with names that made most golf fans shrug. For instance, Peter Hanson, who just earned a special exemption onto the 2012 PGA Tour as a result of his great play in a few tournaments, notched a stunning 65 to lead going into Sunday and almost no one cared. Luckily, however, Phil Mickelson rode to the rescue with crowd-igniting 66 that set Sunday up to be a great day.

That’s not to say the announcers didn’t entertain us.

One of the voices in a tower told us a player was trying to hit a shot between two shoots of trees. Huh? Did he mean between a shoot of trees?

As the state worker noted, “I’ve heard of pride of lions and a murder of crows, but a shoot of trees?”

CBS did come through for us, though, with a wonderful video montage of Woods’s “highlights” from the first two rounds with a musical accompaniment that sounded like something out of the movie Chariots of Fire, no matter that Eldrick was falling apart at the seams and had no chance of winning.

Nantz was his usually sappy self on Sunday. He called Hanson’s newborn “a little baby boy” at least twice. Jim, every baby is little.

It was Peter Kostis who easily presented us with the quote of the tournament while sending the broadcast to break.

“Who’s going to take the horse by the bit and take off with this Masters?” he asked.

I think the correct answer has something to do with polynomials.

The best post-tournament comment came from one of our favorites, Kelly Tilghman. The Golf Channel host proffered that 2012 Masters champions Gerry (pronounced, Gary) “Bubba” Watson would be a great dad. He and his wife adopted a baby (not a little baby, Jim) a few weeks before the tournament. According to Tilghman, because Bubba’s father was a great dad and a military veteran, he too would be a great father. One would think that after years of telling us what a wonderful family man Woods was Tilghman would have learned her lesson when it comes to assuming she knows how golfers behave in their private lives. She, obviously, has not.