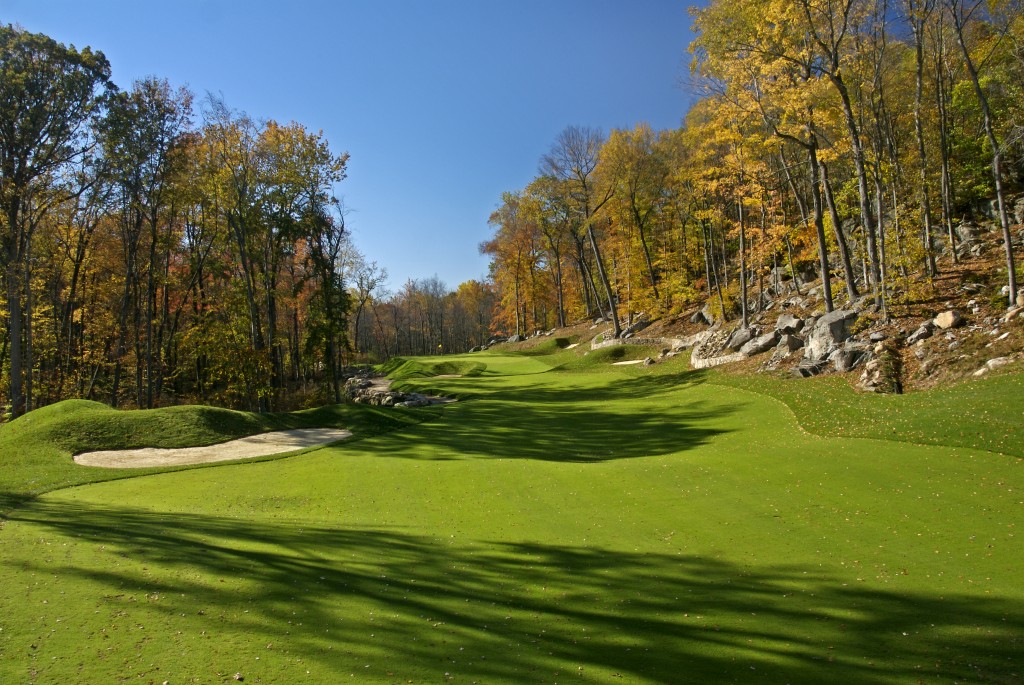 Part of a series of ad hoc recommendations for autumn golf options. Fall seems by consensus to be everyone’s favorite time to tee it up, and the feeling is especially fervent for those of us in the Northeast, where the season can never last long enough.

For most of us, the old saw about “a course you could play every day” probably doesn’t apply to Pound Ridge Golf Club. That’s not an affront, but a point seemingly affirmed by the club’s marketing strategy.

“Pebble Beach, Whistling Straits, Pinehurst #2: there are some golf courses every golfer can and should experience at least once in their lifetime,” acknowledges the club’s website.

Thus, while I have no plans to become a regular at Pound Ridge, I can say that I’ve enjoyed the course more each of the three times I’ve played it. Pete Dye’s only design in New York State, it opened in 2008 and initially seemed a bit penal for the non-scratch player.

It may still be. But the Pound Ridge team, including general manager Todd Leavenworth and construction manager / lead shaper Michael Langkau, have wisely softened the edges of the layout and thereby improved the golf experience for the average Joe.

A par 72 of 7,165 yards, slope 146, rating 76.1 from the most distant of five sets of tees, there are still ample opportunities to get in trouble. Holes 13 through 15, for example, form their own Yankee Amen Corner. The first of these is a short (486 yards from the back tees) par 5 that features “Pete’s Rock,” a giant fairway boulder that doesn’t (shouldn’t?) really come into play but still confuses the strategic sight lines.

Even after a good drive, the prudent play is to lay up: Those unable to resist the urge to get home in two face an extremely narrow target with no place, right or left, to bail.

No. 14, a par 4 measuring 429 yards from the tips, requires a hefty forced carry over wetlands, and even balls that sneak over the periphery may leave you with a blind approach.

A par 3 measuring at most 159 yards, the 15th has an elongated, 9,000-square-foot green, canted to the tee and bounded on the right by an immense outcropping. The apprehension of a miss – and its dire consequences – is worse than the shot actually required.

And that’s probably the point: Pound Ridge seems less daunting the more you play it – true of all courses, naturally, but a trademark of Dye’s work.

However well or badly you get around the course, though, Pound Ridge and the surrounding town of the same name are a charming and sedate enclave, particularly at this time of year, just 40 miles north of New York City. The area, proximate to Greenwich, Connecticut, is also packed with old-money private clubs and several good public tracks.

Pound Ridge Golf Club is currently teaming with Delamar Greenwich Harbor, a nearby hotel, on an upscale stay-and-play that would make for a lovely weekend.