Because Ireland’s got the Irish 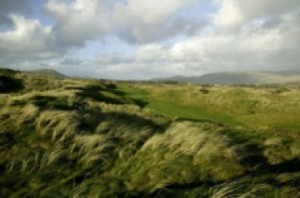 Scotland or Ireland? Which is the better golf destination? That’s a bit like being asked to choose your favourite son. Both offer superlative golf and so much more.   I was recently asked to put my two pence into a debate, me taking the side of Ireland. And now that Rory McIlroy has captured the U.S. Open and Darren Clarke walked away with the Claret Cup at The (British) Open, it seems a good time to share my thoughts and raise a toast to the Emerald Isle.  Mind you, all this is done with a grain of salt (or should I said dram of single malt?) I’d merrily toss my rain gear and clubs onto a plane for either destination in a moment’s notice. The main difference is the craic (Irish jargon for good times) on the 19th hole and the unparalleled Irish hospitality. Sure and begorrah, you’ll have more fun in Ireland. Not that the Irish don’t take their game seriously; they just have more of a lark doing it than the dour Scots. Whether teeing off at one of the greatest links courses in the world or at some unknown gem, you’ll be welcomed and teased like an old friend. Nothing takes the kinks out of a backswing like being relaxed. Let’s start with the lure of the links—the main reason we golf addicts cross the Atlantic. There are about 160 genuine links courses in the world and almost one third of them are on the Emerald Isle. How’s that for the luck of the Irish? An ode to Irish golf wouldn’t be complete without a nod to the wild west coast where Lahinch, Ballybunion and Tralee will knock your socks off. Lahinch is an eccentric hoot with enticing blind holes, the narrowest fairway in Europe and resident goats that predict the weather (not that it ever rains in Ireland; it’s just an Irish mist). At Ballybunion you might be spooked by the strange Vision of Killsaheen—a blurry mirage of a woman on a bridge stretching across the sea. Tralee’s back nine will definitely scare the bejesus out of you. Every green is protected by a yawning chasm and located on the side of a cliff. All this local colour makes for great craic over a Guinness or two. Nearby, Doonbeg, the newest kid on the block, is Greg Norman’s masterpiece featuring an ebb and flow of memorable holes, most with ocean views. With luck you’ll encounter the “mayor” of Doonbeg in the snug Darby’s pub after your round. Buy him a Guinness and he’ll write you a poem. This is, after all, the land of the Limerick. 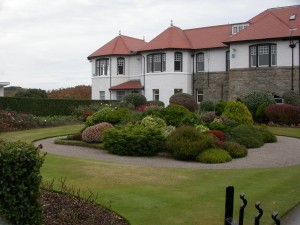 Northern Ireland has been described as a 1000-hole golf course scattered with towns and villages. Royal County Down “where the Mountains of Morne sweep down to the sea” and Royal Portrush’s Dunluce course on the spectacular Causeway Coast are ranked among the world’s top 25 courses. Both welcome visitors; all you need is a handicap certificate. To get on the Old Course at St. Andrews you need to win a lottery, literally! Or book far in advance and pay the piper for the privilege.   While you’re on the Causeway Coast, stop in to Bushmills, the world’s oldest licensed distillery, where they’ve been producing the “water of life” since 1608. Take a tour and sip Ireland’s spirited answer to single malts. I’m not the only swinger to be smitten by the Emerald Isle. Ireland’s North West region is the 2011 recipient of the “European Golf Destination of the Year” by the International Association of Golf Tour Operators (IAGTO). The awards are voted for by more than 360 tour operators and golf travel media from 51 countries. Votes are based on what the golf operators consider to be the best performing golf resorts and destinations and consider criteria such as customer satisfaction, quality of courses and accommodation, support from the local tourism industry, accessibility of tee times and value.  By the way, the average green fee here is 55€. Just to twist the dirk a wee bit deeper, finalists included Fife in Scotland (home to the Old Course at St. Andrews). 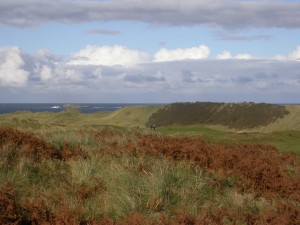 Give me a bit more ink and I’ll tempt you with tales of Old Head a cliff-hanging drama queen near Kinsale. Or the impeccable parkland course at Dromoland Castle where you’d swear that leprechauns manicured the fairways overnight and the breakfast menu includes hair-of-the-dog hangover cures. (I can vouch for the Bloody Mary.) So pack your clubs and head to the land of 40 shades of green and a zillion welcomes. I’m sorry Scotland, but you simply don’t have what it takes—you’re not Irish. P.S. Dear Scotland: I’d be happy to come on over, play more of your stellar links and sing a different tune!