The story goes that after God created the world an angel confronted Him: “I thought all countries were supposed to be created equal?” she questioned. “Yet you’ve given Wales the most wonders: grand mountains, rivers teeming with fish, the most beautiful women, the most virile men, miles of spectacular coastline, some of the world’s best golf links, more castles per square mile than anywhere else in Europe.”

“All that’s true,” replied the Almighty. “But I put it beside England.”

It’s an old joke related over a pint of Brains beer by Roger Pride, marketing director for the Wales Tourism Board, but one that captures the Welsh spirit. After centuries of playing second fiddle to their English neighbours, the feisty, prideful Welsh are hell bent on promoting their own culture. The flag, flaunting its flamboyant red dragon, flies all over the land. And that vowel-challenged language—so melodious when sung by a boys’ choir or set to poetry—is now being taught in all of the schools.

Not so long ago Welsh fairways also played second fiddle to their U.K. neighbours. However, when the International Association of Golf Tour Operators awarded Wales the “Undiscovered Golf Destination of the Year” in 2003, that kudo, plus the upcoming Ryder Cup at Celtic Manor in October, put the country on the global golf map.

But despite its newfound limelight, the game here remains “golf as it should be.” It’s manifested in a warm welcome, green fees at a fraction of what you’d pay elsewhere in the U.K. and some of the finest links on the planet.

Last summer, my friend Shirley and I decided to celebrate our birthdays with a swing around Wales. The ground rules were simple: no keeping score, no searching longer than ten seconds for errant balls and if you don’t like your lie, give it a foot wedge. Stress-free golf was our game plan.

From Heathrow airport, we headed the rental car west on the M4. We knew we’d arrived in Wales when the road signs became bilingual and the lengthy Welsh words indecipherable. After a couple of hours we checked into The St. David’s Hotel and Spa in Cardiff Bay where the new Millennium Centre and a host of trendy eateries has transformed what was once the world’s largest coal-exporting port. The hotel’s Marine Spa proved to be the ideal antidote for jetlag. At Tides restaurant we enjoyed the first of many outstanding meals. Back in the 1950s, British food critic Egon Ronay pronounced the food in Wales to be dismal. He’d eat those words today, especially if he tucked into Tides’ herb-roasted rack of lamb and passion fruit crème brûlée. 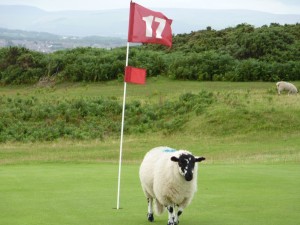 A resident at Southerndown ©Anita Draycott

The next morning we tackled our first links course, wild and windswept Southerndown, designed by Willie Fernie in 1905.

“Bracken to the left, bracken to the right, and a fairway rising up to the sky. The first at Southerndown is one of the most difficult opening holes in golf,” remarked champion golfer Sir Henry Cotton. Located 200 feet above the sea, the pervasive wind accentuates the challenge. But what gives Southerndown its unique character is the fact that it’s covered with bleating sheep, a reminder that the course is laid out on common land, so local farmers have the right to graze their flocks here.

One of those sheep made the news in 1995 when member Peter Croke, embroiled in match-play, implanted his drive into a sheep’s bottom on the 17th. The startled animal bolted up the fairway, depositing the ball thirty yards nearer the hole. Croke won the hole by a stroke.

We embarked on a full day’s drive though the bucolic centre of Wales and north to Anglesey the following day. Now a word about driving in Wales: we rented a mid-size car thinking we’d want the extra space for golf clubs, but when we found ourselves on roads not much wider than sheep paths we realized we would have had less of a toe-clenching ride in a smaller vehicle.

Several sheep and caressed curbs later, we crossed the bridge at Bangor and popped into a pub in the village of Llanfairpwllgwyngllgogerychwyrndrobwllllantysiliogogogoch—the longest word in the Welsh language. Eventually we arrived at Neuadd Lwyd where hosts Peter and Susannah Woods have lovingly restored a Victorian rectory into what The Sunday Times’ The Good Hotel Guide named “Welsh Country House of the Year, 2010.”

Susannah is a passionate chef whose motto might be “everything made from scratch.” Indeed, she bakes her own bread, raises her own chickens and grows her own veggies. We feasted on crab cocktails, Welsh Black beef served with braised leeks and new potatoes. Pudding, as the Welsh call dessert, was a decadent chocolate soufflé.

Neuadd Lwyd is a member of Welsh Rarebits, a collection of 54 properties personally selected by the gregarious founder, Emyr Griffith. This was my forth trip to Wales and, as usual, the Rarebits we visited offered a sublime level of hospitality and cuisine.

The original Welsh Rarebit, basically cheese melted on toast, is found on menus all over Wales and might be considered the national dish. For breakfast the following morning, Susannah offered to make her version, a tangy combo of grated cheddar, ale, dry mustard, Worchester sauce, sage and beaten eggs served bubbling hot over toast.

It proved to be the ideal rib-sticker for our round at Holyhead Golf Club, designed by James Braid in 1912. Number two is a feisty uphill 220-yard par-three requiring that you nail your ball to a postage-stamp green surrounded by gorse. After it, number three feels like you’re tackling Mt. Everest. More reasons not to keep score!

Nefyn & District Golf Club was next on our hit list. Dubbed the Pebble Beach of Wales, Nefyn is a twenty-six-hole track with ten outward fairways and two separate inward eights called the Old and the New. For sheer cliff-hanging drama, I recommend the Old eight, which clings to the top of a narrow peninsula. One golf writer remarked that it was “like playing on the deck of an aircraft carrier.” 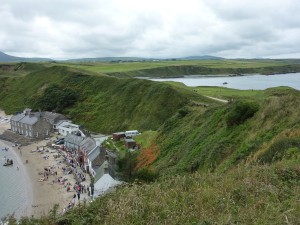 Perhaps no other hole in the world confronts the golfer with the distractions of number twelve with its blind drive, blind second shot, public thoroughfare populated by hikers and a crater-sized pit. After draining your putt on number fifteen, follow a footpath down to the Ty Coch Inn, located on the beach at Porthdinllaen, for a quick pint. It’s a Nefyn tradition.

We next navigated our way down the west coast to the quintessential seaside resort towns of Saundersfoot and neighbouring Tenby. The oldest golf club in Wales and another venerable James Braid design dating back to 1888, Tenby, like many of the vintage courses here, is dissected by a railroad track. Back in the nineteenth century this was the preferred form of transportation for holidaymakers and golfers alike. The par-68, 6,026-yard course isn’t terribly long but its rollercoaster terrain, severe rough, lovely views of the pastel-painted buildings and black church spire of the walled town, plus the fact that you can practically hand the train conductor a cup of tea on the seventh tee, make Tenby a course of great character.

Later, we checked into the St. Bride Spa Hotel in Saundersfoot. From both The Cliff restaurant and the infinity pool at the hotel’s Marine Spa you’ll have million-dollar views of Carmarthen Bay. 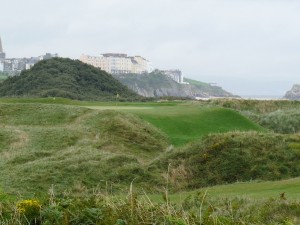 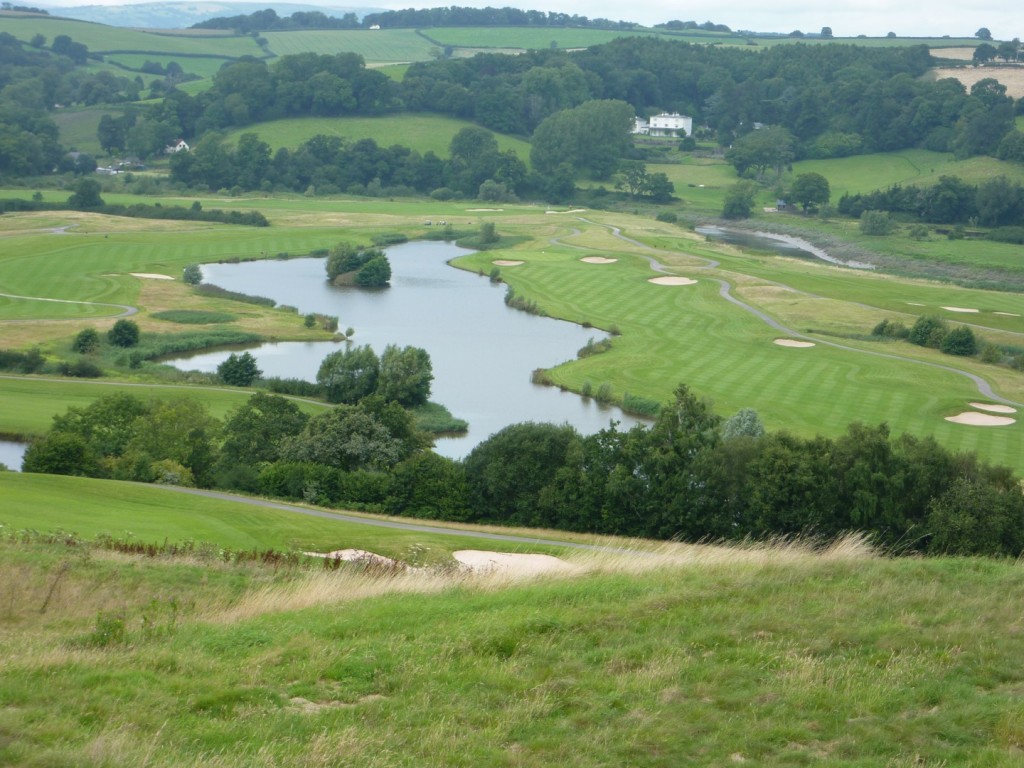 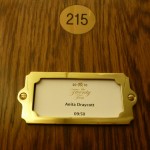 My locker for a day at Celtic Manor ©Anita Draycott

We saved Wales’ newest course at Celtic Manor for our grand finale. Back in the first century AD, the Romans built an amphitheatre at Isca as their fortress in west Britain. It was a place for sport and gladiatorial combat. Two thousand years later, a new amphitheatre, the Twenty Ten course at Celtic Manor in South Wales’s Usk Valley, will become the venue for the upcoming Ryder Cup spectacle.

From October 1 to 3, 2010, golf fanatics will be riveted to the match-play drama between the American and European teams on the first course ever purpose-built for a Ryder Cup.

Huge viewing banks in the steep hillside towering above the closing three holes can accommodate legions of fans.

Indeed, there will be plenty of drama on the 18th, a 575-yard par-five. A good drive allows the possibility of reaching the green in two, provided that a long approach shot across water reaches an elevated green defended by a pair of sizable bunkers eager to snare anything too ambitious. American captain Corey Pavin concurs that “the heat will be on from fourteen through eighteen.”

Bring on the gladiators!

The Twenty Ten Course is open to the public until the end of August 2010. For tickets and packages to the Ryder Cup, Premier Golf is the official North American operator.