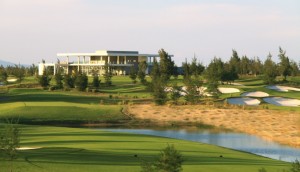 Vietnam isn’t on most North American golfers’ radar, but it should be. Launched in 2006, the Ho Chi Minh Golf Trail is a collection of championship courses that run parallel to the Ho Chi Minh Trail, an elusive skein of jungle tracks running from north to south that were used as supply routes for the Vietnamese in their war against American troops.

As a further enticement, the International Association of Golf Travel Operators named Vietnam its 2007 “Undiscovered Golf Destination of the Year.”

You might speculate that putting the late Ho Chi Minh’s name on a golf trail seems oxymoronic, but perhaps he’d be pleased. Ho became a communist but he was first and foremost a nationalist who is greatly revered by the Vietnamese. Hopefully, the national hero would approve of the growth of golf in this previously war-torn country. With strong support from the United States, Vietnam joined the World Trade Organization in 2007 and is experiencing an economic and tourism boom.

When you aren’t chasing dimpled white balls, you’ll discover a dynamic country. Temples, spas, markets and Vietnamese cuisine are all part of the bargain. Yes bargain. Your dollar stretches a long way here.

Chilling Out in Dalat

Dalat is dramatically different from the rest of Vietnam: it’s highland cool instead of tropical hot; the town is dotted with French colonial villas instead of squat socialist architecture; farmers grow strawberries, artichokes and coffee instead of rice. They even produce decent wine.

Dalat is also the honeymoon capital of Vietnam. Lovers pose for photographs at the waterfalls, in lush rose gardens and around the town’s centrepiece, Xuan Huong Lake, complete with swan pedal boats. 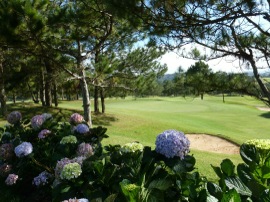 Situated a mile above sea level in the Central Highlands, The Dalat Palace Golf Club is Vietnam’s oldest. Originally laid out in 1922 by French architect Ernest Hebrard, the course and eponymous hotel were stomping grounds for Vietnam’s first golfer and last emperor, Bao Dai.

The course is a roller coaster of inventive, demanding fairways that twist and undulate through a landscape of lakes, pine forests, bougainvillea and hydrangeas.

Female caddies are an integral and enjoyable part of the Asian golf experience. Each course has its own team of enthusiastic tiny gals dressed in club tracksuits and conical straw hats who will teach you a few words in Vietnamese and hopefully help you sink some putts.

On a hill overlooking the lake, the Dalat Palace reigns supreme. The Art Deco façade, complete with vintage Rolls Royce, houses an opulent interior reminiscent of a grand French château.

The Dalat’s Rabelais dining room serves exquisite French cuisine in a setting that would rival Versailles.

Architect Dang Viet’s kitschy and surreal Hang Nga “Crazy House” is Vietnam’s answer to Barcelona’s Gaudi with whimsical nods to Walt Disney and The Brothers Grimm. It’s actually a guesthouse but most folks just come for a peek and a photo op.

For centuries, Hoi An served as an ancient port for Japanese, Chinese, Portuguese and French seafarers. Miraculously, its historic buildings were unscathed by the Vietnam War. Today, the downtown, designated as UNESCO World Heritage Site, is a marvelous hodgepodge of temples, bridges, pagodas and shop houses, most festooned with silk lanterns.

Just outside of town, past rice paddies and water buffaloes, stretches the former R&R hangout of American troops known as China Beach. Today they call it Ha My Beach and it’s home to luxury resorts and designer fairways.

Montgomerie Links, designed by the 2010 European Ryder Cup Captain, Colin Montgomerie, sets a Scottish-style tract into a Vietnamese landscape with views of Marble Mountain on the back nine. A concrete bunker behind the 6th tees is a haunting war reminder. For the “Full Monty,” hone your game here at Vietnam’s best golf academy.

For a splurge, check into a beachside villa at the stunning Nam Hai resort across from the golf courses. The Life Heritage Resort, conveniently located on the Thu Bon River in the old town, is also lovely.

Hoi An boasts more than 400 shops offering visitors the chance to have something tailor-made in hours for a pittance—for example a silk blazer delivered via bicycle to your hotel in five hours for about $35. The Life Heritage Spa’s Thai massage, about $20, eliminates your golf kinks.

Dotted with lakes and lovely French colonial architecture, Hanoi is a beguiling capital. However, the traffic is mind-boggling. The streets teem with thousands of scooters weaving and honking. If a kind elderly lady hadn’t taken my arm and led me across the street, I might still be there marveling how a family of four can fit on a moped.

You’ll find respite from the madding crowd at the landmark Sofitel Legend Metropole Hanoi Hotel, named “one of Asia’s top three city hotels” by Travel + Leisure magazine’s 2011 listing of the top 100 hotels in the world. A swimming pool and spa form an inner courtyard linking the contemporary and historic wings where the likes of Angelina Jolie and Charlie Chaplin have stayed.

At the Metropole’s Le Beaulieu dine Parisian-style on oysters, foie gras and rack of lamb. Later, at Le Club, beside the pool, a chanteuse croons jazz nightly.

About an hour from Hanoi, King’s Island Golf Course boasts two championship tracts, Lakeside and Mountainview, accessed via a boat shuttle from the mainland. Lakeside, an aptly named gem with water in play on 14 holes, is a tranquil contrast to hectic Hanoi.

Legend has it that the thousands of towering limestone/karst rock formations in Halong Bay were created by thrashing dragons sent from heaven to protect Vietnam from invaders. Today’s “invaders” are welcome to this (provisionally acclaimed) “New 7 Wonders of Nature” which is also a UNESCO World Heritage Site. 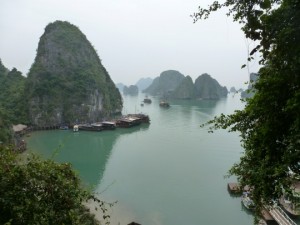 The ultimate way to experience Vietnam’s top tourist attraction is on a romantic overnight cruise aboard the replica steamer, Emeraude. Try a Reflexology foot massage as you sail past sampans and floating villages.

From fishing village to British Colony, Hong Kong became a Special Administrative Region of the People’s Republic of China with the handover in 1997. Fret not. It’s lost none of its cosmopolitan glamour and glitter. Think Manhattan on steroids!

The W Hong Kong lives up to its motto, “Whatever… Whenever,” with attentive service in a hip environment overlooking Kowloon.

The Mandarin Oriental is Hong Kong’s only hotel with three Michelin-starred restaurants—the Man Wah, Pierre and Mandarin Grill + Bar. But there’s also The Krug Room where chef orchestrates tantalizing menus to be paired with the largest collection of Krug champagne outside of France.