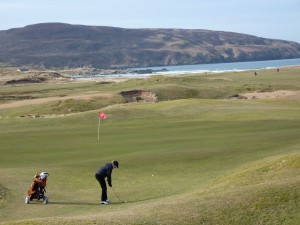 It was over a few amber elixirs with my friend Margaret that the idea for our Highland fling was hatched. Margaret, an expert on all things distilled and fermented was keen to venture into the Hebridean Highlands and beyond to sample some of Scotland’s smokiest single malts. Machrihanish Dunes, the first Scottish links course to open in Scotland in 100 years, along with a few other little-known gems, were on my hit list. Margaret and I are kindred spirits who enjoy nothing more than hitting the links by day and enjoying a wee dram in a snug pub or baronial castle by night.

So we thirsty golfers began our romp last spring, driving north from Glasgow to Cameron House on the bonnie banks of fabled Loch Lomond. From the kilted bellman at the front door to the baronial reception hall, tartan rules at this five-star country estate.

You can take a shuttle over to the resort’s The Carrick golf course but it’s far more fun to go via the Celtic Warrior yacht. The 7,082-yard heathland course, opened in 2007, was designed by Toronto-based golf course architect Doug Carrick. The modest Carrick is quick to point out that carrick is Gaelic for rock. You’ll literally be taking the low road and then the high road as the ninth hole traverses the fault line that divides the highlands from the lowlands.

The signature 14th par-three, called “Tappit Doon,” requires launching your drive from an elevated tee to a green well protected by five deep bunkers. If you don’t par it, take solace in the views of Ben Lomond, the loch’s highest peak.

The clubhouse boasts a fully-stocked pro shop, the Claret Jug restaurant and the Carrick Spa, winner of “Best Spa in Scotland” for the past two years, offering a variety of treatments designed for golfers, including a Back Nine massage and Soothing Recovery facial to calm those ruddy cheeks. On the rooftop you can bubble away in the hot tub overlooking the 18th green.

Early the next morning we ferried from Kennacraig on Loch Fyne to the Hebridean island of Islay (pronounced eye-la), home to some of the peatiest single malts on the planet. Approaching Port Ellen, the smoke belching from the chimneys of three of Islay’s iconic distilleries (Laphroaig, Lagavulin and Ardbeg) stung my nostrils. Set on the jagged coast punctuated with rock outcroppings, the distilleries all adhere to the same style—whitewashed outer walls with their names painted in huge black letters on the seaward side.

Now, a wee primer on Islay’s whiskies… Irish monks originally brought the art of distilling the uisge beatha (water of life) to Islay in the 14th century. It was an ideal location due to its unlimited supply of peat and soft pure water. Originally, the islanders made their brew in illegal stills and even though an Excise tax was declared in 1644, excise men didn’t venture onto Islay until 1797 because they regarded the natives as wild barbarians. Though only 600 kilometers square, Islay now boasts eight legal distilleries with names best pronounced with a rich Scottish brogue: Laphroaig, Lagavulin, Ardbeg, Bowmore, Kilchoman, Caol Ila, Bunnahabhain and Bruicladdich.

The three ingredients for making whisky are barley, water and yeast. But the alchemy depends on where that water comes from, how long the barley is malted and smoked over peat fires, the shape of the stills and the skill of the master blender. All these factors and more give each distillery’s whiskies their distinctive taste and style.

There’s no right or wrong way to drink single malts. Some are best enjoyed straight while others benefit from a few drops of water causing an exothermic reaction that heats up the whisky. The liquid smoke or “reek of peat” found in Islay whiskies depends on their phenol levels, which generally range from two (Bunnahabhain) to 50 (Ardbeg).

Each of the distilleries has its own claim to fame. Laphroaig, established in 1815, is the preferred tipple of Sean Connery and Prince Charles who bestowed upon it a Royal Warrant in 1994. Ardbeg generally brews the peatiest single malts. But not to be outdone, Bruichladdich has produced Octomore, the peatiest in the world with 140 parts phenol. I almost gagged on the iodiny briny flavour. Margaret suggested it might be the ideal dram to offer a guest who has long outstayed his/her welcome. 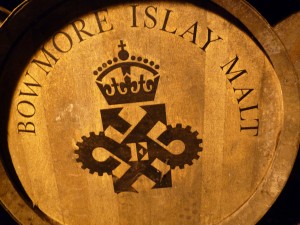 Every distillery offers a variety of tours depending on your enthusiasm. I recommend Bowmore’s Craftsman’s Tour lasting about three hours. Visitors see and sample the entire process from tasting the water fresh from the River Laggan to shoveling the germinating peat on the malting floor to getting grain in their shoes in the room where the peat is smoked.  We also pulled on rubber boots and drove to Bowmore’s bogs with a couple of characters named Scott Shaw and Ginger Willie who gave us a peat cutting lesson—not an easy task. In fact, it can be perilous. Ginger told us that one keen visitor sank up to his neck into the bog. His wellies are still buried.

Back at Bowmore, head distiller David Turner gave us a taste of the clear alcohol, called new make, before it matures in bourbon or sherry casks in the warehouse dating back to 1779. It was cold and damp and that’s exactly what whisky loves during the aging process.  We warmed up at the tasting bar.

“If you can’t find a Bowmore to fall in love with, you may have to consider very seriously the possibility that you’re wasting your money drinking whisky at all,” remarked Iain Banks in his book Raw Spirit: In Search of the Perfect Dram. I was quite smitten by Bowmore’s 25 year-old elixir with notes of toffee, sherry and hazelnuts. It slides down nicely with a buttery shortbread. 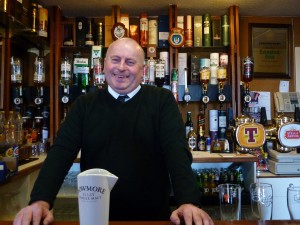 Created in 1891 by Willie Campbell, Macrie is the only golf course on Islay and I guarantee you’ll never forget it. You’ll want to play with a local or at least purchase a yardage book to find your way up and over the mighty dunes. Number seven gets my vote for “Blind Hole of the World.” The tee is tucked into a low spot such that nary a fairway can be seen. Then there’s a forced carry over a towering shaggy dune. The green too is out of sight. For a true bygone golf experience, the club will rent you a set of hickory clubs. Blind faith and perhaps a wee dram in your hip flask are recommended.

We took a ferry from Port Askaig on the east side of Islay to Kennacraig and followed the long and winding road to Machrihanish. This remote southern end of the Kintyre peninsula inspired Sir Paul McCartney, who has a farm in the area, to recorded his 1977 hit “Mull of Kintyre.” Locals will also tell you that McCartney’s ballad, “The Long and Winding Road,” is about the B842 running along the east coast to Campbeltown.

The opening hole at Machrihanish, arguably the best in the world, requires a drive fired diagonally across the Atlantic Ocean to an undulating fairway skirting the beach. How much of the bay to bite off depends on your courage and the wind.

When Old Tom Morris was hired to create the 18-hole course in 1879 he remarked that the links “had been specially designed by The Almighty for playing golf.” 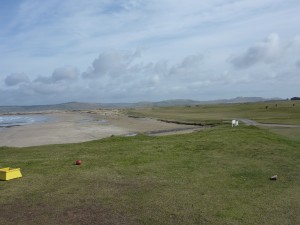 True links aficionados put the venerable Machrihanish course on their list of places to play before they die and now there’s another reason to take that long, winding road. The new Machrihanish Dunes is the first links to open on the west coast of Scotland in 100 years.  Acclaimed architect David McLay Kidd who also designed The Castle, the latest at St. Andrews, took on the project that was not without its obstacles. Kidd and his team had to work under strict environmental rules laid down by Scottish National Heritage. This meant moving minimal dirt, digging no drainage or irrigation and buying a herd of feisty black sheep to “mow” the rough. The happy triumph, as the course slogan goes, is “the way golf began.”

Ten minutes down the road, Campbeltown, known as the whisky capital of the world with 34 distilleries in the 19th century, now has only three but Springbank is well worth a visit. It’s the only distillery in Scotland to be owned continuously by the same family since 1828 and prides itself on its traditional methods. Springbank was named whisky distillery of the year in 2010.

It seems that for both golf and whisky, the “back to the future” philosophy is the way to go.

You can play golf year round but best weather is April to October.

Cameron House won best Resort Hotel in Scotland at the 2009 Golf Tourism Scotland Golf Standard Awards. They can arrange for a seaplane to Islay.

Bowmore has converted a number of buildings into self-catering units. We stayed at the Maltman’s cottage.

At Machrihanish, stay at the Ugadale cottages.

We rented an automatic from Ronald Clark. Driving on the “wrong” side of the road is enough challenge, never mind switching gears with your left hand.

There are also daily flights from Glasgow to Islay and Macrihanish.

For all you need to know about the Queen of the Hebrides, distillery tours, taxi rentals (don’t drink and drive) and festivals, visit