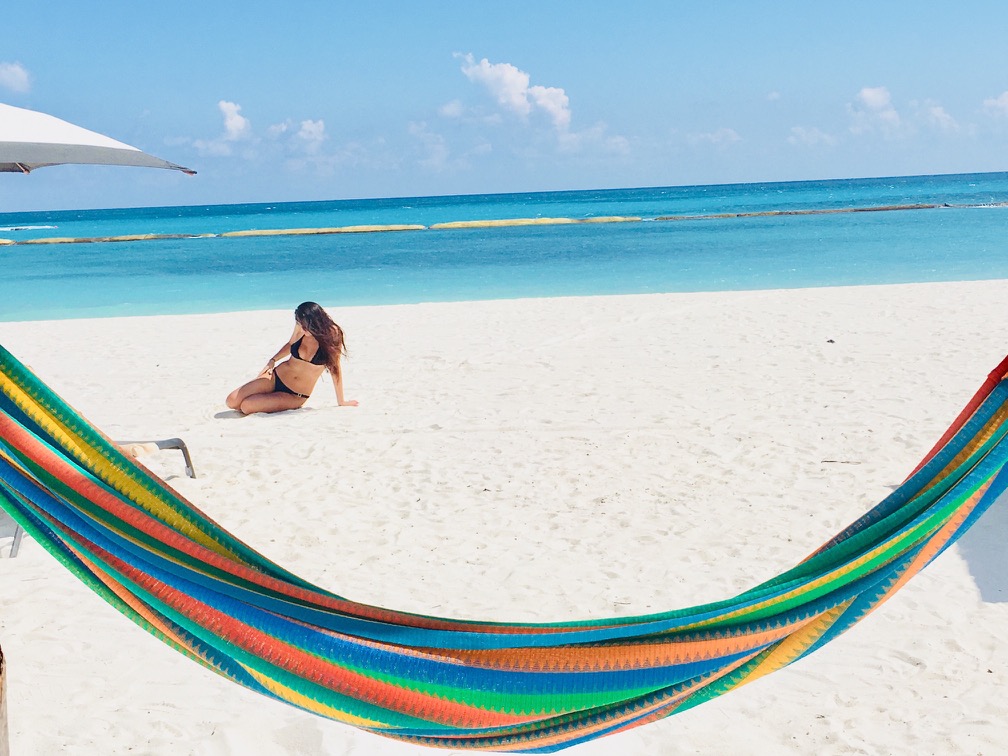 When the mighty Mayan civilization collapsed around the 15th century, the stretch of beach and jungle now known as the Mayan Riviera was virtually unknown, its only inhabitants a sprinkling of farmers and fishermen

But in 1967, Cancun became the first computer-planned resort in Mexico, selected based on the quality of its beaches, sunshine, unique historical attractions and hospitable locals. The plan worked— in spades! Today the Mayan Riviera is Mexico’s top tourist destination and a must on every avid golfer’s hit list.

I’m recently back from playing in a pro/am at the OHL Classic at Mayakoba on the El Camaleon golf course. El Camaleon, made Mexican golf history by becoming the first PGA TOUR full field event ever to be held outside of the USA or Canada in 2007. This year was the tenth anniversary of this prestigious competition.

I had the pleasure of playing with journalists Brandon Tucker, of the Golf Channel, Larry Olmstead, a bestselling author from Vermont and Manuel Elvira, a radio and TV announcer from Madrid. Our pro was Jim Herman. This year’s pro roster included Rickie Fowler, Zach Johnson and Graeme McDowell. Winner of the 2017 was Patton Kizzire. Sorry to say our team did not win the pro/am, but we certainly had fun.

Your golf-addicted clients who watched the event on TV will no doubt want to pack their clubs and head south of the border once see this gorgeous course, the first in Mexico to be designed by Greg Norman. 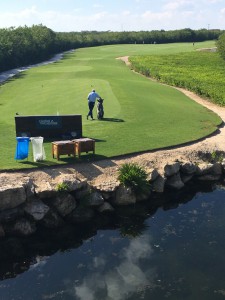 Like its namesake, (the chameleon lizard), the 18-hole El Camaleon changes and blends with an environment that winds under a mangrove canopy, along banks of turquoise lagoons, past natural ceynotes (the naturally occurring freshwater caves or sinkholes unique to the Yucatan Peninsula) to within a pitching wedge of the rolling surf.

Adding the OHL Mayakoba Golf Classic to the PGA Tour has put the Mayan Riviera on the world golf map. Stretching from just north of Cancun south to Playacar, there are now more than a dozen courses open for play.

From its inception, the OHL Classic at Mayakoba has donated more than two million U.S. dollars to charities and philanthropic causes. They have also created the “golf par a todos” (golf for everyone) program to promote participation in the game for folks of all ages and income levels. “Golf par a todos” holds the Guinness Record for the World Largest Golf Lesson of 1,073 participants. Who knows? Maybe one of those young swingers will become the next Lorena Ochoa?

OHL develops projects in the high-end tourist and hotel sector. The Fairmont Mayakoba, opened in 2006, was the first in a series of planned developments billed as “a new civilization on Mexico’s Riviera Maya.” Now the community offers Rosewood, Banyan Tree and the latest kid on the Mayakoba block, Andaz Mayakoba Resort Riviera Maya where I stayed for four fantastic days whilst the first snow hit the Toronto area.

When guests enter the open-air lobby, Andaz offers a memorable welcome. The circular space has a round skylight hole cut out of the ceiling; below it is a shallow pool. The design is meant to resemble a cenote. Guests are welcomed with a hibiscus/tequila cocktail and offered a bowl from which to choose a crystal. The idea is to make a wish and toss your crystal into the “cenote.” The Mayans revered cenotes, believing they were sacred portals to the gods. 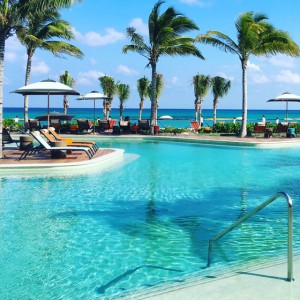 Alejandra Robelo, Marketing and Communications Manager for the property, told me that Andaz, means “personal style” in Hindi. Indeed, the resort has a distinct personality, quite different from the other hotels in Mayakoba. The vibe is casual, contemporary, chic and easy with lots of Mexican design flourishes. The staff is about as friendly and eager to please as I have encountered anywhere. After one day, many called me by name and offered to help me with my ongoing Spanish lessons. In fact, if Carlito had asked me one more time if my shrimp taco was good and if he could bring me anything else, maybe a spicier salsa, I might have just asked him to sit down and join me.

Kudos to executive chef, Vincent Wallez and his culinary team. Andaz offers four unique dining venues. Casa Amate, open only for dinner, has the ambience of a private home—perhaps the sort of pad where el presidente of OHL might reside. You can dine on delicious Latin American cuisine in the library, dining or living rooms or studio lounge. Afterwards, enjoy a nightcap and a hand-rolled cigar on the patio.

C0cina Milagro offers an international menu. I enjoyed a perfectly grilled red snapper with anchiote seeds. Everyday they bake three kinds of bread. One bite of the onion rolls and out the window flew my willpower.

OllaTaco and OllaCeviche, down by the beach, will satisfy your taco or ceviche cravings.

The resort also offers a series of activities and events, allowing guests to get in touch with Mayan culture, such as learning to speak the

language or preparing tacos in a “tacology” class. There are also a full slate of programs, such as kite surfing, beach yoga, craft beer and tequila tastings and eco-cruises around the lagoon. 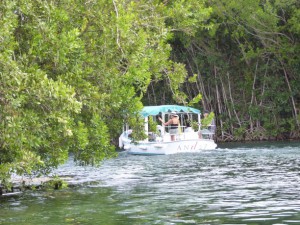 Mayakoba (the pseudo Mayan word meaning city of water) has garnered numerous awards for both its quality of service and its commitment to preserving the ecology. It took OHL six years to research the Mayakoba project with a team of archeologists, biologists, ornithologists, engineers and architects. Waterways were mapped, then the developers blasted and dug ten kilometres of limestone canals, creating a sort of Venice of the Caribbean with many of the accommodations perched on the edges of the blue lagoons. Thousands of native trees and flowers were transplanted and grafted using both traditional Mayan and cutting-edge techniques. A series of brackish lagoons leading to a sugary white beach and the Caribbean Sea.

Lanchas (electric boats), golf carts or bicycles transport guests around the property. Cruising past jungles and mangroves that provide a peaceful habitat for countless birds, fish, crocodiles and spider monkeys is the nicest way I know travel to breakfast.

I have to commend the visionaries at OHL for taking the time to do things, in their words, “divine and right” at Mayakoba. There is an unwritten contract here between man and wildlife. Neither disturbs the other.

If that crystal I tossed into the Andaz lobby cenote grants me my wish, I’ll be back and to enjoy more birdies, both in the lagoons and on the fairways.