While Phil Mickelson, Keegan Bradley and ultimately Bill Haas were putting on a show down the stretch at last weekend’s PGA Tour’s Northern Trust Open at Riviera Country Club, Sergio Garcia fashioned a round that will probably be one of the best of the year when all is said and done. 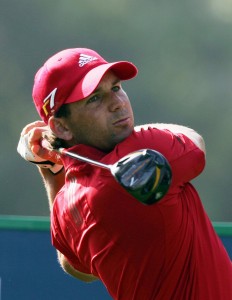 When viewed in comparison to what the rest of the field did on Sunday, Garcia’s number was nothing short of spectacular.

Starting the day in 49th place after rounds of 69-76-70=215 (2-over-par), Garcia notched a 7-under best-of-the-week 64, three shots better than Fredrik Jacobsen who alone shot a 4-under 67. There was only one -3 and that came from Michael Thompson who finished tied for 17th. There were two 65 during the tournament, both in the second round.

Tournament winner Haas was -2 for the day while his playoff adversaries, Mickelson and Keegan, were even. Remarkably, 50 players scored above par over the final 18 holes. Sunghoon Kang and Stewart Cink were 9-over, Rickie Fowler and Joe Ogilvie were plus-8 while Ernie Els, Spencer Levin and Luke Donald were part of the group that was 7-over. None of the bottom 25 players in the final result finished even or under par. The best of the bunch was Harrison Frazier’s and Ken Duke’s plus-2.

For the week Garcia was tied for second in greens in regulation with 66.7 percent tied for 9th with 15 birdies and tied for first with two eagles. He finished tied for 41st with an average of 1.750 putts per round but over the final 18 that average was 1.417. His weeks average for strokes gained – putting was .767 but on Sunday that number was 2.966.

With his ability to make birdies and eagles, Garcia would be a good pick for this weeks Accenture Match Play Championship which makes my choice of Justin Rose for the golf pool I’m in confounding.