Click here for the story from the Worcester Telegram and Gazette detailing how Patricia A. Maione, ended up in a bunker on Whitinsville (Mass) Golf Club. 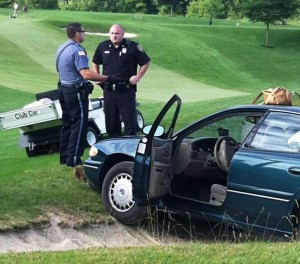 According to the story, Northbridge Police Officer Randy Lloyd wrote in his report at the arraignment in Uxbridge District Court yesterday that Patricia A. Malone, ‘stated that her GPS had told her to turn left. She stated that this left brought her into a ‘cornfield’ and once she was in the ‘cornfield’ she kept driving trying to get out of her ‘cornfield.’ ”

He added, “Ms. Maione stated that she did not even like golf.”