The home of the PGA Tour’s Travelers Championship will undergo a long-needed bunker renovation beginning in the fall according to Tour officials.

TPC River Highlands in Cromwell, Conn. has not had its sand hazards redone since 1995, according to longtime golf course superintendent Tom DeGrandi, although his staff has been redoing one to two bunkers a year in recent times. 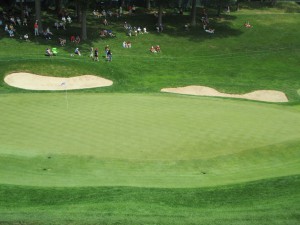 On courses that experience winter heaving and/or heavy play, bunkers usually need to be rebuilt every 12 to 15 years.

“The bunkers have exceeded their life cyle,” Steve Wenzloff, tour vice president of design services, said in a Thursday Hartford Courant story. “The bunkers will be renovated with new sand and turf-face style look.”

The sand-faced bunkers that are part of the Bobby Weed redesign washout during New England thunderstorms requiring a massive amount of time and labor to rebuild.

According to Degrandi, the grass-faced style will be as labor-intensive to maintain as the current ones but withstand storms better.

“It will make rebuilding after a thunderstorm ridiculously easy,” he said.

He said the Tour also plans to eliminate some bunkers and relocate other to “make them more relevant to play.”

River Highland has 119 bunkers, three fewer than when the course opened.

Degrandi said the plan is to go with a synthetic liner called Mirafi that will be fastened to the soil by an impact hammer, as was done on the bunkers at TPC Boston.

According to DeGrandi, the Tour has been experimenting at River Highlands with the bunker lining and proposed replacement sand.

The first golf course on the site of what is now River Highlands was Middletown Golf Club and opened in 1928. It was designed by  Robert “Jack” Ross and Maurice Kearney. It’s name was soon changed to Edgewood Golf Club. In the late 1980s the Tour purchased the property naming it TPC Connecticut and underwent a significant renovation under the guidance of architect Pete Dye. In 1989 TPC River Highlands (spelled for a short time as Riverhighlands) opened after a significant renovation by Weed, who had worked for Dye, with Tour Players Roger Maltbie and Howard Twitty acting as consultants. Additional land was purchased where holes 10-13 and the majority of 14 are now located.

The Travelers Championship has been held at the River Highlands site since 1984 when it was known as the Sammy Davis Jr., Greater Hartford Open.