It was almost hard to grasp seeing the Yale Golf Course in its current state.

There are massive dead spots on nearly every green, fairways, too, have areas of black. The putting surfaces are also spongy and feel over-watered. Approach shots leave deep ball marks. Crabgrass is thriving everywhere, but especially on tees. Many bunker banks look as if they have not been mowed in days, perhaps a week or more. 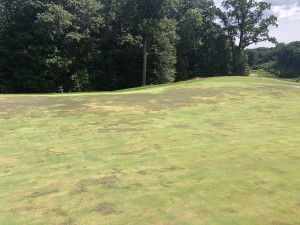 The left side of the eighth green on the Yale Golf Course. (Photo by Anthony Pioppi)

It’s been a hot dry summer in Connecticut but the weather is not the reason for the state of the golf course. Lack of basic maintenance appears to be the culprit.

Yale was designed by Seth Raynor with Charles Blair Macdonald in the self-described role of consultant. The layout officially opened for play in 1926, a few months after Raynor died. It is among his two-or three best works.

The course has a stunning set of green complexes that can bring first-time golfers at Yale to a standstill with their size and boldness. Repeated play reveals the intricate subtleties that vex golfers on every hole. The first green alone is approximately 15,000-square feet, two-tiered, and a combination of a Punchbowl and Road Hole greens. It just might be Raynor’s finest remaining creation.

Shockingly, it has been confirmed to me that the phenomenal greens are slated to be blown up as part of the two-year renovation scheduled begin in late summer of 2023. Seventeen of Yale’s putting surfaces are original, only the third is not. The reason given to me for the drastic step is that supposedly the green construction is no longer working. In other words, they cannot drain or hold water as intended and healthy turf cannot thrive on them. 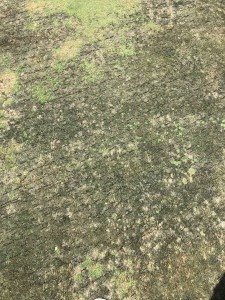 A closeup of the eighth green on the Yale Golf Course. (Photo by Anthony Pioppi)

Gil Hanse has been hired by a wealthy group of alumni to redo the course. Work is slated to begin in the fall of 2023, a year after the original date. It is scheduled to take two years.  The school reportedly has little or no formal role in the work or decision-making.

As for the dead turf and thriving crabgrass, I am not laying blame on the Yale superintendent or maintenance the staff. I have no inside information as to what is going on there. I do know, however, that when I played on a recent Tuesday, teeing off at 11 a.m., we saw not one maintenance person on the course, did not hear a single mower, and when we passed the maintenance building around 2:30 p.m., there was not a car in the parking lot. At least two greens received water from irrigation heads in our time there, a dry day with temperatures in the mid 80s.

“I wanted to ask for my money back,” one person emailed me after a recent round. 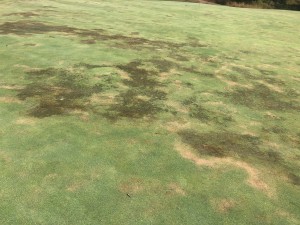 I sent photos that I took of the Yale greens the day I played to a number of professionals highly respected in the golf turf industry. Every last one of them was stunned. Because they were not working in a formal capacity on the Yale course, they asked that their names be omitted. None faulted the conditions on the construction of the greens.

“That’s some serious sh*t right there,” one commented after viewing the images and gave a variety of possibilities, none good, as to why so much grass has died.

Another opined that without being on the greens it would be difficult to assess what was exactly going on but that it looked like a combination of wet wilt and algae had killed turf. Wet wilt can be the result of a combination of high temperatures and excessive water, in this case irrigation. Connecticut is in the midst of an extremely dry summer.

Another thought algae and possibly fairy ring were prevalent. Both agreed that the grass in most of the brown and black areas was dead and aggressive overseeding will be needed to get them back.

“Oh my goodness. What makes them think $20,000,000 will fix that?” another replied, referring to the rumored cost of the project, adding that common maintenance procedures would have prevented what has occurred on the greens.

“This is a water issue, plain and simple,” another turf pro commented. Possibly a combination of too much water at times and too little water at other times was his educated assessment of the cause.

Even as the turf dies off, the university is selling tee times. The course is open for play to the general public at $125 per round, golf cart included. Costs decrease for categories such as students, faculty, alumni, guests of alumni, etc. Tee times are every 15 minutes.

Yale has a talented golf course superintendent now. So, what has happened? Is it a lack of manpower? It is lack of funding to provide for basic necessities like pesticides? Is it a combination of both or something else altogether? 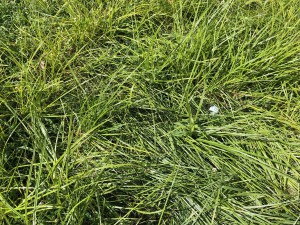 A golf ball nestled in nutsedge on a bunker bank of the Yale Golf Course’s 12th hole. (Photo by Anthony Pioppi)

As I have noted repeatedly, almost since the day it opened, the Yale administration has ignored its world-class golf course. Maintenance was/is underfunded. For years basic cultural practices were ignored. One superintendent even made significant and horrible architectural alterations such as removing features on greens without consulting his superiors.

For roughly 12 years, though, under the previous superintendent, the tide turned. Trees came down, greens were expanded to their original dimensions, putting surfaces, fairways and tees were aerified, top dressed and overseeded. The turf was the healthiest it had been in decades.

The summer of 2022 is not over and the summer of 2023 could be hot and dry, as well, or perhaps hot and wet. With either one of those scenarios, what the Yale course turf will look like in 2023 is a frightening thought, inevitably worse than what is there now.

One Response to “The Yale Golf Course is in Abhorrent Condition, What Are the Reasons?”