The American Society of Golf Course Architects announced today that Geoffrey Cornish, a native of Canada, has passed away at his home in Amherst, Mass. at the age of 97.

Cornish, with whom I was friends, was the last link to the Golden Age architects, including Canadian Stanley Thompson, for whom he worked alongside a young Robert Trent Jones. 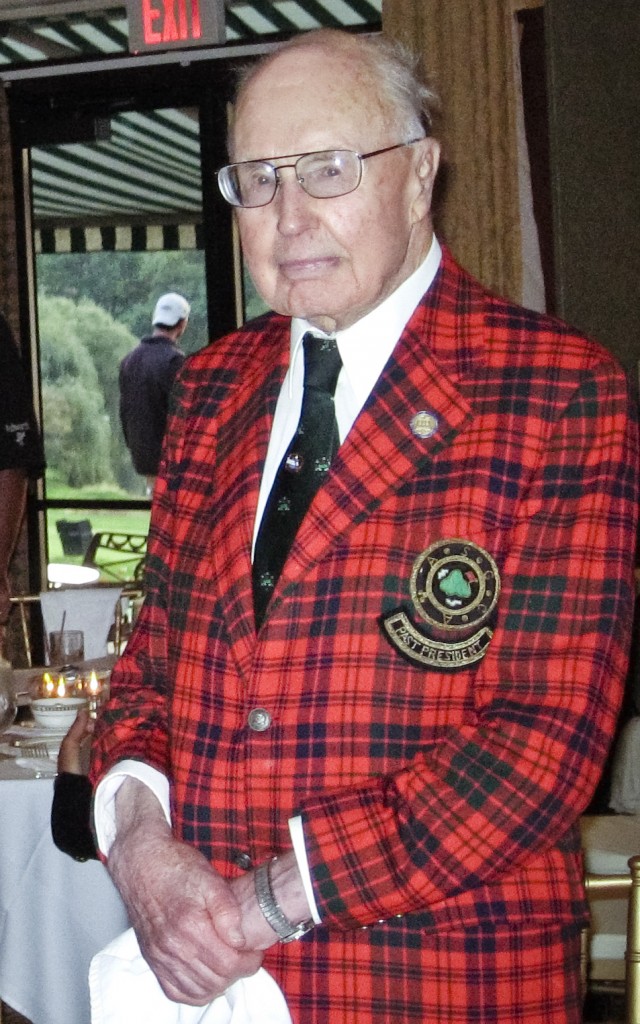 Cornish was known as much for his charitable work in and outside of golf was he was for the over 240 golf courses on which he worked.

Architect Brian Silva partnered with Cornish for over 20 years before establishing his own practice.

“In this era of endless top this and top that lists ad nauseum, we forget about the folks who produced golf for functional budgets and allowed the lifeblood of the game to take up the game. Mr Cornish was front and center in this regard,” Silva  wrote me in an email. “But that wasn’t giving enough for Geoff…winter school for turfgrass managers at the University of Massachusetts-Amherst for decades and decades, assisting in teaching with Lawrence Dickinson who started the turf program at UMass and the Stockbridge School of Agriculture, helping out for decades with the UMass turf conference, GCSAA seminars and speaking engagements ad infinitum, his writings about golf architecture.”

Silva said it was Cornish’s attitude towards others that was the hallmark of the man.

“One of my greatest good fortunes has been to spend so much time with a great gentleman who could not have been any more selfless with his time and efforts. We entirely fortunate ones have awesome memories of a guy the likes of
which we will never again encounter,” Silva wrote me.

Until his final days, Cornish retained his enthusiasm for golf course design. He was a prolific letter writer. Over the years, I turned to him for historical information via the U.S. Mail and would have a reply within a few days. Our last correspondence was my asking for his recollection of the Connecticut-based architect Robert J. Ross, who designed only a handful of layouts. Cornish had a wonderful memory and his personal interaction with so many architects so long dead was a time portal into the past.

Cornish’s recounting of his personal experiences with the master architects was always fascinating. For the piece I wrote for Golf Course Architecture profiling Cornish, he recalled three of the biggest names.

“Great at times,” he said of A.W. Tillinghast, but added a caveat.  “Tilly, I’m afraid he took to alcohol too much.”

There was no doubt of the quality of his courses, though.

“Many thought he was the greatest architect of that time,” Cornish told me.

Through Thompson, Cornish also encountered Donald Ross, who he called a, “perfect gentleman” and “a tremendous person.”

Alister MacKenzie, whose brother homesteaded in Saskatchewan, would invariable visit Thompson at his office in Toronto when visiting Canada.

Cornish said MacKenzie, too, like Thompson and Tillinghast, took to the bottle too much but was, “a pretty good fellow.”

Here is the ASGCA press release.

Geoffrey Cornish, a Fellow of the American Society of Golf Course Architects (ASGCA), died February 10, 2012 in Amherst, Mass. He was 97.

Cornish, an ASGCA Past President and native of Winnipeg, Manitoba, Canada, designed more golf courses in New England than anyone. He and his associates designed 240 golf courses in the United States, Canada and Europe, including: the International Golf Club, Bolton, Mass.; the Center Valley Club, Center Valley, Pa.; and the New Ashburn Golf Club, Halifax, Nova Scotia, Canada. He continued to serve until his death with Mungeam Cornish Golf Design.

He wrote many books and co-authored the landmark reference book, “The Architects of Golf,” which allowed readers, for the first time, to obtain specific information about the architectural history of their favorite golf courses while learning more about the people who designed them. For years, Cornish presented to groups around the world on the history and practice of golf course architecture.

He received his bachelor’s degree in agronomy from the University of British Columbia and his Master’s and honorary doctorate from the University of Massachusetts. Cornish was introduced to golf course architecture in 1935 when evaluating soils for Capilano Golf Club, then under construction by Stanley Thompson in West Vancouver. Cornish soon joined Thompson for training and four years later became greenskeeper at St. Charles Country Club in Winnipeg.

Cornish served overseas with the Canadian Army during World War II, but rejoined Thompson in 1946.  He left for a five-year association with pioneer turfgrass scientist Lawrence Dickinson at the University of Massachusetts before opening his own practice in 1952 in Amherst, Mass.

Cornish joined the American Society of Golf Course Architects in 1967. He served as ASGCA president in 1975-76 and co-chaired the ASGCA History Committee with Dr. Michael Hurdzan, ASGCA.

Cornish was predeceased by his wife Carol. No formal funeral services are planned.

ASGCA President Rick Phelps:
“Mr. Cornish was a true gentleman and exemplified the highest traditions of ASGCA and the game of golf. His exceptional work as a golf course architect, author and lecturer cannot be overstated. Mr. Cornish’s contributions to the profession of golf course architecture and the golf industry will live on for generations.”

Mark Mungeam, ASGCA (partner in the firm of Mungeam Cornish Golf Design):
“I was honored to work with Mr. Cornish. He was a true gentleman and wealth of knowledge on golf design and golf in general. He brought so much to public golf as he wanted to create courses that people could really play. Golf, especially in New England, would not be the same without him. Everyone who ever worked with Mr. Cornish knew how he would walk and study a golf course. He would show up for an 8 a.m. meeting at 6 a.m. and walk the golf course, carefully assessing the layout before the meeting even began.”

Dr. Michael Hurdzan, ASGCA (co-chairman with Geoffrey Cornish of the ASGCA History Committee):
“Geoffrey Cornish, Bob Graves and Jack Kidwell were as close to saintly men as possible, so for ASGCA to have them as members and past presidents was a blessing. They never spoke ill of anyone or anything, they were true friends to whomever they met, and they gave the game of golf and the profession of golf course design a refined dignity. Geoffrey Cornish was the “Dean” of that group, and he leaves behind a long legacy of great golf courses and golf course designers that he mentored. Geoff was a special man by every and any measure, and every day spent with him was a treasured memory. He will be missed.”