ASGCA Past President Rees Jones has been selected by the American Society of Golf Course Architects as the 2013 Donald Ross Award recipient. The award will be presented April 22, 2013 during the 67th ASGCA Annual Meeting in Reynolds Plantation, Ga. The award is named for ASGCA’s honorary first president, and is presented to an individual who has made a positive contribution to golf and golf course architecture. 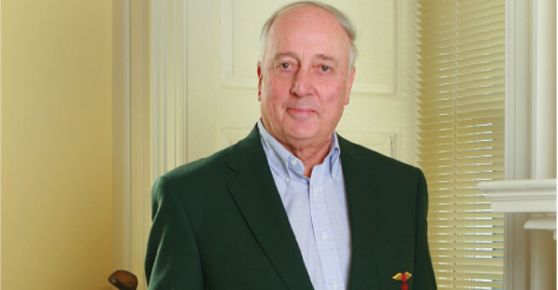 He earned a B.A. from Yale University and studied landscape architecture at Harvard University. He began his career in golf course architecture in 1965, working for 10 years under his father, Robert Trent Jones, the first Ross Award recipient in 1976. He opened Rees Jones, Inc. in 1974 in Montclair, N.J., and has led the firm ever since.

Jones has been recognized many times for his contributions to the game. His awards include the 1998 Metropolitan Golf Association Distinguished Service Award, the 2002 Metropolitan Golf Writers Distinguished Service Award, Golf World Magazine’s 1995 Golf Architect of the Year, the 2004 Golf Course Superintendents Association of America’s Old Tom Morris Award and two architectural awards from the International Network of Golf.  In 2012, Rees was inducted into the New Jersey Sports Writers Association Hall of Fame. The Foundation for Long Island State Parks and the New York State Office of Parks, Recreation and Historic Preservation honored Rees with the Robert Moses Master Builder Award in 2012.