Approaching the clubhouse at Duck Woods

Duck Woods Country Club, one of the oldest courses on the Outer Banks, is like the home of a family with old money. It’s quiet. It doesn’t need to impress anyone. Parvenu courses feature flashy elements like greens with more tiers than the papal tiara.  Duck Woods honors the old-fashioned virtues, like course conditioning and restrained design. 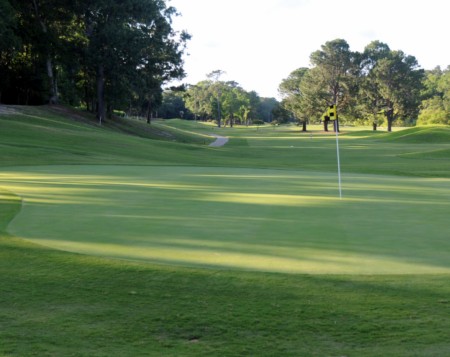 The 9th at Duck Woods

Ellis Maples laid out the course back in 1969. In those days, the Outer Banks looked much different. The pavement ended in Southern Shores. Places like Duck and Corolla, now jammed with houses from the Atlantic Ocean to Albemarle Sound, consisted largely of sand dunes, lighthouses and a few cottages. Getting to them required a four-wheel drive vehicle–or a boat. Duck Woods was built where the Wright Memorial Bridge from the mainland hooked up with the Croatan Highway that led down to Nags Head and the Hatteras National Seashore. Today, the Duck Woods neighborhood has a solid, settled and mature look. Live oaks line the roads. The houses are modest in comparison to the McMansions lining the beaches in the more recently developed Duck, Pine Island and Corolla. The golf course also has a settled, mature feeling.

Ellis Maples got his start in golf working as a superintendent for Donald Ross at Pinehurst, so he was well-schooled in classic design. There’s more than a hint of Ross’s style at Duck Woods. Fairways lie gently on the land. The course marches straightforwardly away from the clubhouse, loops back, then repeats the pattern on the second nine. Just as at Pinehurst, there are houses on the perimeter of the course, but they don’t impinge on it. 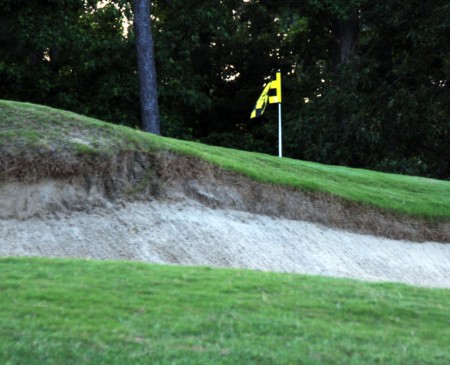 The 8th at Duck Woods is carved into a hillside

But Ross rarely, if ever, had to work around as much water as Maples did at Duck Woods. Water is in play on all of the first seven holes. A wetland flanks the right side of holes 1 and 2 and both fairways are cut by creeks. Ponds guard the greens on Nos. 3 and 4. The tee shot on No. 7 has to carry a lake. The back nine has a few more dry holes, though not many. But, to Maples’ credit, the course feels fairly roomy despite the water. The fairways are spacious and there is often, but not always, a bailout alternative for players who can’t seem to get the ball airborne when they see hazard stakes.

Maples pushed up dirt to make his green complexes. They’re not dramatic, but they’re got some movement, and their elevation will rebuff poorly struck approaches.

It’s the presentation of the course that distinguishes Duck Woods. The greens when I played were smooth and true; they’re kept at medium speed. Balls sat up on the plush, Bermuda fairways. The bunkers were carefully groomed.

That may be because Duck Woods is for the most part a private club.  It accepts a limited amount of outside play, evidently based on the tax code. (It can’t allow its revenues from non-member sources to exceed a certain percentage.) So there’s no guarantee that if you pick up the phone, you’ll get tee time. But the course is worth taking the trouble to ask.