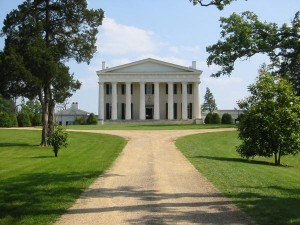 SOUTH BOSTON, VIRGINIA — The pace becomes syrupy slow as you gently wind your way along an inconspicuous farm road through the rustic countryside of South Central Virginia, just across the North Carolina border on the north side of the Dan River about three miles west of South Boston. My destination is the Berry Hill Resort & Conference Center, a former antebellum plantation estate that now serves as a Four Star retreat rapidly gaining renown as a sought-after destination for romantic getaways, wedding celebrations, corporate events and social gatherings.

The breathtaking landscape of the surrounding countryside is lined with long strands of white picket fences, lush, rolling hills and tranquil blue bodies of water. Entranced by the scenery, one might otherwise drive right by the modest stone gate with a sign that reads, simply, “Berry Hill.” It is not until you turn into the plantation and complete the half-mile, tree-lined drive toward the white-columned master home that one truly feels as if they have been transported to a different time and place. Traversing land that has previously known the footsteps of Native American tribes, Colonial planters and slaves, Union and Confederate soldiers and some of the Commonwealth of Virginia’s most distinguished families, Berry Hill could instead be called, “Tara.”

When he died in 1837, James Bruce was the third wealthiest man in America, his estate being valued at nearly three million dollars — a nearly unimaginable sum in those days — but more important in this neck of the woods, he was also the first agricultural millionaire in our country’s history. Seven years before his death, Bruce had purchased from General Edward Carrington, nephew of his first wife Sally Coles, the old Coles-Carrington estate called Berry Hill, which was located near the courthouse. The land had originally belonged to William Byrd II of Westover, to whom it was granted in 1728 by the Crown for Byrd’s service in helping draw the dividing line between Virginia and North Carolina. The property would change hands several times throughout the years with ownership by a number of notable Virginia families including Benjamin Harrison, fourth Governor of Virginia and a signer of the Declaration of Independence.

In 1833, James Cole Bruce began construction of the present mansion, choosing to remodel the old Isaac Coles house, built about 1770, which stood on the estate. Berry Hill’s architecture of is pure Doric, with a perfectly proportioned pediment upheld by eight massive columns of brick, stuccoed and fluted. The three-foot thick walls of the mansion are likewise of stuccoed brick that was made on the place. Granite for the floor and steps of the seventy-foot wide portico and for the windowsills came from the plantation quarry; while that which frames the doorway is of a much finer quality and was imported from Georgia.

Erected by slave labor at a cost of nearly $100,000, the mansion contains 17 rooms and a great entrance hall, the latter dominated by a breathtakingly beautiful, mahogany “horseshoe” staircase, acclaimed by the late Dr. Fiske Kimball as one of the finest stairs in this country. Two separate flights rise along the sidewalls to a landing at the back of the hall, where they join and sweep upward over the hall to the second floor. The lack of visible support for the stairs has puzzled architects for decades, and one wonders how plantation artisans without trained help could have built it.

Then, as now, quiet luxury best described the interior of Berry Hill. The mantels in the 10 major rooms are of imported Italian marble; those in the parlor and library are very elaborately carved, with caryatides supporting the shelves, and show a very strong French influence. Marble baseboards, ornate plaster ceilings and cherry floors vie for attention with furniture of mahogany and walnut, in styles ranging from Chippendale to Victorian. The only original wallpaper remaining, that in the dining room, is a stunning flock design in olive and gilt, and was imported at the time of the remodeling. Bruce family portraits and paintings grace the ample walls, and Bruce books line the library shelves.

James Bruce was a man of exquisite taste, so it was only natural that silver would play a large role in his home. During the Bruce occupancy the mansion was noted for the extraordinary collection of silver housed within it. Besides the usual candelabra, coffee services, flatware and serving pieces, there were plates, goblets, finger bowls, and such; and massive washstand sets of the precious metal in every bedchamber. Today, the silver remains in every room in the form of plated hardware on doors, windows, and blinds, and on the small round bell pulls, tarnished now from lack of use.

In 1968, Berry Hill was chosen for inclusion in the book, “Architecture in Virginia,” and the reasons for its selection are appropriate: “Berry Hill was almost the last of the great houses to be built in Virginia,” wrote the book’s author. “Its isolated site lends an almost overpoweringly romantic aura to the distinction of its carefully executed portico flanked by two small Doric pavilions. The entire composition is on as grand a scale as any of Virginia’s domestic architecture, with the possible exception of the Governor’s Palace in Williamsburg. It is a notable achievement, particularly when one realizes that it was carried to completion in a remote area of the Commonwealth. This isolation gives the entire composition as almost theatrical air of romanticism, in spite of the classic forms of the three buildings that frame the forecourt.”

Following a century of Bruce family ownership, The Berry Hill Estate was sold and sat vacant until 1997, when a France-based global corporation joined forces with the Virginia Board of Historic Resources in an ambitious collaboration to restore the property to its original grandeur. After its multimillion-dollar restoration and conversion in July 1999, The Berry Hill Estate celebrated its grand re-opening as a private executive conference facility and leisure destination. It was purchased by its current ownership in 2007 and turned into one of Southern Virginia’s premier conference centers and a resort open to the public, ideally suited for weekend getaways, wedding celebrations, corporate events and social gatherings.

Guests enjoy a gracious Southern ambiance in 88 tastefully appointed rooms, each furnished with Italian handcrafted beds — four-poster canopied queen beds or sleigh beds — along with beautiful antiques and reproductions. Most rooms open to a spacious veranda offering sweeping views of Berry Hill’s 650-acre estate and indeed, from towel warmers to high-speed internet connections in the room, not a single aspect of luxurious comfort has been overlooked. In addition to the guestrooms in the hotel complex, Berry Hill also offers a pair of modern and totally renovated historic cottages on the grounds as well as two suites located within the Mansion.

Diversions and activities on the grounds are aplenty, although first on the agenda should be a tour of the main house, a National Historic Landmark. Guests are encouraged to stroll around the beautiful park-like setting, enjoying the gardens and beautiful landscaping, while on the periphery are stone ruins and historic 200-year old cemeteries. On a more modern note, guests may avail themselves with a wealth of recreational activities including the Blackberry Spa, indoor swimming pool, men’s and women’s sauna, fitness center, tennis courts, biking on five miles of trails, fishing in a stocked pond, horseshoes, croquet, bocce, petanque, soccer, football and volleyball. Guests have access to several enjoyable golf courses in the area including Green’s Folly in South Boston, a pleasantly rolling layout highlighted by a 700-yard-plus, par-6 finishing hole. Or you may choose to play billiards, or get-together with friends in the mansion’s library, lounge, or on the terrace for casual conversation and your favorite beverages, while Berry Hill’s outdoor amphitheater provides another venue for gatherings or evening entertainment. Finally, for motor sports racing enthusiasts, the VIRginia International Raceway and South Boston Speedway are nearby, and the surrounding area offers a variety of interesting excursions including exceptional antiquing.

After all this activity guests have surely worked up an appetite, and whether they are hoping to savor a thick juicy steak, dine in a more intimate informal setting, or just enjoy a casual lunch with their kids, Berry Hill guests have several choices of dining establishments and experiences — each of the resort’s three restaurants featuring distinct menus and settings that reflect the history and Southern hospitality characterizing the resort. Kids can find their favorite foods on special menu’s in Carrington’s Restaurant, which serves dinner in the historic mansion, and Darby’s Tavern, which is tastefully decorated with replicas of authentic barn signs from the 1800’s and tin covered tables and located in the former kitchen of the old tavern, while perhaps the most eagerly awaited event at Berry Hill is the resort’s famous Sunday Feast lunch buffet, served in the Grand Ballroom.

Given its centuries-old history, how has Berry Hill remained so inconspicuous? My suggestion: Discover the Berry Hill Resort and Conference Center now, before the rest of the world learns of its charm and luxurious grace.

One Response to “Berry Hill, an Antebellum Outpost to Remember”