Bolstered by leaderboard packed with fan favorites and a popular champion making his long-awaited return to the winner’s circle, the 75th playing of the Wyndham Championship was one for the books. 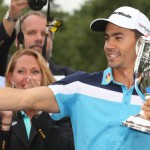 GREENSBORO (August 17, 2014) — In his early days on the PGA Tour, dashing Colombian Camilo Villegas earned the nickname “Hombre Araña” (“Spiderman”) for the crouching, contortionist pose he assumed when reading greens.

The Florida Gator four-time All-American became a fan favorite — particularly among the female sect — after capturing both the BMW Championship and the Tour Championship in the span of one month, October 2008.

But his last Tour win, the 2010 Honda Classic, came four agonizingly long years ago — or, in the world of professional golf, a veritable lifetime.

Trailing by four shots after 54 holes, Villegas book-ended first and final-round 63s to win the 75th edition of the Wyndham Championship by one shot over Bill Haas and Freddie Jacobson.

“You got to stay strong and keep working,” said Villegas. “I’ve always done that. I’ve always been a hard worker and always kind of believed in myself, sometimes more than others.

“(I’m) just happy to be right here right next to this trophy.”

On Sunday, Villegas recorded seven straight 3s en route to a front-nine 29. Three other players — Jacobson, Nick Watney and Heath Slocum — reached 17-under at some point in their final round.

Villegas posted his number first and headed to the Sedgefield clubhouse, where he said he was simply hoping to get into a playoff. Instead, every other contender stumbled home — and Villegas didn’t have to hit another shot to win.

“I didn’t want to go to the range,” Villegas said. “I stayed (in the clubhouse). There was TV, nice air conditioner there in the scorer’s tent. I was hanging there with my caddie and watch a little golf.

“(It is) tough sometimes when you’re watching it, you can’t control. When the boys got closer to the last hole, you get a little anxious and you don’t have a golf club in your hand — you can’t control. Sometimes it’s better to be on the golf course.”

Heading into the 75th Wyndham Championship, Villegas had made 17 cuts in 25 starts this season, but remained in search of for his first top-10 finish.

Sunday’s victory not only earned Villegas the winners payout — $954,000 of the Wyndham Championship’s $5.3 million purse — it propelled him into the 37th position of the 2014 FedEx Cup entering the championship playoffs. Villegas also earned an invitation into the 2015 Masters Tournament and two years full-exempt status on the PGA Tour.

“Just the nature of the game,” Villegas said. “Ups, downs, good years, average years, bad years — and if you ask any player out in the field everybody wants to play better.

“The game has been good to me. I have no complaints. Do I want to play better? Yes. Do I feel like I have played to my potential the last two and a half years? No. But again, it’s not everything about golf. You got to be little bit easy on yourself and just enjoy life.”

The other major subplot at Sedgefield was the last-gasp push for spots in the PGA Tour’s playoffs, which begin this week at The Barclays in New Jersey.

Slocum, who arrived at No. 158 on the points list, was briefly at 17-under but closed with two bogeys that also helped keep him out of The Barclays field. He finished at No. 129. Martin Laird, who was at No. 136, was near the lead all weekend but his tie for 14th could only propel him to No. 127.

Paul Casey, 125th at the start of the week, tied for 18th to put himself safely in the field. Sang-Moon Bae played his way into the playoffs with a tie for 14th that moved him to No. 120. Jhonattan Vegas was at No. 124 but kept himself securely in the field with his tie for eighth.

PGA Tour Commissioner Tim Finchem paid a surprise visit to Sedgefield on Sunday and talked about how the Wyndham Championship has thrived and grown through its 75-year history.

“(The Wyndham Championship) has had a few moments like every tournament does where all the parts didn’t come together for a period of time, a few months, and it looked like maybe it was going to struggle but it’s always come back strong, I think more in the last few years than ever,” Finchem said.

“Great sponsors in Wyndham and BB&T. Terrific work by the tournament organization here, really good golf course. In my view, at least in the last eight, 10 years the tournament has done what you really want to see a PGA Tour event do, that’s get better every year. … So, it’s been a good trend here.”

The FedExCup Playoffs don’t begin until next week at The Barclays. With players in Greensboro trying to cement their position in the top 125, however, Finchem said the atmosphere around Sedgefield almost felt as if the Playoffs had begun.

“The Wyndham is kind of a play-in and you see this field affected by players who really need to play well to get in next week which is the same phenomena you have during The Playoffs and then you see players who are in but want to improve their position,” Finchem said.

“Right now our intention would be that the Wyndham would be the same position of leading in, being the play-in to The Playoffs. That’s been our assumption for a while. Great time of year here, tournament works well here as well. So, I think that’s probably where we’ll end up, in all likelihood.

“In that sense, (the Wyndham) is part of The Playoffs and, you know, we like to think of the FedExCup as starting when we start the season in October and go in the year and then it just escalates and so that’s had a very positive effect on this week.”

As for the former “Spiderman,” the Wyndham’s newest member of the Wall of Champions said he was thrilled to be part of such an esteemed fraternity.

“In terms of Wyndham, they put such a great show,” Villegas said. “I’ve been coming here many years. (Tournament Director) Mark Brazil does a hell of a job.  He’s a good friend of mine.  And the golf course keeps getting better and better every year.

“I played good here before and once again, man it feels good to be the champion this year.”