The Web.com Tour’s Rex Hospital Open returns to the TPC at Wakefield in 2015, highlighting a run of elite championships contested at McConnell Golf venues across the Carolinas.

RALEIGH, N.C. (May 2015) — The Web.com Tour’s 2015 Rex Hospital Open — scheduled May 25-31 for the 15th consecutive year at Raleigh’s TPC at Wakefield Plantation — highlights a run of nine professional, collegiate, amateur or elite junior level events in April and May alone contested on highly regarded golf courses around the Carolinas owned by Raleigh-based McConnell Golf. 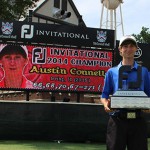 On the April calendar, five tournaments were competed over four of McConnell’s 10 courses. A trio of other McConnell designs joins the fun during the four May events, highlighted by the Rex Hospital Open. In total, 14 major 2015 tournaments will be contested at McConnell Golf venues — capped August 17-23 by the PGA Tour’s Wyndham Championship at Greensboro’s Sedgefield Country Club Ross Course.

“We pride ourselves on providing a championship test for the finest golfers at every level,” said McConnell Golf Founder and CEO John McConnell, who has incorporated his computer software marketing expertise to help spread the word and coin the McConnell Golf mantra: “Pure Golf for the True Golfer.”

McConnell Golf’s TPC Wakefield opened in July 2000 and one year later began hosting the popular Web.com event. Another McConnell property, Raleigh Country Club, served as the event site for three years starting in 1998, when the Web.com was known as the Nike Tour.

Meanwhile, Sedgefield Country Club’s Ross Course played host to the 38th Carolinas Club Pro-Am Championship on April 27. Sedgefield Ross Head Professional Eric Ferguson and member Scott Harvey, fresh off his appearance at The Masters, incorporated both immense skill and local knowledge to win the event with an impressive round of 8-under 63. Treyburn’s Director of Golf Tag Wylie and Tim Myers shot 65 to finish in second place for the second consecutive year. McConnell Golf teams have won three of the past five years.

On April 24, Ryan Sullivan of Winston-Salem claimed his first career eGolf Gateway Tour title at the third-annual Sedgefield Classic. Sullivan’s week on the demanding Sedgefield Country Club Dye Course began with a 3-under 137 total through 36 holes. He used a late birdie to notch his first career tour win and earn the event’s $14,000 first-place prize. Of note, Sullivan also won the inaugural High School Invitational, the only time held at Raleigh Country Club.

Some of the recent high school invitational participants donned their new school colors when Old North State Club in New London hosted the ACC Men’s Golf Championship for the 14th-straight year and 19th time overall. In the 2015 edition, defending champion Georgia Tech made four birdies on the second playoff hole to defeat Clemson. Both teams finished 54 holes with a team score of 19-under 845, forcing a playoff.

At the 2015 ACC Women’s Golf Championship at Sedgefield Ross, Virginia ran away from the competition, posting a 27-under team score to capture the school’s first ACC tourney title. The Lady Cavaliers also became the first champion to come from outside the state of North Carolina.

Along with the Rex Hospital Open at TPC Wakefield on May 25-31, other May events on McConnell Golf courses include the 4A High School Regionals at Raleigh Country Club on May 5, the Symetra Tour Friends of Mission Charity Classic at The Country Club of Asheville on May 15-17 and the 89th Carolinas Women’s Amateur at Treyburn on May 19-21.

On June 8-12, 84 of the world’s best junior boys will compete in the AJGA FootJoy Invitational, contested for the eighth time at Sedgefield Ross. On June 16-19, the 19th NC Junior Girls will be contested at Greenville’s Brook Valley Country Club, while the prestigious Cardinal Am returns to Sedgefield Dye on July 17-19. The McConnell Golf Triangle Fourball will be played at both Treyburn and Wakefield on August 15-16.