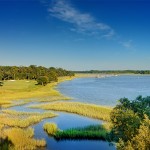 CHARLESTON, S.C. — The haunting beauty, native lore and historic tradition of South Carolina’s Lowcountry will surely bask in the world’s spotlight August 9-12, when the PGA Championship is contested on the Ocean Course on Kiawah Island.

As assuredly, PGA Championship spectators wishing to play golf when they are not watching it could not find a golf course more representative of the Lowcountry’s look and feel than The Links at Stono Ferry (www.StonoFerryGolf.com).

This renowned Ron Garl-design located less that 30 minutes from downtown Charleston hearkens back to both the Civil and Revolutionary Wars, while offering golfers a spectacular setting along the pristine Intracoastal waters and salt marshes of South Carolina.

Tracing its roots back before the Revolutionary War and offering the type history golfers would expect to find in Charleston, the actual Stono Ferry site was used by plantations to ferry their goods across the Stono River, and as a redoubt and battery site in both the Revolutionary and Civil Wars.

On The Links at Stono Ferry’s 12th hole, there is a cannon pointing at the old ferry landing, and one bunker on the course was part of a Revolutionary War battlefield. Meanwhile, part of the 13th hole is laid out where an old railroad line ran from Charleston to Savannah from the 1850s all the way up to the 1960s.

Stono Ferry’s owners have set out to preserve and protect the environment with respect for the poignant reminders of its rich and storied past, and an appreciation of unique Lowcountry cultural traditions.

“The total Stono Ferry experience, and our commitment to making it the best it can be, reach far beyond tees, greens and fairways,” said Stono Ferry club manager Greg Wood, 2010 Carolinas PGA Section Merchandiser of the Year and Regional Ping Clubfitter of the Year.

Stono Ferry opened in 1989, giving the Charleston area a beautiful golf course enjoyably manageable from the championship tee yardage of 6,814, with four other sets of tees all the way up to 4,966 yards.

“Our golf experience reflects our dedication to consistently provide superior course quality and playability for our members and guests,” said Wood, “while simultaneously fulfilling our responsibilities of environmental stewardship and historic preservation.”