In a year dominated by the 20-something budding superstars — Jordan, Rory, Jason, Rickie — it was a pair of elder statesmen who made the 2015 Wyndham Championship one for the ages.

GREENSBORO, N.C. — Admit it now; even after a few weeks’ hindsight and historic perspective, one would have a hard time scripting a more Hollywood-type storyline than the 2015 Wyndham Championship at Greensboro’s Sedgefield Country Club.

First the Tiger Effect, which became a tsunami: Record numbers across the board and viewership off the charts everyday. Tiger loved the Triad and the Triad loved him back. 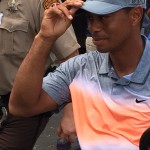 After his appearance led to record attendance and TV viewership, Tiger Woods gave a tip of the cap to the Wyndham Championship and its fans, and Sedgefield CC.

Then the golf: a Sunday shootout leaderboard with some of the world’s most talented up-and-comers battling several of the game’s legendary elder statesmen — along with a few others looking to establish a name for themselves — for not only a nearly million-dollar prize, but also the right to continue their playing seasons.

Such is the benefit now of the Wyndham Championship’s strategic calendar positioning as the final opportunity for some players to move into the Top 125, thus securing exempt status for the following season and qualifying for the FedExCup Playoffs, while those already qualified for the Playoffs can improve their seeding.

That, along with extended title sponsorship from Wyndham Worldwide starting in 2007 and the move back to Sedgefield’s Donald Ross Course in 2008 have been major factors in the tournament’s exciting resurrection. In fact, even before 14-time major champion Tiger Woods committed to play in the 2015 Wyndham Championship, the field had already shaped up as among the most exciting in tournament history.

In the end, the ending was hard to believe. Yet even as Tiger came up just a little short and wasn’t quite able to provide the story’s final exclamation point, what more could golf fans ask for than a 51-year-old grandfather and Tar Heel favorite son rediscovering the magic while making a little history of his own?

Davis Love III and his masterful, bookended 64s for the week gave the 2015 Wyndham a champion few might have imagined, and yet a perfect champion. Next year’s Ryder Cup captain was born in nearby Charlotte and went on to Chapel Hill becoming the greatest golfer in University of North Carolina history, and later a two-time Greensboro winner when the event was contested at Forest Oaks CC.

This year at Sedgefield, Love took advantage of some putting green advice from none other than El Tigre himself to earn his 21st PGA Tour title and become the third-oldest PGA Tour winner in history — not to mention the only player other than Sam Snead to win the Greensboro event more than twice in its 76-year history.

Love finished at 17-under 263. Third-round leader Jason Gore shot 69 to finish one shot back. Scott Brown (68), Charl Schwartzel (66) and Paul Casey (67) were two strokes behind Love, who won for the first time since the 2008 Children’s Miracle Network Classic in Florida.

With his victory at Sedgefield, Love also clinched a spot in the FedEx Cup Playoffs, a berth in next year’s Masters and Player’s Championship — and perhaps even a well-deserved spot in the World Golf Hall of Fame.

“Absolutely incredible. I am still in shock that Davis won, but we love it,” said Wyndham Tournament Director Mark Brazil. “He’s one of our best friends. What a quality human being.”

“(Winning) means a lot here at Greensboro,” said an emotional Love. “They’ve always been good to me for a long, long time. Mark Brazil and Steve Holmes and Bobby Long have really turned this tournament around.

“It’s thrilling to do it here where I played at North Carolina but to get a win after all that I’ve been through the last few years, so many people have stuck with me from my caddie, Jeff Weber, teachers, therapists, doctors,” Love said, “I’ve been through two really big surgeries and to bounce back from it I’m happy to just playing. I’m blessed. To win is a big bonus.”

As popular as Love’s historic victory may have been, however, the aftershocks of Tiger’s first appearance in the Triad are likely to reverberate for years. Woods committed on Friday during the PGA Championship, yet still there remained skepticism through the weekend as to whether or not he would actually show.

Not until Tiger’s caddie, Joe LaCava arrived at Sedgefield on Sunday to scout the golf course did Brazil and his staff know for certain that they would soon be experiencing “Tiger Mania” for the first time.

“I’ve been doing this for about 15 years now, as tournament director and I thought I had a pretty good handle on what ‘Tiger-mania’ and the ‘Tiger effect’ might be. But it really blew me away,” said Brazil. “I was really proud of my staff and the committee for the way we got ready for it. I thought for the most part we were pretty flawless.”

As he does for every competitive round, Tiger arrived in Greensboro a man on a singular mission: to win. But this time, the stakes were different. This time it was win or go home. And the hundreds of thousands of golf fans who flocked to the Piedmont Triad during the week enthusiastically showed Tiger their appreciation.

“Electric out there from the very first hole,” Tiger said. “Really cool. The people out here are absolutely amazing. The whole city and the whole atmosphere … I hadn’t seen too many events like this where the excitement has been like this.”

Tiger told Sedgefield owner John McConnell — one of his partners during the Wednesday Pro-Am, along with Los Angeles Clippers superstar Chris Paul — that Sedgefield’s greens were the best he played all year. Even the tournament volunteers got into the spirit by dressing in “Tiger red” for Sunday’s final round.

“The people are just absolutely incredible,” Tiger said, after his final-round 70 left him four strokes behind Love and tied for 10th. “The support that they showed, to come out in droves like this and the humidity and rain, they were out here all week and it was very special playing in front of them.”

The overall economic impact of the Tiger Effect on the Triad and beyond was staggering. Once Woods committed to the event, organizers immediately printed 49,000 extra tickets. Brazil said that even in a huge year the tournament would typically have, at best, 90,000 people for the week. This year, he said they had 143,000 people come through the gates. Additional parking had to be arranged, more busses ordered, not to mention food and beverage, and merchandise.

The TV ratings were enormous, as well. The second-round telecast was the most-watched Friday on the Golf Channel since Woods’ last win at the 2013 WGC-Bridgestone Invitational. Ratings that day were up 234 percent from last year’s second round at the Wyndham.

The weekend was even better as Saturday’s 3.2 rating on CBS matched what the network drew during the third round of the year’s final major, the PGA Championship, while Sunday’s final round had a 3.9 rating — the best for a non-major on any network since NBC drew 5.7 in May 2013 for Woods’ win at The Players Championship. The rating was also the highest for a non-major on CBS since Woods’ win at the AT&T National in July 2012.

“With Tiger being in contention, it just changed everything,” Brazil said. “He was on top of the leaderboard Saturday morning. We had a market share of 10 on Saturday, which means that 10 percent of America is watching.

“That’s just that many more people seeing the Piedmont Triad, seeing the Wyndham Championship,” Brazil said. “That is a huge number and it is not just domestic numbers. It is around the world. I don’t know if we will ever do that again. I certainly hope so. But getting Tiger here was definitely the magic recipe.”

Brazil’s best educated guess is that after Tiger committed to play, the economic windfall to the Piedmont Triad, including concessions, ticket sales, clothing sales, parking, food and beverage — everything up 40 to 70 percent over 2014 — jumped from $30 million to $50 million or more.

That number includes people coming into the Triad — “heads in beds,” they call it — as well as the airlines, rental car companies, restaurants, and particularly the media exposure that comes to the region.

“Having Tiger here was phenomenal for not just the organizers, but for Piedmont Triad fans, and I thought Sedgefield showed beautifully,” Brazil said.

Tiger’s presence will particularly benefit the numerous local charities annually supported by the Wyndham Championship. Just one day after the 2015 tournament ended, Brazil said they had already made an initial gift of $100,000 for Birdies For Backpacks, and that he was very hopeful they would surpass $250,000 and hopefully get to $300,000.

“I think this year we will get close to the $2 million mark with overall charitable impact,” Brazil said.

How do you top that?

Next year, however, the Wyndham Championship could play a more prominent role in who will make the U.S. Ryder Cup team. The PGA of America tweaked the points system allowing golfers to continue accumulating points all the way up until The Barclays, one of the FedExCup playoff tournaments. In previous Ryder Cup years, points were awarded only up until the PGA Championship.

And if the success of 2015 is any indicator, next year’s field could be even better.

Before signing off for the year, Tiger was asked if he would come back to Greensboro. “I would love to,” he answered enthusiastically.

“The thing I am most excited about is that a lot of new people came out to this tournament, who had never been out to Sedgefield and the Wyndham Championship,” Brazil said. “They found out there is just so much for people to do out here. It is much more than just a golf tournament.”