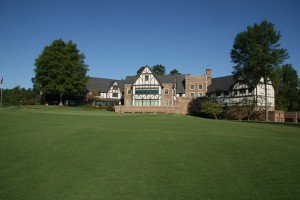 GREESNBORO, N.C. — There was a palpable buzz throughout the corridors of historic Sedgefield Country Club on Monday during the annual Media Day press conference for the 2011 Wyndham Championship, as 10th year tournament director Mark Brazil stepped to the podium and announced that the PGA TOUR and Wyndham Worldwide were extending their title sponsorship of the event for four years through 2016.

“It’s a win-win situation, and it’s great news for the region,” Brazil said. “It’s a way bigger deal in this economy. There’s no guarantees on these title sponsorships. It is hard for title sponsors to come out of pocket for a large amount of money for one event. But it’s working for Wyndham. They’re getting their key clients here, walking the course, seeing Wyndham Championship logos everywhere, having a good experience with all the executives.”
The 2011 Wyndham Championship will be contested August 15-21 at the Donald-Ross designed Sedgefield CC, where 10-time international winner Arjun Atwal is set to defend his maiden PGA TOUR title.

“I’m honored to come back,” said Atwal at Monday’s press conference. “It meant a lot to me to win here last year. It was nice to see the place again. It will be fun to come back. Right now, I’m just thinking about Akron (and the Bridgestone Invitational). But when I get back here in a couple of weeks I’ll be looking forward to the tournament. When you have these good memories of making putts and things like that, it helps you when you are out there. You automatically start feeling good about yourself.”

Along with his first PGA TOUR victory at Sedgefield, Atwal managed a lot of other “firsts” in 2010: First wire-to-wire winner in Greensboro since Jesper Parnevik in 1999. First Indian-born player to win on TOUR, and the first TOUR player to win both the qualifier and the tournament that follows since Fred Wadsworth at the 1986 Southern Open. His victory was yet another historical footnote in the annals of the Greater Greensboro Open — or the GGO — as the event was originally known and has been popularly called through the years.

Greensboro has been a regular and popular stop on the PGA TOUR since the tournament’s inception in 1938, and the tournament has stood as a proud part of the Gate City’s heritage for 70-plus years. It is the sixth-oldest tournament on the PGA Tour and has contributed through the years millions of dollars to area charities.

The 2011 championship has a $5.2 million purse set and had entered the final year of its contract with Wyndham.

Since the tournament returned to Sedgefield from Forest Oaks four years ago and Wyndham came aboard as a sponsor, the tournament has rapidly gained steady momentum. The Wyndham Championship is the final event of the PGA TOUR Regular Season and plays a pivotal role in the race to the PGA TOUR Playoffs for the FedExCup. The event offers the final opportunity for players to improve their seeding heading into the Playoffs, or in some instances, move into the top 125 to qualify for the first Playoff event, The Barclays.
“We are proud to extend our agreement with our wonderful partners at Wyndham Worldwide,” said Bobby Long, Piedmont Triad Charitable Foundation Board of Directors chairman. “On behalf of the entire region, we are very appreciative of Wyndham Worldwide’s continued support and the stability it provides our PGA TOUR event. We couldn’t ask for better partners in our quest to make the Wyndham Championship A++ in every way.”

Also on hand Monday were numerous representatives of Raleigh-based McConnell Golf, which purchased Sedgefield in February and is currently in the throes of numerous upgrades and restorations around the club.

Already at Sedgefield, McConnell Golf has begun its renovation work most noticeably with a new Wall of Champions overlooking the ninth green and featuring all the past Wyndham Championship winners, along with a freshly painted water tower, major tree work and landscaping around the clubhouse, an updated clubhouse interior, four new brick columns adorning the clubhouse entrance, extensive bunker work on No. 3 and rerouted cart paths and stone bridge renovation on Nos. 10 and 18.

Like everyone else around Sedgefield CC on Monday, McConnell Golf Founder and CEO John McConnell said he was thrilled with the Wyndham sponsorship extension announcement.

“I think it will certainly give the tournament a long-term strategy,” said McConnell. “You can make changes around the golf course, the clubhouse and it makes it easier to improve things. You don’t have to worry about being out of business or whatever in the next year or so. The commitment really gives you more security and a better chance to improve the tournament.”
Founded in 2003, McConnell Golf has been widely hailed throughout the golf world by promoting pure golf for the true golfer, delivering quality golf and top-shelf amenities to its members at strategically located courses throughout the Carolinas. “The Greensboro Triad area of North Carolina is a fertile market,” McConnell said “We can now deliver our multiple-club experience to golfers in this region.”

McConnell Golf offers its country club members an unusual deal: Those who pay an initiation fee at one course gain access to all seven. With full golfing privileges at all McConnell Golf properties, members enjoy the benefits of playing a selection of top-ranked courses all maintained to the same high standards associated with any McConnell Golf Club.

McConnell Golf’s attention to quality is also a chief reason why all five of the McConnell Golf-owned courses in North Carolina were ranked among the state’s prestigious Top 100 released in the April 2011 issue of Business North Carolina magazine. The company even allows outside play through its innovative “McConnell Golf Trail,” which offers its guests a rare opportunity to comfortably travel around the Carolinas and play a geographically well-positioned sampling of some of the most prestigious private golf courses in North and South Carolina.

Lucas Glover, the 2009 United States Open champion, appreciates first hand the quality of courses on the McConnell Golf Trail. As a McConnell Golf member, a native of Greenville, S.C., who grew up playing golf around the Carolinas, and a former All-American at Clemson University, Glover is well qualified to endorse McConnell Golf’s weeklong dream tour.

“These are some of the finest private courses in the Carolinas,” Glover said. “McConnell Golf understands that combining championship golf with excellent service results in an experience by which all others will be measured.”

“We are delighted to continue our relationship with Wyndham Worldwide, especially given the critical role the Wyndham Championship has played in the schedule as the final event in the PGA TOUR Regular Season,” said Tim Finchem, PGA TOUR commissioner. “Thanks to Wyndham Worldwide’s partnership, the Wyndham Championship has received tremendous support in the region, and our players have embraced the event, its leadership and the golf course at Sedgefield Country Club. These factors have all played a large impact on the increases in the tournament’s charitable giving since Wyndham signed on as title sponsor in 2007.”

In the five years since Wyndham Worldwide joined the Piedmont Triad’s PGA TOUR event, the Wyndham Championship has provided more than $1 million in charitable impact annually to organizations including the tournament’s official charity, Wishes By Wyndham. Other charitable organizations that have benefited from the Wyndham Championship include Victory Junction, The First Tee of the Triad, the Kevin Harvick Foundation, the American Junior Golf Association Ace Grant, the Crosby Scholars Community Partnership, Multiple Sclerosis of Central North Carolina and the Piedmont Triad Partnership, the organization that promotes central North Carolina regionalism.