GREENSBORO, N.C. — Webb Simpson is going to win on the PGA Tour.

Chances are, Webb Simpson is going to win many times on the PGA Tour.

I say this because the last thing anyone would want to do is put any extra pressure on Simpson as he enters today’s final round of the Wyndham Championship at Sedgefield Country Club with a two-shot lead over a host of pursuers including a couple of other sentimental faves: 2008 Wyndham champ Carl Pettersson, a Swede who as a youth moved to Greensboro, where he attended Grimsley High School, before making his name as a college player at N.C. State; former Golf Channel “Big Break” star Tommy “Two Gloves” Gainey; and a pair of good-natured South African former U.S. Open champs, Ernie Els and Retief Goosen.

Not to mention, Simpson has been close before. Were it not for a third-round 71 here last year, he might be playing today in defense of a Wyndham title. Just months ago, in early May, Simpson likely would have captured the New Orleans Zurich Classic had it not been for a stroke penalty incurred when his ball wiggled ever-so slightly on the 15th green, and Simpson eventually lost to Bubba Watson in a Monday playoff.

And hey, hasn’t tournament director Mark Brazil — who has watched Simpson since he was a kid playing AJGA events around the state — been telling anyone who would listen for weeks that Simpson was going to win this year’s Wyndham?

So, having said all that, it is important to note that if it doesn’t happen this afternoon at Sedgefield, it’s going to happen — probably sooner than later.

But there is no doubt that the most appropriate place for Simpson to win his first PGA TOUR event would be right here in Greensboro.

Not only was Simpson born and bred just over an hour drive east from here, in Raleigh, where he honed his game as a young man under the tutelage of Ted Kiegiel along the narrow, sculpted fairways of the Capital City’s venerable, inside-the-beltline enclave, Carolina Country Club, but Simpson’s father, Sam, is a well-known name in Triangle real estate circles and close personal friends with Wyndham Championship Tournament Chairman Bobby Long — and the Simpson family tree branches broadly throughout both the Triangle and Triad.

During his freshman and senior campaigns at Raleigh’s Broughton High School, Simpson led his team to the state high school 4-A championship. When it came time to pick a college, Simpson didn’t go far, leapfrogging UNC-CH, where his sisters went, and heading to Winston-Salem, where he put four years of his life and his collegiate golf career in the hands of Wake Forest head coach Jerry Haas, who helped steer his star recruit to ACC Freshman of the Year honors and later, when Simpson was a senior, first-team All-American selection.

Before he turned professional, Simpson — who Haas describes as a better person then he is a player — competed on the 2007 Walker Cup team that traveled across the pond to beat Great Britain and Ireland at Royal County Down in Northern Ireland.

To button up all the local ties,  in February 2010 Simpson married the former Dowd Keith, a Charlotte Latin grad and fellow Demon Deacon, who is now an actress — and the two have a 6-month-old son, James.

So yes, a victory for Webb Simpson this afternoon at Sedgefield would be wildly popular around the state.

Yet, the man himself — who sits 12th in the FedExCup standings and is the highest-ranked player in the Wyndham field without a 2011 PGA TOUR victory — swears he won’t be feeling the heat today.

“You know what, I honestly don’t put any pressure on myself,” said Simpson, who turned 26 two weeks ago. “I know the pressure will come, but I don’t add to the pressure. I am lucky to do what I do, play golf for a living. The way I look at it, if God wants me to win, then I will. If not, you know, I’ll have plenty more opportunities. But I’m just going to rely on my faith and if it’s my time, great, we’re going to go out there and win my 10 shots. If we come up short, then it’s just the way it’s going to happen.”

Following a pair of early bogeys and an hour-plus weather delay Saturday afternoon at Sedgefield, Simpson caught fire and grabbed the 54-hole lead with a birdie-birdie-eagle-birdie-birdie streak over Nos. 13-17 — narrowly missing a final birdie when his bending, downhill 18-footer on Sedgefield’s closing hole stayed just shy of the cup.

His 6-under-par stretch is tied for the second-best birdie-eagle streak of 2011, and Simpson’s round of 64 Saturday was one off his career low of 63 posted in the final round of the 2010 Wyndham Championship. “Probably one of my top birdie-eagle streaks that I’ve had, and it came at a better time than any other streak I’ve had, just because we’re not getting anything going all day and everybody else is taking it low,” Simpson said. “To finish the round that way was great. I’d much rather finish the round that way than start that way. If at all possible, we’ll start that way (Sunday).”

With a win today, the 54-hole leader Simpson would not only become the 12th first-time winner on the PGA TOUR in 2011, he also would move to No. 3 in the FedExCup standings. Players inside the FedExCup top five heading into the fourth and final playoff event control their own FedExCup destiny; any player inside the top five who wins the TOUR Championship by Coca-Cola will win the FedExCup and the $10 million first-place prize.

And what would Sunday’s final round be without a little ACC competition at Sedgefield, where the league was founded in 1953? Simpson is trying to become the seventh different winner of the Wyndham Championship from an ACC school — the last being N.C. State’s Pettersson in 2008.

“I don’t put any pressure on myself to be a superstar, anybody else,” Simpson said. “I look at it as more of this is what I do, how can I get better, how can I improve, what’s going to make me be out on Tour and be one of the best players in the world for 15 years? I kind of keep it day by day and, you know, the only thing I’m worried about right now is the first tee shot Sunday. That’s kind of the way I look at it.” 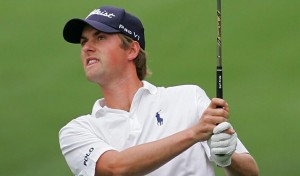