Twice saved from the wrecking ball by a coalition of preservationists, historic Wentworth by the Sea, a landmark hotel in New Castle, N. H. that reopened in 2003 after 21 years of closure, now reigns as the queen of the Granite State’s 18-mile seacoast.

After years of neglect, Wentworth by the Sea is grand once again

Built in 1874, the wooden-frame hotel, designed to resemble an ocean liner (its smokestack-like turrets have been converted to multi-level suites), crowns a bluff overlooking the mouth of the Piscataqua River, which flows between New Hampshire and Maine. A snug harbor and beyond it the sea are in view from most of the hotel’s 161 guest rooms. Dark woodwork, rich brocades and maritime art accent the beautifully restored Victorian-era edifice, now operated as a Marriott Hotel & Spa. Its location is ideal. Portsmouth, the nation’s third-oldest city (1623), is 10 minutes away, its lively brewpubs and fine seafood restaurants worth finding. Boston is within an hour’s drive. Arriving by yacht? A large, protected marina awaits. Autumn, when locals reclaim their turf, is the time to go.

After admiring the antique mural of winged seraphs on the dining room’s domed ceiling, ask the concierge to book a tee time on the otherwise-private Wentworth by the Sea Country Club. Founded in 1897, the current layout is a Yankee patchwork quilt of a course, its original nine by Donald Ross (1910) later expanded to 18 holes by Geoffrey Cornish. His protégé, Brian Silva, returned in the late 1990s to create a handful of new holes, phase out old ones and add a little length and coherence to a compact layout that plays nip and tuck with the sea.

At 6,306 yards (par 70), Wentworth appears tame on the card, but on a typically windy day, the test is firm. The narrow, moguled fairway at the first hole, a 573-yard par five, is a stormy sea of bentgrass that pitches and tosses through the woods. Flat lies are rare. So are flat putts–the greens are extensions of the fairways. The fourth hole, a standout, is a Cape-style par four that calls for a bold carry over the tidal flats of Witch Cove to a rumpled fairway that climbs into the forest before veering left and dropping to a pine-framed green set above the cove. Here the salty breeze is steady, yet exposed shelves of granite remind you where you are.

Wentworth’s back nine comes on strong. The par-five 11th, like the first, rambles down the spine of a humpbacked fairway, though holes 14 though 16 are the heart and soul of the state’s only seaside links. The 403-yard 14th bends gently to the right along the marsh, a lighthouse and ships’ masts in view to the east. At land’s end is the 195-yard 15th, its tee cantilevered onto sea-blackened rocks and its exposed target staked out by a lone wind-twisted pine. The 16th is a short but intriguing par five that calls for a brave tee shot over the rocky shore, with a long waste bunker indenting the entire right side of the hole. The hotel, atop its hill, commands the view across Little Harbor.

In Greenland 20 minutes from the hotel is Portsmouth Country Club, home to a vintage 1957 design by Robert Trent Jones that displays all the master’s features: Broad fairways, pedestal greens, heroic risk-reward options. With nearly half the holes strewn across Pierce’s Point, a lightly wooded peninsula that juts into Great Bay, this semi-private club boasts a stunning location. The breeze, invariably fresh at the far end of the course, adds piquancy to the strokes. 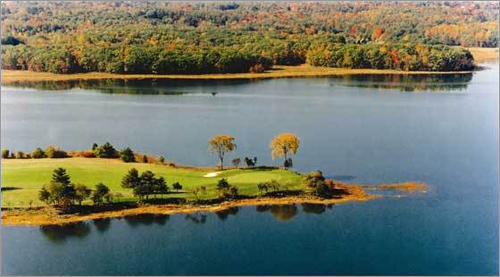 Ideal for walkers, the burly 7,072-yard layout unfolds on gently rolling land and soon departs a cluster of weeping willows for the fourth, a short par five that doglegs to the left around a tidal marsh, daring players to sip as much water as they can swallow on the drive. The tilted green, perched 30 feet above the fairway on a windswept hill, is hard to hit with a wedge, much less a fairway wood.

Portsmouth’s finest hole is the 12th, a 472-yard par four stretched along a neck of land to the limit of the point, a white-capped bay on the left and a calmer bay lapping the shore on the right. The small round green, defended by a solitary bunker and a pair of specimen trees, teeters above the salt marsh. On a clear day, peaks in the White Mountains can be sighted to the north.

After golf, set aside some time to explore the state’s tiny coast. Head south along Route 1A to Odiorne Point State Park, known for its tide pools and nature trails. If you’re blessed with an Indian summer day, go to Rye, where the beach is broad and sandy. For fried clams and a lobster roll served to a reggae beat, grab a picnic table at Petey’s Summertime Seafood and Bar in Rye. Finally, take a leisurely drive past Millionaire’s Row in North Hampton, its collection of summer “cottages” a legacy of the Gilded Age.