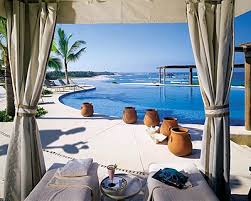 Poolside at the Four Seasons

The AARP is getting pretty hip in its old age.

The venerable association recently named Puerto Vallarta, Mexico as the No. 1 destination for American retirees. The decision factored in climate, the ex-pat community environment, cost of living, housing, health care, culture and leisure, plus ease of access to and from the U.S.

Located on the Pacific coast an hour’s flight west of Mexico City, Puerto Vallarta first came to light in 1963, when director John Huston arrived with a cast and crew (including Elizabeth Taylor and Richard Burton) to film Tennessee Williams’ The Night of the Iguana in what was then a sleepy colonial seaside village. Liz and Rich’s torrid off-screen affair during the making of the movie made international headlines, gaining instant fame for Puerto Vallarta.

Flash forward to the 1990’s. The mansions Taylor and Burton owned in an area known as “Gringo Gulch” had morphed into a b & b called Casa Kimberley. The Love Boat, sigh, had long since come and gone.

There was a time in the ‘80s when Puerto Vallarta was one of the fastest-growing seaside resorts in the hemisphere. Easy to see why. Tumbling down from wild mountains to the 25-mile-long crescent of Banderas Bay (Bahia de Banderas), Puerto Vallarta is a colorful town known for its cobblestone streets and Spanish Mission-style architecture. Its vibrant Malecon, a popular waterfront promenade, is perfect for a stroll. Lively seaside cafes serve fish tacos and cold beer on one side, with the second-largest bay in North America on the other. Ascend any of the hills rising from the city, and a panoramic view of the azure-blue sea and the steeple of the Church of Guadalupe is all yours.

And yet while it boasted an international airport, maintained 16,000 hotel rooms and welcomed more than three million visitors annually, many of them cruise ship passengers, Puerto Vallarta had no first-rate golf to offer at the approach of the millennium.

Enter Jack Nicklaus, the Golden Amigo. Thanks to a carte-blanche arrangement with the government, Nicklaus single-handedly catapulted Mexico into the golf vacation stratosphere with his prolific output. (His goal, according to insiders, is a total of 50 facilities south of the border, and he just may get there if the golf/travel sector stages a recovery).

In addition to his stellar designs built in the early 1990’s in Los Cabos at the tip of Baja California Sur, Jack later jumped at the chance to design a course for Four Seasons Hotels and Resorts, which was planning its first property in Latin America. Located 26 miles north of Puerto Vallarta on a slim peninsula wedged between the blue Pacific and the foothills of the Sierra Madre, the Four Seasons Resort Punta Mita, opened in 1999, quickly became one of Mexico’s most idyllic tropical hideaways.

For retirees who cashed out early, can speak a little Spanish and who like to match their handicaps on a regular basis, the high-toned resort community at Punta Mita, located near a laid-back beach town favored by surfers, is perfecto. The sunsets aren’t bad, either.

The setting for the resort community, with private and fractional residences available, is ideal. Scalloped strands of pulverized coral stretch away from the property’s low bluffs, the ocean’s flat horizon broken in places by piles of sea-blackened rocks offshore. Peeking through the palm fronds is a free-form, infinity-edge pool set well above the sea. To the south loom distant peaks in the Sierra Madre. A cool sea breeze keeps temperatures in the mid-70s in winter and the mid-80s in summer. (Puerto Vallarta is on the same longitude as Hawaii).

For golfers, it gets better. Two miles from the stylish hotel and community is the kind of world-class site that only the greatest player in the game’s history gets a chance to assess before ground is broken. With courses like Punta Mita (“Tip of the Arrow”) to his credit, Jack Nicklaus’ prowess as a designer now rivals his achievements as a player.

Routed in all directions across a narrow neck of land, with portions of five holes on (or in one case in) the Pacific and three holes skirting Banderas Bay, Punta Mita is a well-balanced, resort-friendly layout, its ebb and flow inspired by Pebble Beach and other great seaside designs. However, the beautifully groomed course has been somewhat eclipsed by its 19th hole. No, not the post-round watering hole, though it shares the same name: Tail of the Whale.

During course construction, Nicklaus and his design team noticed a squib of volcanic rock in the shape of a catcher’s mitt a little under 200 yards from shore. The island’s rear rock walls seemed to deflect salt spray kicked up by incoming waves. Which meant grass might survive out there. What if….

Without further ado, the decision was made to create hole 3-B, an optional par three, its target the only natural island green in the world, and certainly the only one in an ocean. The meek of heart can have a go at hole 3-A, an excellent land-bound one-shotter. Go-for-broke gamblers, on the other hand, can attempt to carry the ball at least 180 yards into the wind to find a generous-sized green that beckons incongruously from the sea. It’s a thrilling, do-or-die shot that most guests try no matter what. Sure-footed players can stroll the hand-laid stone walkway to the green at low tide to putt out, or simply drop a ball on terra firma once across.

When I played Punta Mita several years ago, it was high tide. “You want to swim, senor?” asked my caddie after I managed to land my tee shot on a tiny patch of fairway short of the green. He was kidding. Another caddie sat waiting behind the wheel of an amphibious vehicle. After puttering back to the mainland, I found the only problem with hole 3-B is coming back to earth to play the rest of the course.

Landscaped with thousands of palms and framed throughout by dune-like mounds and vast waste bunkers, Punta Mita, with five sets of tees ranging from 7,014 to 5,037 yards, is one of the most cleverly plotted resort spreads Nicklaus has ever built.

On most golf courses, par fours provide the sinew and challenge. Punta Mita has many fine par fours, notably the spectacular seaside 18th, but it’s the lengthy par threes that provide the muscle. Conversely, the layout’s five par fives are risk-reward teasers that average well under 500 yards from the blue tees at 6,261 yards. Also, forward tees put the longer holes well within reach of free-swinging holidaymakers. Many guests not only match their handicaps at Punta Mita, they shoot career low rounds. (When queried, most were mum on whether or not they included the Tail of the Whale in their tally).

The club’s practice facility, featuring a spacious tee, a tub-shaped hitting area, six target greens, and a stunning mountain backdrop, is one of Mexico’s finest. So is the golf shop. For those who managed to avoid the deleterious effects of the 2008 financial meltdown, I can’t think of a better place in Mexico to invest in a vacation residence, especially for active-minded retirees.

In addition to water sports at the resort’s beach (kayaks, sailboats and windsurfers are available) some of Mexico’s finest surfing beaches are located north and south of the resort community. Snorkeling or scuba diving excursions can be organized to the Marietas Islands Wildlife Preserve due west from Punta Mita, where the underwater visibility is excellent and the marine life abundant. Seasonal whale watching cruises are available from December to March. Deep-sea fishing, hot air balloon rides, horseback riding, all-terrain vehicle tours, and nature hikes round out the list of activities.

For golfers, there’s more. Nicklaus returned recently to create a second venue at Punta Mita. Named the Bahia Course, the resort’s new layout is entirely different from the original, now known as the Pacifico Course.

Like other designers, Nicklaus is aghast at the recent advances in golf equipment. Given the vast distances a fit player can launch today’s golf ball, a sphere that’s engineered to go far and straight with minimal spin, the green, logically, has become the last line of defense for architects. (Nicklaus strongly believes the game’s governing bodies have not properly regulated the balls and clubs with which the sport is played).

While the user-friendly Pacifico Course has wide landing areas and mostly large, flattish greens, the Bahia Course is marked by tighter fairways and smaller, more undulating greens. Many of these greens are defended by deep bunkers. With its more rigorous and exacting challenges, Bahia, opened in 2009, has a totally different look and feel than Pacifico. Handed prime oceanfront land not once but twice at Punta Mita, Nicklaus was careful not to repeat himself and put a few more teeth into his second design.

While it lacks the trans-ocean tee shot at Pacifico’s jaw-dropping island hole, the Bahia Course, stretching to 7,035 yards (par 72), does have five holes that skirt the Pacific plus an additional two holes with ocean views. Bahia’s most memorable hole is the short par-four 17th, which doglegs around a crescent-shaped cove and calls for a carry over rocks and sand to a green that appears to have more surf than grass in play.

Several of the interior holes on the Bahia Course wind around the beautifully landscaped resort community at the new St. Regis Punta Mita Resort, which is just as elegant as the Four Seasons property. With private butlers available, it’s perhaps a little more bespoke. The Starwood affiliated hotel says its “120 exquisitely appointed guest rooms and suites…offer a touch of rustic Provence combined with Mexican art and handcrafted furnishings,” but if it’s France you want, I suggest you head for the Mediterranean coastal region of Languedoc-Roussillon, AARP’s No. 2 ranked destination for American retirees.

But if Mexico, specifically the environs of Puerto Vallarta, is where you want to be in the sunset years, I can’t think of a more ideal community than Punta Mita. And if any of you card-carrying members of AARP want to go low on a consistent basis, play the white tees at Pacifico and stick with hole 3-A, the par three without the gaping open sea that tosses between tee and green.