Paging through The Economist last week, I learned that the beleaguered Greek government would miss its budget-deficit targets for this year and next. The country’s deepening recession is to blame. Predictably, euro-zone finance ministers responded by saying they would not hand over the latest tranche of bailout funding ($10.7 billion) to Greece until mid-November, a month later than expected. On cue, Greek unions staged another general strike to protest the latest austerity measures.

View from the Romanos at Costa Navarino

Given this sand-in-the-hourglass scenario, it was very surprising to find out that a new resort golf course opened in late September in the Greek region of Messinia, in the southwest Peloponnese. The area, considered one of the most beautiful seaside landscapes in the Mediterranean, has been shaped by 4,500 years of history. Maybe that puts the nation’s recent euro snafu in perspective. (Greece has been a member of the EU since 1981).

Known as the Bay Course and attached to a resort development called Costa Navarino, the new layout, designed by Robert Trent Jones Jr., joins the Dunes Course, a venue laid out by Bernard Langer in partnership with European Golf Design that opened last year.

Jones, who writes verse in his spare time, waxed poetic about his latest creation. 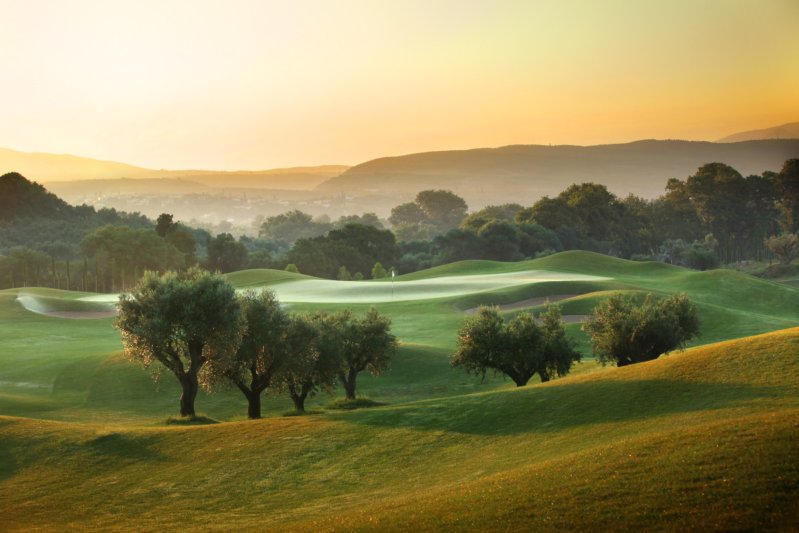 Costa Navarino is the new showpiece for golf in Greece

“At Costa Navarino, golfers can commune with the spirits of the ancient Greeks while pursuing the Royal and Ancient game,” he enthused. “Our new Bay Course is sculpted out of the earth and rock of Greek soil, much like the marble statues of the ancients.” He went on to say that the Bay Course, like Costa Navarino itself, is a sustainable facility that emphasizes and protects the natural environment. The building footprint for the resort development will be less than 10% of the total land area. For sophisticated travelers, the ultimate luxury is space. Unspoiled space.

Overlooking the historic bay of Navarino and the town of Pylos, the Bay Course was laid out to maximize the panoramic views of the surrounding mountains and the Ionian Sea. Jones placed two holes directly along the bay, notably the par-4 17th, a short, strategic gem that may soon takes its place among the finest risk-reward holes on the Continent. The layout’s diversity is evident as it moves inland, with holes flanked by box canyons and ancient olive groves. (Players can sample Kalamata olives from 500-year-old trees preserved during course construction). Extensive practice facilities and a golf instruction program are expected to be available soon.

Along with a balmy year-round climate, Costa Navarino currently offers a handful of luxurious hotels along with 36 holes of golf in this authentic, undiscovered corner of Greece. There’s The Romanos, a Luxury Collection Resort, and the Westin Resort, both five-star Starwood properties; as well as other facilities at Navarino Dunes. In future, the development will be home to Europe’s first all-pool-villa resort to be operated by Banyan Tree, one of the hospitality industry’s leading global brands. Luxury residences, conference facilities, and spa and thalassotherapy centers are also in the works.

Now if only the resort’s far-sighted developers can help to sort things out in Athens.