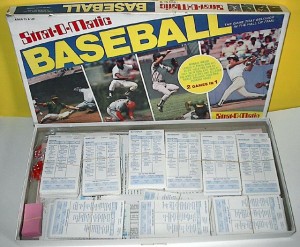 It’s funny how the baseball post-season reveals how little that fans and media know about baseball. I’m not talking about casual observers. I mean fans and media people who follow the game closely enough to know all about subtleties like a pitcher mixing his pitches, a batter working the count, a fielder adjusting his positioning.

What they don’t appreciate is to what degree randomness is inherent in the game. So while they appreciate the details of the game, they miss the role that chance plays in determining the outcome of games. So maybe it’s not baseball they don’t understand, it’s the laws of probability. It often leads to flawed analysis, or analysis that is spouted with a degree of certainty that doesn’t really exist.

A batter comes up with the bases loaded in the ninth inning and hits a hard ground ball up the middle to drive in two runs and win the game. He is a hero. If he had hit the ball five feet to the left, the shortstop would have fielded the ball and turned a double play. The batter would have been a bum. And yet, it’s impossible for a batter to purposely hit the ball a difference of five feet one direction or another.

Most people are aware of all of this in some part of their minds. But the feeling seems to be that, on a team level, the breaks even out over the course of a game. If a manager or player laments that several line drives were caught, it is seen as making excuses. As far as bunching hits rather than spacing them, or hitting home runs with men on base, that is often ascribed to the (perceived as) vastly important quality of “clutchness” rather than randomness.

But the breaks don’t always even out in a game. That, along with the variances of pitcher match-ups and the length of the schedule, largely accounts for the fact that in baseball the vast majority of teams have a winning percentage in the fairly narrow band of .600 to .400.

It also means that when two teams meet in the playoffs, it’s hard to legitimately give one team a better than 60 percent chance of winning a given game. But let’s say that you think one team is a really strong favorite, and would win two out of three games against the other (it’s hard to go any higher than that, given that both teams were good enough make the playoffs).

In such a case, the superior team is a lock in a seven-game series, right? No. If you give the weaker team a 33.3 percent chance of winning each game, the laws of probability say that it will win a seven-game series about one out of five times. Given a more realistic 55-45 split in the probable outcome of each game, the weaker team will win about two out of five series. (From Leonard Mlodinow’s book The Drunkard’s Walk: How Randomness Rules Our Lives.)

This is why the pundits and fans who gave the San Francisco Giants no chance against Phildelphia because the Phillies had a better player at nearly every position, to go along with three great starting pitchers, were so wrong. It’s also why the team with the best regular-season record has won the World Series only three times in the sixteen years since baseball expanded its post-season to three rounds (counting this year, with the Phillies already out).

The good news in this is that it gives fans of all teams hope. You may be going up against the big bad New York Yankees (or whatever other big bad teams there are in a given season), but you’ve still got a shot. And there are only five teams that haven’t made the playoffs in the last decade.

The bad news—if you want the best team to be crowned as champion—is that in the scenario where one team has a 55-45 edge, you would have to play a 269-game series to play a “statistically significant” series where the weaker team had a less than five percent chance of taking the title.

Of course, most people take the post-season results as more definitive than that. The same goes for individual stats.

Let’s say that we played a seven-game series between the Giants and Phillies or the Yankees and Texas Rangers in Strat-O-Matic baseball ( I was an APBA kid myself) or we did a computer simulation based on player statistics. Anyone who has played these simulated games knows that it’s likely there will be players who go 2-for-20 in a series and probably someone who hits three home runs or drives in a lot of runs. We also know that it’s not because the dice or the computer electrons came through in the clutch or choked. It’s the same thing if we take six random games (that’s how long each series lasted) from those four teams’ 162-game schedules and compiled those statistics.

But since it happened in real life, on the big stage of post-season baseball, players are labeled as chokers or clutch players—for the most part with no ifs, ands, or buts attached.

Now, it’s entirely possible that some players do react better under the pressure of the post-season than others. But here’s the point: It’s impossible to separate that out from randomness in the small sample size of a seven-game series.

In New York, Nick Swisher is getting an earful about his second straight terrible post-season. In Philadelphia, Ryan Howard is catching the wrath of the fans for an RBI-less post-season. In San Francisco, of course, Cody Ross is being given the key to the city.

It’s actually a little baffling that Howard is taking the most heat from the Philadelphia fans (I’m basing this on the philly.com message boards in the wake of the sixth game). Yes, he took a called third strike for the final out and struck out 12 times in the series. But in his previous at-bat he hit a deep double with Jimmy Rollins on first base that didn’t result in a go-ahead run only because centerfielder Andres Torres got a favorable carom off the wall and played it well. In the fourth game, which the Phillies eventually lost, he scored the tying run after a double off left-handed reliever Javier Lopez in the eighth inning.

For the series, Howard hit .318/.400/.500 (avg./OBP/slugging) against the Giants while Chase Utley hit .182/.333/.227 and didn’t get a single hit off a left-handed reliever. But Howard ended up being the bum—maybe because he signed a huge contract this year, or maybe because he’s been the key RBI guy in the past.

Back in New York, Alex Rodriguez was of course the whipping boy for his post-season performances—and some of them were so bad he probably deserved it—until last year when—same guy—he carried the Yankees through most of the playoffs.

Now they’re down on A-Rod again. I heard a sports talk guy practically screaming about how A-Rod had a hard time with Colby Lewis 92-93 mph fastball, and what a bad sign that was for the future. OK, Rodriguez’s production over the length of his contract is a question. But as far as handling Lewis, in three at-bats in Game 6 he hit a sharp line drive to the shortstop, a double to deep left center, and a line drive that was caught in left center. (He struck out looking for the final out of the series against reliever Naftali Feliz, giving this series symmetry with Phillies’ slugger Howard doing the same in the National League.)

This same sports talk guy went on to emphatically state—again and again—that pitching wasn’t the Yankees’ biggest problem but that the Texas series showed that hitting was actually their biggest need and should be their No. 1 priority in the offseason. Well, it’s always nice to get more offense, and it’s nice to be the Yankees and not have to prioritize as much as other teams. But we’re talking about a team that led the major leagues in runs scored over the course of 162 games. Isn’t that more indicative of the 2010 Yankees’ hitting prowess than being held to 3.2 runs per game in six particular games, important as those games might have been?

We live in an era of nearly endless media analysis on television, radio, and the Internet, and the opportunity for fans to spout off on Internet comment boards. In such forums, conviction and certitude rule. It seems wishy-washy to shrug your shoulders and say, well, this series could easily have gone the other way or Nick Swisher is a good player who happened to hit a dry spell at the wrong time. But it happens to be true. And it happens that there is less certainty in baseball than any other sport.