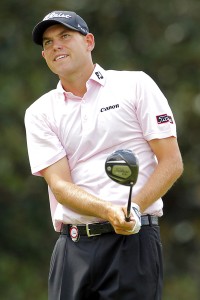 OK, so the FedExCup didn’t decide the Player of the Year race after all. How about the Fall Series? Can we make all of the POY contenders play in the portion of the season that is supposed to be an afterthought? Does Tiger Woods have a chance (just kidding)?

Actually, the playoffs did narrow down the POY field, though they didn’t give us a clear-cut, unflawed choice. For my own pick, it’s down to two players right now, Luke Donald and Webb Simpson. Others might have Keegan Bradley in the mix, but I don’t see anybody else with any sort of case, barring further developments in the Fall Series.

(I’m talking about PGA Tour Player of the Year here. World Player of the Year is a different story, with Donald more of a clear leader at this point but Rory McIlroy and Charl Schwartzel possibly entering the picture with a big European Tour finish. As for the Fall Series, it could affect the PGA Tour POY race. A win for Simpson, Bradley, or Donald—though I don’t expect Donald to play in any fall events—would lock it up, and a third win for Nick Watney, Steve Stricker, or Bubba Watson—but not Mark Wilson—would get them in the picture.)

How you feel about Donald as PGA Tour Player of the Year depends on if you give him some extra credit for winning the European PGA Championship. If you do, he’s definitely the pick. If you don’t, he’s still got a good case with only one victory (only because nobody had more than two wins).

There hasn’t been a one-victory Player of the Year since Orville Moody was the PGA Player of the Year in 1969. That was a very strange choice, but then the PGA was full of strange choices in the 1960s, including the nearly incomprehensible fact that Jack Nicklaus was ineligible for the honor in his first five years on Tour because he wasn’t a full PGA member (he was eligible in 1969, but slumped to three wins and no majors that year). So, let’s say that there really has never been a legitimate one-victory Player of the Year. Not even Ben Hogan, who got the PGA award in 1950 when it was voted on by writers for winning the U.S. Open in his comeback from an automobile accident in a year when Sam Snead won 11 times.*

*Someone wrote a very good book about the 1950 U.S. Open called Miracle at Merion.

The only one-victory money leaders have been Julius Boros in 1955 and Tom Kite in 1981. (Donald might not end up leading because Simpson is only about $69,000 behind). Boros led because the World Championship of Golf prize money dwarfed that of any other tournament in the 1950s, but Kite’s year is similar to Donald’s. Kite had 21 top-10s in 26 starts; Donald had 13 top-10s in 18 PGA Tour starts this year, and eight top-four finishes. His adjusted scoring average of 68.86 is nearly a half-stroke better than No. 2 Simpson’s (69.34)—and that doesn’t even include the WGC-Accenture Match Play, which Donald won.

Week in and week out, there’s no question Donald was the best golfer. Given the lack of a true standout this year, that makes him my POY choice.

That said, I’m actually souring a bit on Donald. I’ve been a defender of his relatively low win total, pointing out that short hitting, consistent players often have trouble piling up big victory totals because they have a good chance of being beaten out in any given tournament by a more inconsistent player having a hot week (whereas they have a better chance in match play because they only have to beat one player at a time). The overall point is still true, but, Donald does seem to shoot himself in the foot more than you would expect from such a consistent player.

He would be a clear POY choice if he’d been able to make the Heritage a second victory, but he lost there with a bogey on the third playoff hole (though it’s mostly forgotten that both he and Brandt Snedeker birdied the first extra hole). During the FedExCup playoffs, he charged into the lead thanks to a 30 on the front nine of the final round of the Deutsche Bank Classic—and promptly lost it with a double bogey on the 12th hole. Conversely, he blew his chance at the Tour Championship by playing the first 12 holes of the final round in 2-over so that going 3-under the rest of the way left him one stroke out of a playoff. At the BMW, he played great in the last three rounds, but had no real chance because of an opening 75.

Oh, well, perhaps it’s appropriate—both for Donald and for the year—that he made his POY case down the stretch by finishing third, fourth, and third in his last three tournaments. Kite did eventually start winning with more frequency as his career went on. Maybe Donald will do the same.

I wouldn’t have a big disagreement with Simpson getting POY honors. I cast aspersions on the PGA of America’s choices in the 1960s, but they have gone to a point system that I think weights things pretty well. You get 30 points for a major championship win, 20 for winning the Players Championship, and 10 for other PGA golf tournament wins. For the money list and scoring average, points are distributed to the top 10 on a 20, 18, 16, etc. basis. (The only change I might make would be to make WGC and FedExCup playoff wins worth 15 points each.) Simpson leads Donald in PGA POY points 56-50, not just because of his two-to-one win advantage but also because he’s second in money and scoring.

But probably more significant than the PGA of America award is the PGA Tour Player of the Year Award, which was instituted in 1990 and is determined by a player vote. If past history is a guide, the number of victories is generally the most important factor in that vote, but this year’s results are unpredictable.

The other big award is the Golf Writers Association of America’s. While it’s an America-based award, the writers are likely to take international results into consideration as they did last year when Graeme McDowell won and Martin Kaymer was second.

Now some thoughts on an eventful and exciting weekend:

• While I understand the objections of those who find the FedExCup points confusing and complain that the Cup and Tour Championship can be won by different players, I actually like the ebb and flow of the projected points. My only complaint as it relates to television coverage is that too much emphasis is placed on projected points early in the tournament, when they don’t really mean so much, but NBC doesn’t do a good job of clarifying things down the stretch. We had a Steve Sands whiteboard session with some time left in the telecast that clearly laid out the scenario of Luke Donald claiming the FedExCup with a solo third if Bill Haas won. For the rest of the telecast, the announcers were fixated on this scenario, while sketchy and scattershot on others.

Sands had briefly mentioned that Donald would also take the cup with a three-way tie for second and a Haas win. Such a scenario presented itself with the last twosome on the 18th tee. By then, Donald couldn’t claim solo third because he had been tied by K.J. Choi, but he could claim a three-way tie for second if Hunter Mahan and Aaron Baddeley, playing in the last group, both bogeyed 18. This was never mentioned. NBC somewhat belatedly brought Simpson back into the picture, noting only as Baddeley reached his birdie putt on 18 to make a playoff that a Baddeley win would give Simpson the cup. And I don’t remember them clearly stating as they came down the stretch in regulation that a Mahan victory would give him the cup and eliminate everyone else. There’s no reason that lead announcer Dan Hicks couldn’t have said either just before or just after the final twosome teed off on 18 that Haas, Mahan, Baddeley, and Simpson were still alive for the FedExCup, and told us what needed to happen for each to win.

• Haas walked away with the $10 million bonus, but it’s hard to say whether he enhanced or hurt his reputation for playing under pressure. His bad finish to the third round and blowing the lead with bogeys on 16 and 18 in the final round didn’t look good, and his way-right 4-iron tee shots on 18 in both regulation and the playoff looked downright ugly. On the other hand, his up-and-downs with the tournament on the line were steely. If he has an issue, it may be more with his swing than his nerves. Lost in the shuffle is the fact that he shot a very good final-round 68. Not lost in the shuffle is his par-saving shot from the water hazard on the second playoff hole. It’s not hyperbole to call it one of the most memorable shots in the history of the game. The shot was easier than it looked, as Johnny Miller said, but hitting it that close to the hole in that situation was extraordinary. Here’s another thing I liked about it: Haas left his shoe on when he put his foot in the water (granted, he might have done so because the water was so shallow it didn’t cover the top of his shoe). I’ve never really understood what’s so bad about walking around with a wet shoe and sock that players have to take them off to play a water shot.

• Haas was in three playoffs this year, going 1-2. If he’d gone 2-1 instead, he would be in the Player of the Year conversation. Then again, Simpson would have three victories if not for having his ball move after address in New Orleans, and he’d be the clear POY.

• The Solheim Cup showed again how exciting team match play competition can be when the competition is close, and how the emotion can seemingly spur players to great things (take a bow, Suzann Pettersen, for making birdies on the last three holes to win her key match against Michelle Wie). But proponents of more match play—including those calling for it to be used in the Tour Championship—should concede that while it’s exciting for a team event with 12 matches going on, it’s usually pretty dull in the finals of an individual tournament.

• Asia is clearly ahead of the U.S. and Europe in women’s golf right now, but that doesn’t mean it needs to be added to the mix in the same event. Having three teams in some sort of round-robin tournament might not produce the same drama. My solution would be to have the Solheim Cup winner play Asia the next year in a Presidents Cup type of event. Or, maybe even better because it would include the rest of the world, have a Western Hemisphere vs. Eastern Hemisphere (which would combine Asia and Australia) match in alternate years.

• I don’t agree with those who say it would have been a sporting gesture for Europe to agree to halve the match when Cristie Kerr of the U.S. couldn’t play due to injury. The Solheim Cup rules, agreed to in advance by all parties, call for a forfeited match, so that’s what it had to be. But I do think the rule should be changed to the Ryder Cup rule where the injured player gets a half against a player from the other side whose name is put in an envelope to cover such a circumstance. Granted, there is the danger of grumbling from the other team when a player who might have been capable of playing through an injury is withdrawn. Still, that seems more fair than having to give up a point.