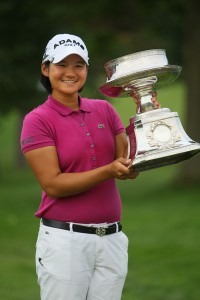 So much for the rather short era of the LPGA Tour not having a dominant player. Yani Tseng is it.

Tseng did win two majors last year, earning Player of the Year honors, so she was close. But she won only three tournaments in all, leaving her short of Annika Sorenstam-Lorena Ochoa territory.

On Sunday, Taiwain’s Tseng blew away the field to win the Wegmans LPGA Championship by 10 strokes. It was her fourth career major title, and in the last three majors she’s gone first, second (losing the 54-hole lead), first. A victory in the U.S. Women’s Open next week would give her the career grand slam—and she’s only 22 years old.

The 2011 parallels with Rory McIlroy are striking. Both blew the lead in the year’s first major and then won the second by a wide margin. And both are 22. But Tseng is way ahead of Rory overall with eight career LPGA Tour victories and four majors.

Tseng now has three wins halfway through the LPGA Tour season, so she has a chance to get into the five-plus range in official victories this year. As a bonus, she also claimed three early-season international wins. She has become the favorite every time she tees it up.

This is probably good news for an LPGA Tour that is trying to gain traction. It would be great news if the dominant player were a photogenic American like Paula Creamer or Michelle Wie (who would have thought she would emerge from her attention-getting teen years as a fairly boring—so far—good-but-not-great player).

Still, if a player becomes super-dominant, that becomes a story in and of itself. Tseng can only get there by winning about eight times a year or stringing together more majors. At least she does have some personality and has made a strong effort to speak English as much as possible. And she has a knack for playing her best in the big events. Tseng already has won twice as many majors as Ochoa (two) and more than Nancy Lopez (three, but she had a disadvantage because there were only two majors early in her career). And she’s way ahead of Sorenstam in terms of development; Annika didn’t win her first major until she was 24.

On the PGA Tour this week, we had 19-year-old amateur Patrick Cantlay shoot a 60 in the second round to take the lead at the Travelers Championship but fade to a tie for 24th on the weekend. So, Scott Verplank (1985) and Phil Mickelson (1991) remain the only amateurs to win on the PGA Tour since the 1950s.

Actually, the amazing thing is that any amateurs have won at all. Even the best of amateurs get to play only a handful of times on the Tour before they turn pro. That’s not many chances, and, of course, their games and mental toughness aren’t fully developed yet. Tiger Woods didn’t win as an amateur; he didn’t even come close.

It may be decades before another amateur wins. But since Cantlay has said he will remain an amateur through his college career, and he just finished his freshman year at UCLA, I guess you would say he’s got a better chance than most. He’s certainly off to a good start with top-25 finishes in his first two PGA Tour events, including a T21 in the U.S. Open. He appears to have a sound overall game and an exceptionally calm demeanor.

Cantlay’s 60 is a record for an amateur on the PGA Tour that is likely to hold up for decades. It came in the second round of a 36-hole day for him, since he never made it onto the course on a rain-delayed Thursday. After putting fairly poorly in the morning, he said he adjusted to the speed of the greens in the second round. Did he ever. Here’s how he accomplished his 60, which included an approach on the 18th that he nearly holed for an eagle that would have given him a 59.

There’s one oddity in this round that wasn’t addressed in his post-round press conference. On the seventh hole, he had a 20-foot first putt and a 16-foot second putt—and the diagram shows that the first putt ended up almost sideways in relation to the hole. So, he must have had the ball carried away from the hole by a slope—or else there was a glitch in ShotLink. Anyway, he made that second putt. He also made a 23-footer for par on the 10th hole, where he drove into trouble and had to pitch out. Those were key pars.

Numbers in parentheses represent yards from the hole: