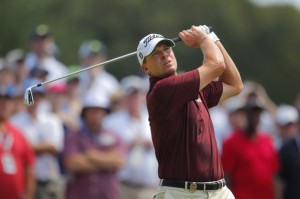 Can Steve Stricker--or anyone else--do what Jim Furyk did last year and claim Player of the Year at the wire? Photo copyright Icon SMI.

As we head into the last two events of the PGA Tour’s FedExCup, we are exactly where we were in 2010 regarding the Player of the Year race—nowhere.

Once again, no player has won more than twice on the PGA Tour and the winners of major championships haven’t put together outstanding overall seasons, leaving the picture muddled. At the moment, just like in 2010, nobody really deserves the PGA Tour Player of the Year Award.

Last year, Jim Furyk came to the rescue by winning the Tour Championship, not just clinching the FedExCup but also making it his third victory—and thus a worthy Player of the Year.

We might not be so lucky this time. Unless one of the players below wins in the last two weeks, there won’t be any really good candidates for PGA Tour Player of the Year, leaving “Position Vacant” as the best option, if it were an option. (World Player of the Year is a somewhat different story, discussed below).

Here are the players who could pretty much lock up Player of the Year with a win in the last two weeks (unless the other remaining event is won by a different man on this list, in which case it would be between the two of them):

Webb Simpson: Heads the six two-victory players at this point as he in No. 1 on the money list, is third in scoring average, and has a pair of runner-ups—one of which he lost in a playoff after calling a penalty on himself on the back nine of the final round when his ball moved at address on a short putt.

Luke Donald: A win would only be his second, but would propel him to the top of the money list to combine with his lead in scoring average. No majors, but both wins would be big (WGC and playoffs). He would have three big wins world-wide, including the European PGA Championship, though that doesn’t count for the PGA Tour race.

Keegan Bradley: If things stay as they are, some are proposing Bradley as Player of the Year based on his being the only one of the two-win players with a major. I’m not buying that—he ranks 33rd in scoring average and has missed 10 cuts. However, a playoff victory to go with a major and a regular win would be enough to overcome those objections.

Steve Stricker: A third win would do for him exactly what it did for Furyk last year—give a 40-something player his moment in the sun after a good but overshadowed career.

Nick Watney: Didn’t do much in the majors, but a third win would make it a strong campaign with a WGC title, another win on a strong course (Aronimink), a playoff win, and probably the money and FedExCup titles.

Bubba Watson: It’s been an erratic campaign, with a donut hole in the middle, but still probably (barely) good enough that if he’s the only one with three wins he’ll probably be Player of the Year.

Charl Schwartzel: Posting the lowest cumulative score in the four majors is a mere curiosity, since he didn’t seriously contend except for winning the Masters. But if he were to win a FedExCup title to go along with a green jacket, his overall major showing would be a boost to an already strong case if nobody wins more than twice.

Dustin Johnson: If he wins two playoff events and the FedExCup title, he could move to the head of the two-victory class though it wouldn’t be a slam dunk.

If none of the above players wins either the BMW Championship or Tour Championship it becomes so wide open that the following players could become legitimate Player of the Year candidates with a win in one of those two events (particularly if it’s the Tour Championship to give them the FedExCup):

Mark Wilson: Not a lock even if he were to become the only three-time winner, because he didn’t stay quite strong enough throughout the season, but he would have a chance if things fell right.

K.J. Choi: Sure, he’s not even close to the conversation now. But if nobody else does anything, a Players Championship-FedExCup combo would look pretty good.

Adam Scott: A playoff victory to go with a WGC title would complete a strong late-season run.

Jason Day: Could someone be Player of the Year with one victory? Maybe Donald, but Day could have a case if he claims the FedExCup by winning the Tour Championship to go with a pair of major runner-ups and 10 or 11 top-10s.

Phil Mickelson: OK, the chances aren’t too good. But Lefty could conceivably sneak away with his first ever Player of the Year honors if he gets a second and a first (preferably in that order) and nobody listed above wins. But realistically he needs to win twice.

For international Player of the Year, Donald currently has his nose in front, with a chance to lead the money list on both the PGA and European Tours (currently second and first, respectively). Rory McIlroy—who we haven’t mentioned yet because he’s not a PGA Tour member and not playing in the FedExCup—has a chance because of his dominating U.S. Open win but that’s his only victory so he needs another.

With some significant European Tour events coming up, there’s a chance for further developments on the international front. Last year, Martin Kaymer made a strong case for world Player of the Year by adding a couple of European victories to his PGA Championship. But U.S. Open champ Graeme McDowell took it away from him with his Ryder Cup heroics, a European win, and a victory in Tiger Woods’ event (my own choice was still Kaymer).

What I’d like to see: Somebody grab control of the 2011 PGA Tour by winning the last two FedExCup events—unless it’s somebody who hasn’t won yet and would muddle things even further. And Donald or McIlroy to win the European Tour’s Race to Dubai for a clear-cut international top dog.