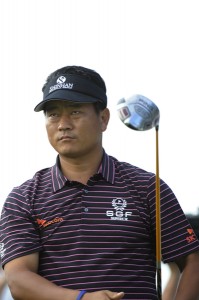 Winning the Players Championship has been more of a curse than a boon for players’ fortunes in recent years. So, while winning the Players in a playoff over David Toms was the crowning achievement of K.J. Choi’s career, let’s hope it’s not the last we see of him in the winner’s circle.

Choi has a couple of things in common with the last three Players champions: He was born outside the United States and he’s never won a major championship. But he doesn’t want to follow in the footsteps of another similarity shared by winners Sweden’s Henrik Stenson, Spain’s Sergio Garcia, and South Africa’s Tim Clark—none has won since.

It’s not just the lack of victories that’s sobering, it’s the depths to which this trio—and most other Players Champions of the past decade—have sunk. Here’s a rundown:

Tim Clark (2010): Has missed virtually the entire year with an elbow injury in 2011. He tried to play at the Players, but withdrew after the first round.

Phil Mickelson (2007): Has won eight times, including one major, since capturing the Players, but has endured his share of hardships as well—the cancer bouts of his wife and mother and his own diagnosis in 2010 of psoriatic arthritis.

Stephen Ames (2006): Won the Players at the age of 41, has managed a couple of low-profile October victories since but no other wins.

Fred Funk (2005): Won the Players at the age of 48, added an unexpected secondary-event PGA Tour victory at Mayakoba at 50, and has six wins on the Champions Tour. The downside: had knee replacement surgery in November 2009.

Adam Scott (2004): Has five more wins after claiming the Players at the tender age of 23, but more was expected. Has yet to win a major and endured a bad slump in 2009 when he failed to crack the top 100 on the money list.

Davis Love III (2003): Not really jinxed by winning his second Players, as he’s won four times since. But considering that he was 38 and close to the prime of an outstanding career, it’s been mildly disappointing. On the injury front, he’s been bothered by back problems and he tore an ankle ligament in 2007.

Craig Perks (2002): We didn’t expect much out of Perks when he came out of nowhere to win the Players. But making 1 out of 33 cuts in 2006 and 2007, his last two years on Tour, represents falling off the face of the earth, at least as a player. He was on site at this year’s Players as one of the announcers on the PGA Tour’s streaming video coverage, and he’s pretty good in that role.

Tiger Woods (2001): He did just fine for eight-and-a-half years after claiming his only Players title. But the year-and-a-half since then has been a different story. Has withdrawn from the Players with injuries the last two years.

David Duval (1999): Win at the Players was the seventh in a 14-month span, and he added an eighth the next week in Atlanta to further establish himself as the Tour’s dominant player at the time, even with the presence of Woods. Has won only twice since (one of them his only major at the 2001 British Open) and had his game abandon him to such an extent that he finished outside the top 170 on the money list every year from 2003 through 2008.

Another note on recent winners of the Players is that not only the last four, but seven of the last 10 are international players (also including Trinidad & Tobago native/Canada resident Ames, Australia’s Scott, and New Zealand’s Perks). The fact that the PGA Tour’s flagship event has been going to foreign player on a regular basis speaks to the growing international nature of the game.

But Players winners have also been less accomplished than in the past. From 1993 through 2003, 9 of the 11 Players champions were previous major winners. Since 2004, only 1 of 8 has been. Nor have any of other seven won one since.

The paucity of majors for recent Players winners has something to do with the fact that Woods has hogged so many majors in that span, while not managing to win the Players in the last 10 years. But going forward, what are the prospects of Scott, Funk, Ames, Stenson, Garcia, Clark, or Choi following up their Players titles with a major? Funk and Ames can be discounted due to age. Scott, Garcia, and to a lesser extent Stenson have the talent to do it, but they are still question marks. Clark and Choi are steady players who have each contended in a couple of majors, but you would have to say the odds are against them.

Choi will no doubt keep grinding. But he turns 41 this week, not the best time of life to reverse the trend and make the Players title a positive turning point.