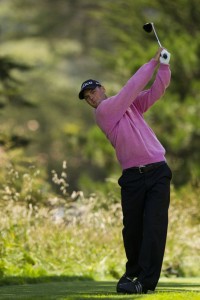 Martin Kaymer is officially No. 2, but he may be the best in the world right now. Copyright USGA/Mike Ehrmann

Two things we learned on the weekend: Martin Kaymer is probably the best player in the world right now and PGA Tour rookie Jhonattan Vegas has a great game to go with his great name.

The strongest field of the week was assembled by the European Tour’s Abu Dhabi HSBC Championship, and Kaymer blew it away for an eight-stroke victory. This was a field with four of the top five in the world (including a moonlighting Phil Mickelson) and also 12 of the top 25. On the PGA Tour, the Bob Hope Classic drew only one of the top 25 (Matt Kuchar, 13th).

Kaymer turned it into a one-man show with rounds of 67-65-66-66 to leave Rory McIlroy, Graeme McDowell, and Retief Goosen in the dust. Kaymer carried a five-stroke lead into the final round, and he ended the hopes of his distant pursuers by not making a single bogey on Sunday. He didn’t make a bogey on Saturday either. Or Friday. In fact, the German made only one bogey all week, on his 12th hole of the first round.

There truly are no gaps in Kaymer’s game, as I pointed out in this 2011 player preview. And this is now his fourth victory since last August. He followed his major breakthrough at the PGA Championship with wins in his next two European Tour events—and now with another in his first 2010 start.

Kaymer didn’t get as much respect as he deserved in the 2010 Player of the Year awards. He shared the European Tour’s award (voted on by a media panel) with U.S. Open champion Graeme McDowell, though Kaymer led the Order of Merit and won four tournaments to three for McDowell. McDowell’s Ryder Cup heroics were undoubtedly what evened the score, but I’m not sure how McDowell could have beaten out Kaymer on anybody’s ballot. And in what was essentially a vote for international Player of the Year, McDowell topped Kaymer for the Golf Writers Association of America award, an outcome that may have been influenced by McDowell winning Tiger Woods’ unofficial event just before the vote or by McDowell being a member of the PGA Tour.

Nor has Kaymer moved past Westwood for No. 1 in the world, though Kaymer has won four times since Westwood’s last official victory. Kaymer did move past Tiger Woods into the No. 2 spot this week. That’s No. 2 with a bullet.

Back in the U.S., the Hope might have drawn the short end of the stick in terms of field strength, but it produced a lot more drama and a potential future star when Vegas won a three-way playoff by making a 13-foot putt for a par after hitting his tee shot in the water on the second extra hole.

Although he drove into trouble in the playoff, Vegas put himself in position to win with a driving performance that was truly extraordinary over the course of the first three rounds. The 6-foot-2, 230-pound Vegas is one of the longest hitters in the game, ranking third on the Nationwide Tour last year with an average of 312.9 yards and third at the Hope with 308.7 yards. It’s nearly impossible to combine that kind of length with pinpoint accuracy. But Vegas didn’t miss a single fairway in the first round, missed only two in the second round, and didn’t miss any in the third round. At that point, he was an extraordinary 39-for-41 at finding the fairway with his 300-yard blasts.

It didn’t figure to last. After all, Vegas was 115th in driving accuracy on the Nationwide Tour last year. He went 6-for-14 at hitting fairways in the fourth round and 6-for-13 in the final round, still ranking 13th on the week in hitting fairways, heady territory for a bomber.

He did pay for a drive into a bunker on the 72nd hole, where he made a bogey to drop into a playoff. But he showed resilience with a birdie on the 18th hole to match Woodland on the first hole of sudden death, and then the winning par on the second hole as he scored a victory in only his second tournament as a PGA Tour member.

Vegas has an interesting past, as he grew up in Venezuela before coming to the United States to play golf college golf—he didn’t speak English at all and had to learn the language at a junior college before going to the University of Texas, from which he graduated in 2008. If he can keep hitting it long and straight and making clutch putts, his future looks interesting, too.