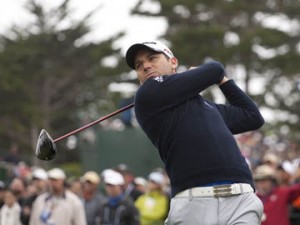 Sergio Garcia is showing signs of the old Sergio in his 2011 U.S. debut. Copyright USGA/Hunter Martin

Sergio Garcia is back on the PGA Tour for the first time in seven months at the Transitions Championship. Judging by his play in the first two rounds, he might be on his way to being back as a top player, too.

OK, it’s just two rounds, and they were Thursday-Friday rounds devoid of weekend pressure. Still, shooting 69-67 at Innisbrook without a bogey through 36 holes is impressive, and it leaves him one shot off the lead shared by Garrett Willis and Chris Couch.

Even Garcia was careful not to get carried away, saying that he would “just keep trying to do the right things, and see what we finish. I’m not worried about winning. I just want to keep building confidence into my head, and these rounds obviously help. If we go out there and shoot another round, beautiful. If not, that’s fine.”

Garcia’s confidence, and desire to play, were at a low ebb in August of 2010 when he announced that he was going to take a couple of months off, taking himself out of consideration for the European Ryder Cup team. He seemed to regain some enthusiasm when he served as an assistant captain for the winning effort at Celtic Manor, but hasn’t yet played his way back into the mainstream.

In six European Tour appearances since his return, three last fall and three in 2011, he has finished in the top 30 five times a row after missing the cut in the first one but hasn’t been better than ninth place. A bit better than the Sergio we saw for most of 2010, but not the dynamic Sergio of old. He’s fallen to 85th in the world ranking, causing him to miss the first two World Golf Championship events and thus make his PGA Tour season debut only this week.

It’s been a ball-striking clinic, as Garcia has hit 29 greens in regulation through two rounds. But what we all want to know is how he’s doing on the greens. He’s actually doing just fine.

Using a version of the claw grip that he first tried last November, he hasn’t missed a single putt inside 10 feet through two rounds. He really hasn’t faced many putts from that area, but it’s still encouraging that he’s made all five of his putts in the 3-to-5-foot range and all three from 5-to-10 feet.

Most of his birdie putts have been from the 10-to-19-foot range as he’s hitting his irons very well without quite knocking the pins down. He’s had only four birdie putts of less than 10 feet, one of them his second putt on a par five, while he’s had 14 in the 10-to-19 range. Completing the breakdown, he’s had six from 20-to-29 feet, five from 30-to-39 feet, and not a single one outside that.

Garcia has converted just three of those 14 from 10-to-19 feet, which is nothing special. Overall, his putting has been precisely Tour average taking into consideration the length of his putts, neither gaining nor losing any strokes on the greens. He has picked up strokes with his short game, with a chip-in during the second round and most of his scrambling pars coming on chips to tap-in range.

Average putting is an upgrade for Garcia, though his work on the greens in the last couple of years hasn’t actually been as bad as has been perceived. The Tour’s total putting stat, the most reliable gauge since it weighs equally putting from various distances, ranked him 79th in 2009 and 130th in 2010.

With Garcia still in the mode of building confidence rather than possessing it in large quantities, it will be interesting to see how he handles his position near the top of the leaderboard going into the weekend. In any case, it’s good for the game to have Sergio playing like Sergio again. Good for the Transitions Championship, too, where the other players in the top four through 36 holes are Willis, Couch, and Webb Simpson.