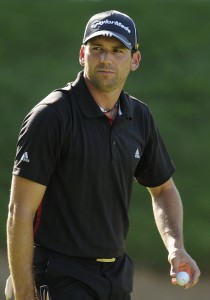 Garcia would love for Players to be fifth major.

Is the Players Championship the fifth major?

Sergio Garcia and Adam Scott would say yes. Then both Players champions would be major winners. Imagine how much easier that would make life for them?

Alas, that’s not the case.

The Players is great, great tournament. Frankly, I’d rather cover a Players than a U.S. Open.

The TPC course is terrific. There are a ton of stunning holes, concluding with three of the best finishing holes in golf. The par 5 16th provides a window of opportunity, while the famous par 3 17th and the brutal par 4 18th are all about survival.

The Players has produced its share of memorable moments and dramatic climaxes. Who can forget Hal Sutton’s immortal plea, “Be the right club today!”

Yet having said all that, it isn’t the fifth major.

The tournament simply doesn’t have the history of the other majors, two (U.S. and British Opens) date back to the 19th century.

Also, the players don’t treat the Players as the fifth major. World No. 1 Lee Westwood decided to take a pass this week, as did Rory McIlroy. Do you think either player would dare miss a U.S. Open?

Then listen to Tiger Woods’ comments from yesterday on why he decided to play this week.

“The whole idea is that I peak four times a year,” he said. “I’m trying to get ready for Congressional (U.S. Open next month), and I need some playing time.”

Woods is using the Players as a warm-up. He’s not alone.

Bottom line: The Players might be the fifth most important tournament on the golf calendar. But it isn’t the fifth major.