If you remember, in the final round of the U.S. Open last June, Dustin Johnson lined up a par putt on the fifth green and before he addressed the ball it rolled backwards, i.e. away from the hole, a tiny distance. Johnson immediately told a referee walking with him and fellow competitor Lee Westwood and the official simply asked if he had soled his putter behind the ball.

Johnson answered, “No,” which was quickly confirmed by Westwood. The official was satisfied and told Johnson to play on with no penalty.

Everyone thought that ended the incident until later as the duo walked on to the twelfth tee. Senior rules directors informed DJ there was a problem, namely there might be a penalty stroke added to his score for the incident seven holes previously.

According to the version of Rule 18-2 in effect at the time, on the putting green if a player caused a ball to move whether he meant to or not, he must put the ball back and add a stroke to his score. To complicate it further the rule contained the wording “more likely than not” as the standard the committee should apply in making their judgement.

The situation went from bad to worse since neither the average fan nor Johnson’s fellow competitors felt it neither sensible nor fair to overturn an on-the-spot referee’s judgement hours later. However, the Rules of Golf do specifically give the Committee the right to change a referee’s decision after a round based on their evaluation of the circumstances which often comes from studying videotape of the telecast.

A wait of seven holes to tell DJ he was in the crosshairs was beyond reasonable. The possibility of a penalty stroke left Johnson and the entire field in limbo as to where he and they stood in the most important championship of the year. To put it simply, the USGA wasn’t showing its best.

The incident proved again the myriad complications of the Rules of Golf cannot be passed off simply as the way to maintain the integrity of the game when it is a sport played out of doors with constantly changing conditions. Common sense should be factored in and thankfully Johnson, the phlegmatic South Carolinian, was able to overcome the uncertainty to win by four strokes though the record book shows the final margin was three. 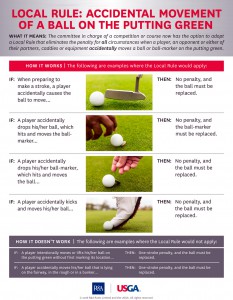 Effective January 1 the USGA changed the language of Rule 18-2 so if the ball on the green is moved accidentally, whatever the cause, the player puts it back without a penalty…what I’m calling the “DJ Rule.” It fixes the previous inequity properly and is more realistic, more sensible and fairer.

Which brings us to the reasons why the DJ Rule is so significant.

First, the USGA was responsive to the howls of protest by everyone from golf fans to PGA Tour players. The Rule 18-02 change is eminently more realistic and perhaps best of all accomplished without waiting for the usual molasses-in-January quadrennial rules review. Quite properly the words “more likely than not,” used as justification in accessing the penalty on Johnson were dropped. No longer will Johnson or any player be convicted by inference and extrapolation rather than facts.

Secondly congratulations to the USGA who, without compromising the spirit of the game, are “significantly” reworking the Rules of Golf to make them more user-friendly with a preview of the changes next month.

Hopefully the redo will be along the lines of, “You start here and hit it until it goes in over there.”

Images courtesy of the USGA