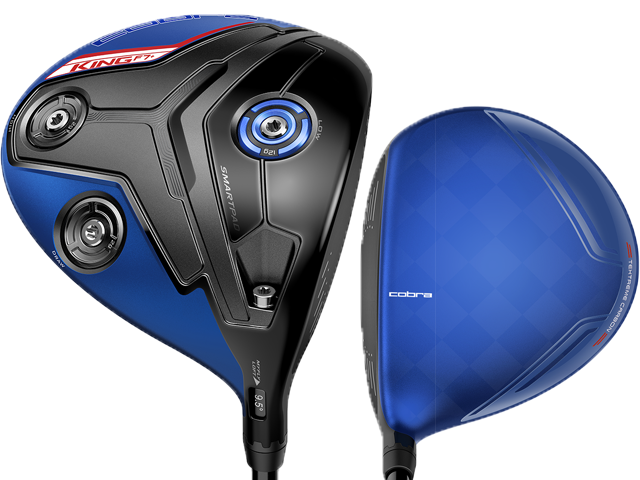 In 2013 Tom Olsavsky joined Cobra Puma Golf as Vice President of Research and Development after a long stint with TaylorMade Golf as Senior Director of Product Creation. Industry observers expected this well respected designer would make his mark on the entire Cobra product line and he has.

Last year we told you we liked the KING F6 Baffler with the iconic rails on the sole and the KING LTD driver with the center of gravity on the neutral axis of the clubhead plus a “Spaceport” in the sole to help create lots of forgiveness. In fact, Olsavskly’s team did such a good job, the KING LTD quickly took the number one slot in my bag.

We also commented on the KING F6 driver which had a font-to-back weighting system and in revamping the F6 for this season the result is the KING F7 (460cc $350) and the slightly smaller profile KING F7+ (452cc $400). Both have three weights (1-12 gram and 2-2 gram) in the sole. One is positioned in the front just behind the face, the second towards the heel and the last in the very rear of the head. By switching the weights around gives in essence three much different drivers.

Trying out the various weight positons in the KING F7+ did produce noticeable changes in trajectory and curvature bias. Our 10 rounds of testing included one with the 12-gram weight in the heel and two with it in the rear position. Since my tendency is a hook (truth be told it deteriorates often to a pull hook) having the heavier weight in the heel didn’t produce a lot of fairways and with it in the rear position trajectory was too high.

Settling on the heavier weight in the front position, which obviously was correct for my swing, produced and mid-trajectory basically straight shot and allowed for a fade for those holes requiring a dogleg tee shot.

The stock Fujikura PRO XLR8 shaft is slightly stiffer in the tip and butt and gives lots of mid-point kick for mid-launch complimenting the 12-gram weight being in the front position.

The crown is carbon fiber which, being 20% lighter than titanium, weight could be shifted lower and deeper in the head making the KING F7+ above average in forgiveness.

Then there’s what they are calling COBRA CONNECT, a partnership with Arccos to track every drive. The Arccos sensor is preinstalled in the butt end of the grip so once it’s paired with the free smartphone app not only drive data is recorded but there’s a GPS rangefinder. It works, is automatic to use and the data may be reviewed after the round including distance and the number of fairways hit. They tell me the sensor battery is good for at least two years.

Distance however, is the thing everyone wants to know about and the KING F7+ is as long as the KING LTD I was carrying and with the same dead-solid sound. The trajectory (with the 12-gram weight in the front positon) is mid-launch and the lack of ballooning in the wind indicates low ball spin even on slight mishits.

Finally, the blue KING F7+ has a really great look at address. The shape is pleasing and the blue—with red and white accents on the sole–stands out in a world of mostly black clubheads.

The Cobra KING F7+ also has what is sometimes called Tour validation. Fan favorite Rickie Fowler won the Honda Classic with the F7+ and it’s played by Lexi Thompson, Jonas Blixt, Jesper Parnevik and World Golf Hall of Fame member Greg Norman. While it’s tough to make a comparison between their swings and that of the average golfer plus of course they are paid by Cobra, it is a vote of confidence since they could be using any of the other Cobra models.

Negatives: the F7+ is billed as being for better players and comes with an adjustable hosel from 8 to 11 degrees so if you need help with trajectory the F7, which adjusts from 9 to 12 degrees (and with the 12-gram weight in the rear), would be a better choice.

Recommendation: Get on a launch monitor and test (with the help of a PGA Professional) the KING F7+ against any of the other new drivers and I think you will find it will hold its own in terms of feel, accuracy, forgiveness and distance. The $400 price is at the low end of the range for Tour level drivers and with comparable features making it attractive for a lot of budgets.