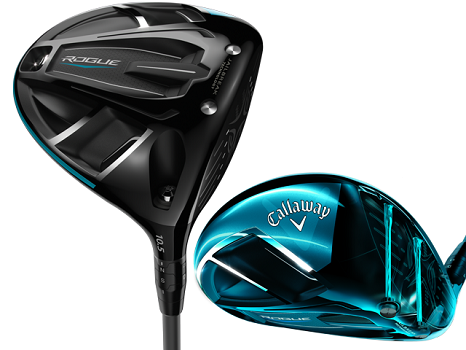 Callaway Golf had a banner season last year with the Epic club family, especially the driver, and hopes to do the same this year with the new Rogue driver and fairway woods. Like the Epic, Rogue has titanium bars (named Jailbreak technology) connecting the crown and the sole that are now hourglass shaped saving about 25% of the weight compared with those used in Epic. According to Callaway’s research the bars or rods have the effect of stiffening the club body, so energy is more efficiently transferred producing added ball speed. The second feature not to be overlooked is Rogue’s new X Face VFT variable face thickness profile which combined with the Jailbreak rods helps to preserve ball speed if impact is off center. This design also allowed mass to be moved altering the center of gravity for a better launch and added to the head’s resistance to twisting.

Compared to the Great Big Bertha, Epic and XR model drivers the face of the Rogue can be made thinner because of the improved Jailbreak rods and after doing an impact probability distribution a pattern for the thinner and thicker portions of the face was developed.

Boeing Aerospace was consulted on the crown’s Speed Step first seen on the XR driver and for the Rogue they were brought back to modify the geometry of the leading edge and head curvature for 0.6 to 0.7 mph increase in speed. The carbon composite crown is similar to the Epic driver but larger, in fact the largest Callaway has ever been able to produce. Measuring total MOI, i.e., both vertically and horizontally, the XR 16 driver had an MOI of 7,400, the Epic of last year tested at 8,000 and the Rogue a significant advancement to 8,600. Any driver over 7,000 is considered a “forgiving.” Company testing also shows the Rogue gave a 16% tighter shot dispersion.

While most of the attention, as it was last year with the Epic driver, will probably be focused on the titanium rods inside the head the Rogue’s face design is worth a bit more explanation. This X-Face with VFT has raised ridges in the shape of a large X in the middle of the inner side of the face with the thickness varying in strategic areas. The result is in addition to producing a minimum thickness overall it helps ball launch parameters and allows the areas of the crown and sole flange near the face to be thinner while still lowering energy loss from vibration.

There are three Rogue models. In addition to the standard configuration there is a draw model which has weight moved towards the heel…an anti-slice configuration to reduce side spin without a closed face angle, a more upright lie or lots of offset between the head and the shaft. Compared with the standard Rogue it has about 17 yards less slice and compared with the Epic driver with weights moved close to the heel, about 7 yards less. The Rogue Sub Zero for better players is a low spin model but still has a high MOI and has two weights in the sole, a 14-gram and a 2-gram to adjust the trajectory and spin. The Epic Sub Zero had 12-gram and 2-gram weights. 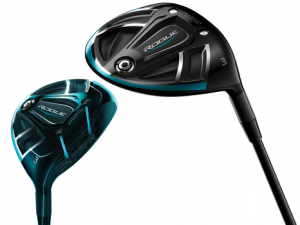 Each Rogue driver model is priced at $500 and will be available February 9. The Rogue fairway woods have the Jailbreak rods (made of steel not titanium as they are in the Rogue driver) with Callaway’s well-regarded face cup design. There are two models, the standard and the Sub-Zero. Both are priced at $300.