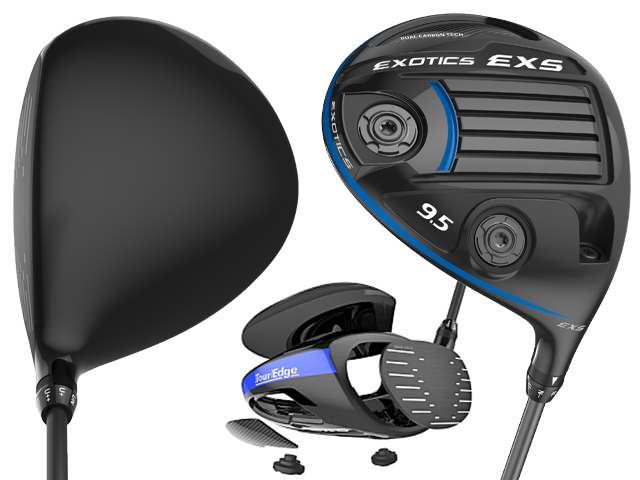 Tour Edge Golf is upping their ante in the driver market with the Exotics EXS model which is loaded with advance features and as significantly, at the very affordable price point of $300. Announced as the first of the new EXS family, the driver will be at retail on Nov. 1.

The Exotics brand originally was conceived to be played by the low handicappers among us and hit its stride year after year with top performing fairway woods and hybrids, but the drivers never attracted the same kind of attention.

That should all change with the EXS. It has all the indications of being a top performing driver capable of competing with drivers costing 50% more.

“The EXS driver is absolutely loaded with technology,” said Tour Edge President and Master Club Designer David Glod. “This is the most technology we’ve ever been able to fit into a design and each one works in concert with one another to provide the best performing driver possible. The shapes are beautiful, and we utilized only the finest in materials and components. I believe that at the aggressive price point that we are offering, the EXS driver will have its highest impact on the driver market over any other previous Exotics release.”

The EXS driver’s 460cc basic clubhead is anything but basic with a frame made from 8-1-1 titanium. The face is a variable thickness design of TSP 910 titanium as was used in the EX 10 model only in the EXS its both thinner and lighter. As has become almost an industry standard the crown is carbon fiber which saves more weight and part of the sole towards the toe is also made of carbon fiber. This helped to reduce the head weight and push the center of gravity deep for forgiveness and lower spin with the added benefit, less toe weight means a draw bias.

The “Flight Tuning System” is all about the weight saved in face, crown and sole being used in the two sole weights, one of 9-grams near the heel and one of 3-grams in the rear. The result is a low spin head producing a medium trajectory launch and an anti-slice tendency. Switch positions of the sole weights and the EXS produces a medium spin with higher launch and a neutral shot shape. There’s even a kit available for additional cost with three more weights (6, 11 and 14-grams) for further fine tuning.

Tour Edge says the majority of miss-hit happen towards the toe so the EXS has a RollFace with the bulge and roll in that part of the face reconfigured to help reduce ball curvature. The company also points out this the most forgiving driver they have ever made. The crown has a new shape and with the added taper to the clubhead’s profile improves downswing speed by reducing aerodynamic drag. Plus, to help preserve ball speed on impacts low on the face the speed slots in the sole have been made wider.

Finally, to further dial in the driver to the needs of the player the hosel has two degrees of adjustability, as much as any driver on the market. The hosel also adjusts to three lie angles giving the EXS 16 different settings between the two FTS weights and the eight different loft and lie settings.