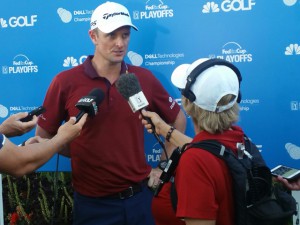 Justin Rose won the FedExCup bonus of $10 million on points though his three over par effort on Sunday at the Tour Championship put him in a fourth-place tie for the tournament behind Tiger Woods.

Don’t ask me to explain the points system since not even the players say they are clear about it, but for next year there’s a new plan so presumably we will no longer see Steve Sands and his white board. Fans will get a bit of bonus as well with the Golf Channel hopefully relegating “he controls his own destiny” to wherever inane clichés go.

In 2019 the player with the lowest gross score for the Tour Championship still may not win the FedExCup because the tournament will be a handicap event. The points leader at the end of the playoffs starts the Tour Championship with a score of -10 strokes, second in points with -8 and so on down to those at 26 through 30 who get no handicap adjustment to their score.

If in place this year points leader Bryson DeChambeau with a 19th place score of -1 would have finished at -11. Woods would have deducted two strokes for a -13, second place Billy Horschel four strokes putting him also at -13 and Dustin Johnson who finished in third four shots behind Woods would have used his six-stroke handicap for a three-way tie at -13.

In fact, Rose would both win the tournament and the FedExCup because his fourth-place -6 would be handicap-adjusted by eight shots giving him -14.

Coincidence? I don’t know but trying to keep this all straight made my brain hurt so I didn’t go back to see what would have happened in 2017 when Xander Schauffele won the Tour Championship and Justin Thomas the FedExCup.

When I first read the press release describing the new system my reaction was, “A handicap event…really?”

OK, stroke-play I’ll give you two a side, and if I beat you by less than four shots you win. Sounds like the conversation Saturday on the first tee doesn’t it? Well that’s what the FedEx Cup is changing to. We can only look at the bright side and assume this handicap system won’t be as big a pain in the cerebral cortex as the point system.

The PGA Tour wants to finish the year with only one winner not two like Woods and Rose or Schauffele and Thomas. The new plan also had to satisfy the sponsors FedEx and Southern Company by having the best chance to put the top players on display plus make the media happy and of course the fans. The players will show up regardless, but the new plan does bump the FedExCup payout from $25 million to $60 million with $15 million for the winner up from $10 million.

Players will still earn regular season points for determining who gets to the playoffs but at least the contest for the FedExCup and the Tour Championship should be easier to follow. It means however Steve Sands will have to find another job on Tour Championship Sunday.