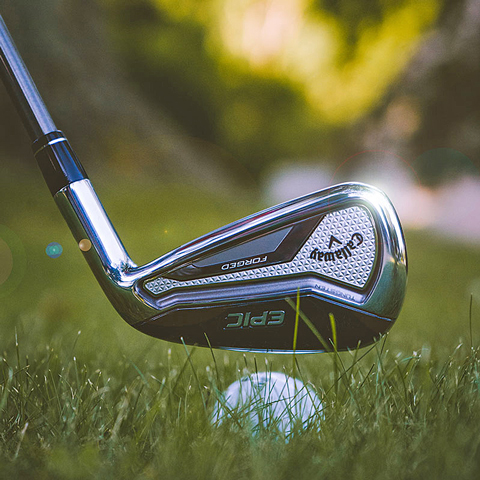 The original Callaway Golf Epic irons released in the spring of 2017 had something of a “concept car” approach with several features that were at the forefront of iron technology. The cast heads had a tungsten weight positioned low towards the sole, the hosel was hollow and they gained the reputation of hitting the ball a long way. Less favorable feedback however was especially the short irons weren’t consistent distance-wise as they needed be.

This year’s replacements tagged Epic Forged do not have cast heads and Callaway hopes they will not only correct the shortcomings of the old ones but provide a breakthrough in game-improvement ultra-premium price irons. They fit neatly into the slot between Callaway’s players-distance category Apex 19s and their super game-improvement Big Berthas becoming the latest game-improvement irons with forged heads to target golfers in the 6 to 20 handicap range. 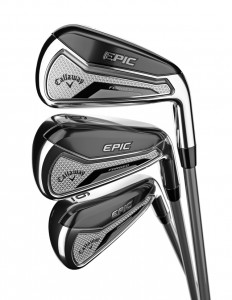 They have a number of interesting features starting with the looks which are very clean with a well-proportioned hollow clubhead in a bright finish (Callaway calls it Platinum Chrome) of the 1025 carbon steel head.

The interior weighting as expected is tungsten, but a relatively pure form of tungsten which can’t be welded to steel. Therefore, to place it low in head as well as not interfere with the flexing of the face another way to fix it in place needed to be found. The solution was to put a jacket of urethane around the tungsten and then inject a urethane-microsphere fluid into the hollow head. After the fluid hardens the tungsten is suspended in correct location.

The microspheres mixed in with the urethane are microscopic and made of glass bubbles which gives the urethane a porous quality that, when pushed by the flexing of the face, collapses in on itself without pushing back which would reduce ball speed. At the same time the urethane-microsphere material acts as a very effective dampener to absorb any vibration.

The face cup (Variable Face Thickness or VFT) is designed so when deflected by impact with the ball the shape is controlled so it puts the proper amount of spin on the ball. The face cup has a thinner top line than previous versions and combined with a sharper curve at the bottom gives a larger amount of unsupported area needed for the greatest face flex. Epic Forged wedges, where the goal is more control rather than just adding distance, have a MIM’d (metal injected molded) tungsten weight welded to the back of the face plate that raises the head’s center of gravity higher to help produce a precise impact. 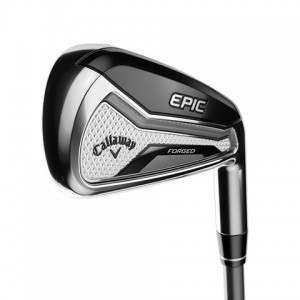 Looking at the specs of the Epic Forged irons the lofts very strong with the pitching wedge at 41° and the 4-iron at 18° which 20 years ago was the loft of a 2-iron. Regarding this point and directly addressing at least somewhat misinformed comments in the media about companies “jacking lofts” Dr. Alan Hocknell, Callaway Senior Vice President of R&D said, “…it’s not just about loft. It’s about the added launch angle that a face cup actually provides. It’s about the placement of the tungsten weight very low in the head and they give you added launch angle and it’s about the spin control VFT. The combination of all those characteristics allows us to have a loft that on paper looks stronger than more traditional lofts but still produces irons that are relatively easy to launch and have great apex height.”

The upmarket placement of the Epic Forged irons includes as stock the Golf Pride Tour Velvet Align Silver grip and a choice of stock shafts. In steel it’s the Aerotech Steelfiber Flight Control series designed for the slower swing speed player and in graphite the Mitsubishi Tensei AV Silver with a mid-launch, mid-spin profile.