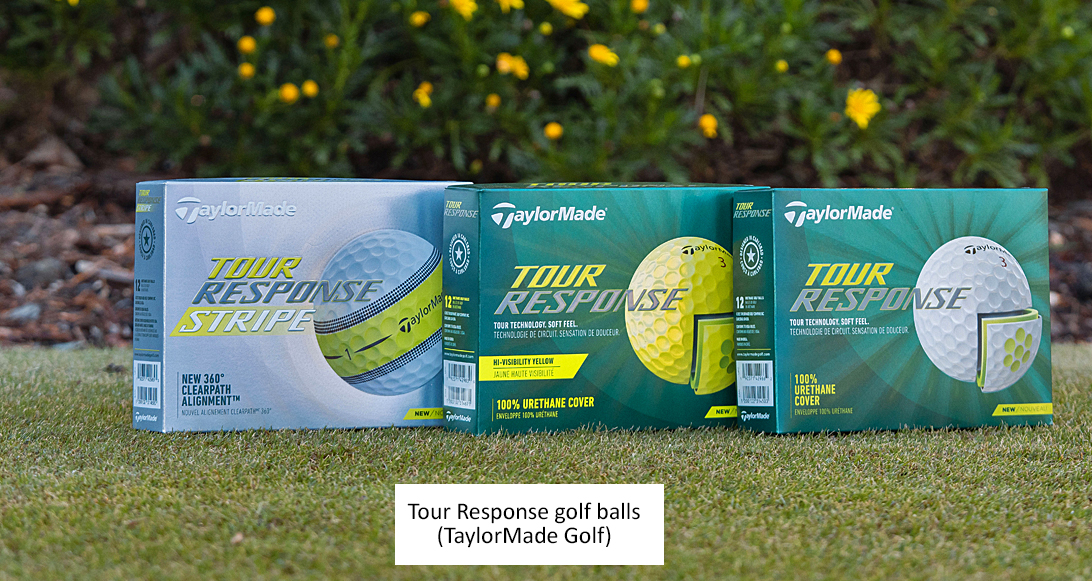 The TaylorMade Tour Response ball is a 3-piece urethane cover with a 70 compression and constructed to be played by those looking for, in TaylorMade’s words, a “Tour level ball for non-Tour players.”

WYNTK
Like most ball companies TaylorMade Golf has a range of product to meet the needs of a variety of golfers and the reengineered Tour Response is meant for those wanting a soft feel ball, i.e., less compression, with a cast urethane cover just like the premium balls played on Tour.

The use of cast urethane gives the Tour Response the feel and control on scoring shots similar to their top-of-the-line TP5/TP5x but since it is three layers rather than five the price is much less. The dimple pattern on the TP5/TP5x proved so successful with players using it on the PGA Tour TaylorMade has used it on the new Tour Response providing another reason to like this ball. The new dimples with a dual radius, the company says it is the most aerodynamic they have ever designed, helps the ball stay in the air longer so carry distance is improved.

Those looking for a soft-feel ball will appreciate the overall compression of 70 in combination with the Hi-Spring Core and firmer mantle layer.

Company testing shows the Tour Response driver spin is even lower than the TP5/TP5x which is a help for added distance, and the launch and spin combination may be a winner for many players.

Again, comparing with the Tour-level TP5/TP5x the launch of the Tour Response is higher, iron spin is lower, feel is softer while wedge spin and control is still high because of the soft cover.

Mike Fox, Director, Product Creation Golf Balls, has been quoted saying, “The new dimple pattern paired with a 100 percent cast urethane cover simply creates a softer version of a Tour level ball made for the everyday golfer that is looking to reap the benefits of our tour proven technology at an affordable price.”

The Stripe alignment aid of a wide yellow stripe flanked by four rows of black dots on either side is extremely visual and much larger than a simple line around the ball from a marking pen.