After the PGA Merchandise Show closes information is released about this “must-attend” for golf industry professionals. As for the past several years the Show used well over 1 million square feet of the Orange County Convention in Orlando and should one be of the mind to walk all of the aisles the trek would cover 10 miles. The 61st edition opened Wednesday Jan. 22 and ran through Friday Jan. 24 preceded by the world’s largest demo day taking place over the 360 degree practice facility at Orange County National Golf center on Tuesday the 21st. Officially the attendance was put at slightly over 41,000 golf industry members which was slightly lower than the 43,000 in 2013. The number of exhibitors however at 1,009 remained essentially unchanged. Attendees came from 81 countries and included more than 1,000 accredited members of the media. 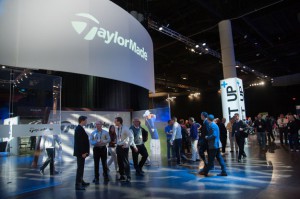 As for the past several years TaylorMade-adidas Golf had by far the largest exhibit taking up the entire end of the Orange County Convention Center so they could include all their brands: TaylorMade, adidas, Ashworth, Adams Golf, Yes Putters. 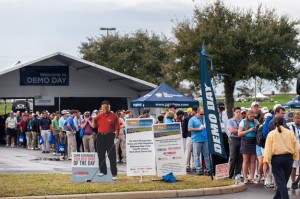 Demo Day at the Orange Country National Golf Center was well attended as shown by the registration line.

On a positive note the number of PGA Professionals in attendance for all or part of the week’s activities increased by 5 percent from 2013.

Most golf professionals consider the Show to be a “Major” and make the trip to Orlando not only to gather the latest product information but also to take advantage of the educational forums and learning sessions on golf instruction, business management and programs to attract and retain players. However not to be overlooked are the networking opportunities, providing the chance to see and be seen, to renew friendships and establish new ones.

According to Ed Several, PGA Worldwide Golf Exhibitions Senior Vice President and General Manager, “We are very pleased with the rise in PGA Professional attendance as they are important influencers to the business of our exhibiting companies. Beginning last year, we worked hand-in-hand with the PGA of America to engage more PGA Professional participation, often on a grassroots level attending PGA Section and Chapter events, and the results have further strengthened the PGA Merchandise Show as the world’s largest gathering of PGA Professionals. In addition to non-PGA buyer qualification being more stringent in 2014, we also experienced some travel challenges for attendees with the snow storm in the Northeast. Overall though, the PGA Merchandise Show delivered more PGA Professionals and buyers who could influence retail and move forward business and participation in the game.”

The Golf Channel increased their coverage of the Show’s activities and celebrities to nearly 15 hours of live broadcast starting each day with the “Morning Drive.” Former tour player turned entertainer, David Feherty, hosted two sold-out performances of his Golf Channel program “Feherty Live” on the stage at Universal Studios Orlando. 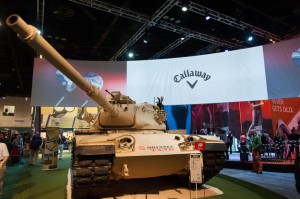 Callaway Golf’s Odyssey brand drew lots of attention with an Abrams tank as part of their display.

PGA of America president Ted Bishop commenting after close of activities said, “The PGA Merchandise Show has become a global gathering place for every component of the golf industry. For one week each January it is the epicenter of the golf universe. In terms of business, I think the industry is in a good place right now, the best place we’ve been in for several years. The 2014 PGA Show has given us a sense of optimism and enthusiasm as we move ahead.”

Though similar sentiments have been expressed in previous years the consensus by those who have attended many PGA Merchandise Shows seems to be that in fact the golf industry is on the upswing. This was expressed by the attitude of attendees and other factors such as an apparent slowing in the decline in the number of golfers, a major factor creating problems in the industry for at least the past 10 years.