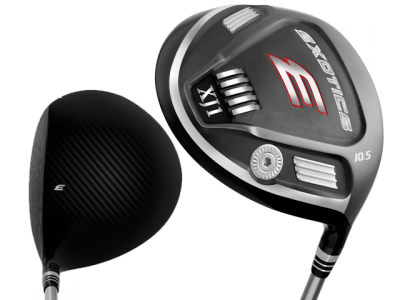 Tour Edge Golf rolled out the Exotics brand in 2008 with the express purpose of utilizing technologies and materials that might not make economic sense for large club manufacturers since the need for higher pricing would limit sales. This idea has pushed the 30 year old company to an enviable positon of producing clubs of outstanding performance often pioneering manufacturing processes such as combo-brazing, a chemical bonding of the face to the club body rather than welding.

The new Exotics XJ1 driver brings together materials and construction techniques that Tour Edge says are designed to help the average golfer. Quoting President David Glod, “Most technologies of the past decade have benefitted players with higher swing speeds eliminating the majority of golfers. We have been developing the XJ1 driver for over four years, working on each characteristic of the club, moving critical amounts to weight around for the best results and waiting for the technology to catch up to our goal of bringing this extremely lightweight driver to the market which will benefit golfers with real swing speeds.”

The basic idea then, is a very lightweight driver that gives the average player the opportunity to create more clubhead speed along with the launch characteristics to produce more yardage.

Tour Edge first breaks new ground in the XJ1 by making the club body from a titanium alloy they have tagged as SUPERMETAL. This 9-1-1 titanium is significantly lighter than titanium used previously but with very high strength, two properties allowing the metal to be thinner and effect a 10 percent weight savings.

Glod made the point, “…no one has the SUPERMETAL, which allows us to shift a huge amount of the weight to the sole. The SUPERMETAL is also more elastic at normal swing speeds, which translates into greater spring from the whole body while keeping the CT [Characteristic Time, a measure of flexibility] normal.”

And the new ideas don’t stop there. The XJ1 crown is made of a Kevlar-carbon combination that weighs only 12-grams, saving more weight and lowering the center of gravity. Also since this material is stiffer it aids in producing more ball speed. Significantly, according to Glod, the center of gravity is below a line running perpendicular to the clubface producing a higher launch with lower spin.

In response to the question, is the advantage of Kevlar-carbon because it is lighter than the carbon fiber, Glod responded, “No, the Kevlar-Carbon in the XJ1 allows better stiffness producing a better sound.”

The face plate of thin flexible titanium is robotically laser bonded to the body giving two nice benefits, additional weight saving and a higher trampoline effect or C.O.R for more forgiveness. The sole has three tungsten weights and because of the weight saved in the body and crown, heel and toe bars for more stability and better resistance to twisting have been added. A draw ball flight tendency is enhanced by a replaceable tungsten screw near the heel of the sole with additional weights available.

With a 45-gram Fujikura Air Speeder R-flex shaft the total weight of the XJ1 is only 275-grams placing it in the ultra-light category so average golfers can swing it faster which means more distance. Even going to a stiff flex the weigh only increases by 10-grams.