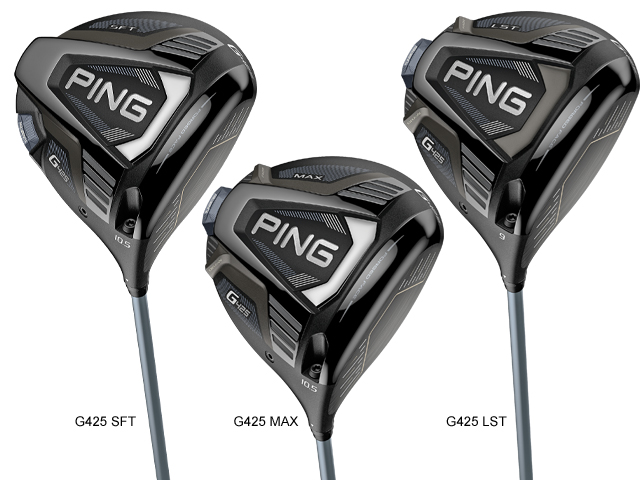 Ping’s new G425 series of three drivers builds on the notable success with both professionals and average golfers of the previous G410 model.

The G425 MAX is the primary model in the series and will suit most players. It features an extremely high MOI the company says is the highest they have ever achieved. MOI is a measurement of the head’s resistance to twisting when impact is towards the heel or toe making it critical for average swingers who have trouble hitting in the sweet spot every time.

Revisions to the Dragonfly crown configuration allowed engineers to make the sliding weight at the rear of the head even heftier, 26-grams total, which helps adjust ball flight and improve the driver’s forgiveness.

The G425 LST (Low Spin Technology) model has a slightly smaller clubhead and meant for use by better players, those with high swing speeds, and uses a 17-gram movable weight. The head is designed to produce lower ball spin, a key to more distance, and testing shows about 200 rpm less than the previous G410 LST and 500-700 less than stablemate G425 MAX.

G425 SFT (Straight Flight Technology) is designed to help those with a pronounced left to right slice and does not have a sliding weight but rather a 23-gram fixed weight near the heel giving the SFT 25 yards more draw bias than the G425 MAX when its movable weight is positioned towards the heel.

“The Tour response to the G425 driver has been exceptional,” said John Solheim Ping’s president. “It started with a win its first week on the European Tour in the hands of Tyrrell Hatton at the BMW PGA Championship and has continued with wins around the world ever since. Viktor Hovland claimed the Mayakoba Golf Classic in early December with the G425 LST and one week later the U.S. Women’s Open champion also relied on the new driver. In all, the G425 driver already has six wins to its name, helping earn titles on all the major tours around the world. The players are instantly attracted to the clean, premium look of the clubs and even more impressed with the performance.”