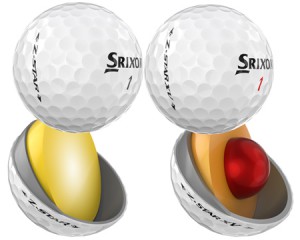 Srixon’s Z-Star 2021 family is the seventh generation for this line of golf balls and includes the 3-piece Z-Star and 4-piece Z-Star XV with both having enhanced spin plus more ball speed from a gradational density core.

WYNTK:
The familiar Z-Star series from Srixon is now in its seventh iteration and retains the distinction between the Z-Star and Z-Star XV.

The Z-Star is softer, lower compression, and is higher spinning around the greens for those critical scoring shots than the Z-Star XV but expect the mid to high trajectory XV to be longer than its stablemate. Srixon says each have low spin off the driver and both use Srixon’s FastLayer Core which, if you are not familiar with it, is softest in the center becoming firmer towards the edge.

“The new Z-STAR and Z-STAR XV golf balls are specifically designed for better players and they feature advanced technology to add performance from tee to green,” said Jeff Bunski, Vice President of Research and Development. “The Z-STAR XV is played by some of the longest hitters on professional Tours around the world, and this new generation features a reformulated inner core to add even more distance. The new Z-STAR produces the highest green-side spin of any ball in our line-up, thanks to its super soft urethane cover and Spin Skin coating.”