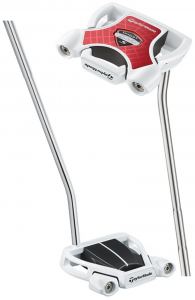 Why is important you ask? Because the higher the MOI the more stable a putter is when the ball is struck off center and we all (at least on occasion) don’t strike every putt perfectly. More stability means more consistency and control and more putts in the bottom of the cup.

“Ghost Spider S isn’t an evolution in mallet performance, it’s a revolution,” said Michael Fox, Product Line Manager for Putters and Wedges. “To create it, we started with the DNA of our most successful putter franchise and applied more than a year of obsessive feedback from our toughest customers, our Tour Staff professionals. In terms of the two most critical aspects of putting — alignment and stability — Ghost Spider S is the complete package.”

PGA Tour players were quick to put the new flat stick in their bags. The second week after TaylorMade’s tour staff players were introduced to the Ghost Spider S it was the No. 1 overall model with six in play including Jason Day, Y.E. Yang, Pat Perez, Rory Sabbatini, Spencer Levin and Peter Hanson.

“Mallet putter use on the PGA Tour has grown during the past decade to where, today, more than 30% of PGA Tour pros use a mallet,” added Fox. “We’re confident that Tour pros and amateurs who favor a mallet will want to explore Ghost Spider S because the performance benefits are impossible to ignore.”

The Ghost Spider S standard model will be in shops November 1 with a SRP of $179 in standard length and $199 in a belly model while a Ghost Spider S “short slant” hosel will hit the market a month later.