The Odyssey Flip Face Putter from Callaway allows players to change the face insert by loosening it (with a provided screwdriver which handily doubles as a divot tool!), rotating it 180° and retightening. Callaway bills it as an extension of their commitment to club adjustability. The flip moves between the new Metal-X insert to the old standby White Ice surface letting players match their putter to green conditions on any give day. 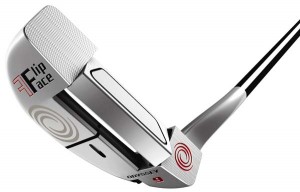 Among the early adopters to Flip Face was PGA Tour Professional Stuart Appleby, who put the #5 model in play early in the 2012 season. “I really like the look of the Flip Face, and it reminds me of the license plates on James Bond’s car that used to flip around,” Appleby said. “I like the Metal-X insert so much; I love that firm feel. But it’s nice having the option to switch to the White Ice insert if you want to.”