Talk about “hot” golf instructors and the short list has to include Dave Stockton, winner of two PGA Championships plus eight other PGA Tour wins and three Champions Tour majors. He has the reputation of knowing a lot about putting and better yet, he possesses the skills to communicate that knowledge to those of us less gifted.

To that add the all-star list of professionals, who have been students of Stockton and his two sons, Dave Jr. and Ron, (Phil Mickelson, Rory McIlroy, Annika Sorenstam Morgan Pressel, etc.) and…well, you get the idea. When it comes to putting he knows what he’s talking about. 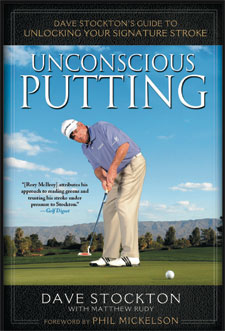 Stockton latest book Unconscious Putting, written with Matthew Rudy, explains putting in a way I have not heard before beginning with the fact not every golfer is the same and each one has a putting stroke unique to him. Stockton calls this a player’s “signature stroke.” As he told me in a recent interview, “With so much putting instruction concentrated on technique a player can’t make use of his signature stroke but gets bound up by all the thinking. It’s paralysis by analysis.”

Stockton explains his belief the putting stroke should rely on touch and feel and become “an unconscious act, just like signing your name.” He illustrates the fundamentals of putting not losing sight of golf’s BIG idea – get the ball in the hole.

The most useful part of this slim volume (93 pages) – Stockton said, “Putting is just not that complicated so why take up more pages.” – is the instruction of how average golfers can create their own routine and signature stroke accompanied by a positive mental approach. Very useful and informative to say the least but more importantly it can mean making more putts and in turn lower scores which brings more enjoyment to the playing of the game we love.

Unconscious Putting is available for $29.95 on DaveStockton.com.

One Response to “Unconscious Putting”