Let’s see…square grip…flex the knees…left arm straight…head steady…swing slowly…shift weight left…balanced finish. Whew! There’s a lot to think about–too much in fact for the short time a swing takes. Well anyway, that’s what time on the range is for, to build the proper moves into muscle memory by repetition. Right?

But which moves? Like Hogan? Or maybe we should copy Palmer. Or Nicklaus or Furyk or should it be someone else?

Knowing the proper moves, their sequence and more importantly understanding how they apply to your individual swing is a daunting task, even with the help of a good instructor.

It was this line of thinking that lead former PGA Tour player Bob Koch, inventor of the Medicus swing training clubs, to the conclusion a better approach was needed. As he points out with marvelous simplicity, “the basics are fairly basic.”

After lots of thinking, analysis and trial and error, Koch working with PGA Instructors Chuck Evans and Dave Wedzik found their answer. It boiled down to five key moves or positions they were able to identify after studying the swings of champion golfers of the past 100 years. The list of those they studied is impressive and included Jones, Hagen, Hogan, Nelson, Palmer, Nicklaus and Woods.

“One reason teaching is so complicated is that a student can’t focus on 10 different parts of the swing at once,” explained Koch. “But while golf’s most prolific champions had different grips, stances and swing planes, all had mastered five essential things that are obvious on film and in photos. It’s the common traits that enabled the greats to strike balls with consistent purity.”

Named “The PureStrike Swing Keys” it first and foremost is a framework within which golfers can learn about both “the swing” and their particular swing. Most importantly though, is the application of the keys to achieve consistency, accuracy and distance…in other words how to take it to the course to score lower and gain more satisfaction and have more fun.

The first Key to striking the ball properly especially with irons is keeping the head steady and centered between the feet from address until follow-through. The more the head remains fixed with no side-to-side or up and down movement the better job it does providing the top of the axis around which the swing is made. With head in the proper spot to start and remaining there, not only is a consistent swing possible but great balance is achieved as well. 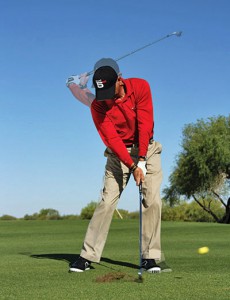 second key. This means for a right handed player having 80% of his weight on the left foot when striking an iron shot. Evans explained the importance, “One hundred percent of the best ball strikers have their weight forward at impact, while 100 percent of the worst have the weight on their back foot. There is a direct correlation between forward weight and handicap. Get the sequence down that puts the weight forward correctly and you’ve set the foundation for consistent ball striking.”

Next is one you’ve heard before; you must have a flat left wrist as the clubhead strikes the ball or saying it another way, the left wrist must be in-line with the left forearm from before impact to follow through. It is the most important key to consistency and the number one factor for producing shots that are on line. Without it the swing can only produce the correct impact by chance. All great players’ have done it. Think of it as the way the entire club, not just the clubhead, is delivered to the ball.

aving a diagonal sweet spot path is key number 4. With a correct swing path the sweet spot does not move straight back and straight through but back and up on a diagonal path, then down and through finishing back and up diagonally. Imagine there’s a giant hula hoop resting on your shoulders and intersecting the ball. It forms an imaginary inclined plane on which the sweet spot of the clubface should travel. It is the only way to ensure consistent solid contact in the center of the clubface to achieve directional control.

Lastly is proper control of the clubface since that determines both the start line of the shot as well as how the ball curves in flight. Another way to say that is to control a shot’s accuracy the clubface has to be controlled.

After a long conversation with Wedzik and the exchange of several emails he concisely boiled it down to, “Honestly this is probably the most important thing golfers can learn.”

The Pure Strike approach is simple, uncomplicated, straightforward swing keys ideal for anyone wanting to improve their game. Find out more at PureStrike.com.