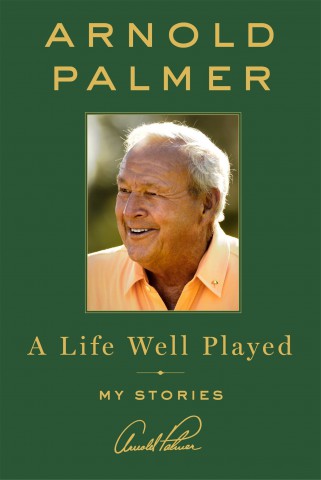 He doesn’t play any longer and perhaps his step has slowed some but Arnold Palmer is still The King and what his millions of fans may not realize is he has authored or coauthored more than a dozen books.

And there is to be one more to be titled, “A Life Well Played: My Stories,” a follow up to his 1999 biography. The announcement came from the publisher St. Martins Press a division of MacMillan Publishers.

In a press release the 86-year old Palmer was quoted, “Though I have written a number of books in the past, this one was particularly important to me, because, as I delved into the process, I realized just how much I still wanted to say to my friends in golf and to fans of the game in general. Going through the exercise of getting it all down has been personally satisfying, but I couldn’t have done it without a dedicated group of individuals who truly believed in this project.”

The new book talks about his life bringing new details to some familiar stories and giving readers added insight with previously unpublished ones. His success golf and business has always been notable for his going about it the right way and always giving back to the fans who made it all possible.

Generous and a true gentleman, Palmer is the gold standard of how to conduct yourself and in “A Life Well Played: My Stories” there a dose of advice and guidance plus sharing of his career in golf, business and many charitable causes.