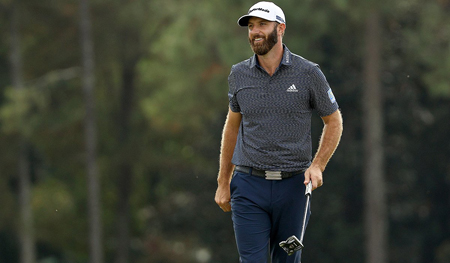 A friend, who happens to be a golf professional based in California, put it best Saturday afternoon with the comment, “DJ’s putting on a clinic,” and that in a nutshell was the 2020 Masters with Dustin Johnson winning by five strokes.

COVID-19 changed our lives and in addition to causing a disruption of the 2020 PGA Tour schedule made the fan-less Masters totally different. Let’s hope the next playing, the first week in April the fans, their cheers and groans and buzz are back. This is not to say this one was a Masters in name only, but a repeat of this year we can do without.

Course conditions were soft. Mud balls in the fairway were common, greens were slower and lost-ball length rough (just ask Jon Rahm) made it difficult to judge how much spin the ball would have. Wind was a factor especially on Sunday as Tiger Woods proved on number 12 paying the price for guessing wrong multiple times…he made a 10 on the par 3.

Speaking of Tiger, he was never a factor and said his right knee was a problem all week. Unfortunately, we are watching an incredible athlete whose body allowed him to only play three times in two months recording a tie for 72 (ZOZO Championship) and a tie for 38 (Masters) preceded by a missed cut (U.S. Open). Draw your own conclusions. Fans are rooting to see the return of the Tiger of old not an old Tiger.

Phil Mickelson was also never a factor in the major championship that at age 50 he has the best chance to win but scores of 69-70-79-73 left him with a disappointing tie for 55th. Does the PGA Tour Champions look any better Phil? No need to remind you the only two events you have played on the senior circuit were wins.

Masters’ TV ratings were not great but given the multitude of choices, streaming, etc. that is hardly a surprise, plus college football on Saturday and the NFL on Sunday all took a share of potential views. Next April the Masters goes back to the week following the NCAA basketball final four.

The media including the commentators on ESPN and CBS Sports did their usual job covering the action, sometimes missing important points but that is the nature of live television and we have gotten used to the inanities.

DJ did not just “hold on to win,” as some implied. He tied for the lowest rounds both Saturday and Sunday with a virtually perfect game plan even to the point of laying up on the par 5s on Sunday’s back nine rather than going for the green in two. He made birdie on both.

Johnson works as hard as anyone to improve and this victory cemented his early selection to membership in the World Golf Hall of Fame. His has 24 wins in 12 years and in addition to the Masters he was victor in the U.S. Open four years ago.

Finally, listening to the wise-thinkers, golf pundits and general know-it-alls prior to the Masters would lead the uninformed to think all Bryson DeChambeau had to do for a green jacket was show up. “He hits it too far, Augusta can’t stand up to drives of his length and most holes including the par-5s will be a joke,” was the theme however even some of the big name opinion providers forgot the object of the game is to get the ball in the hole with the fewest strokes. True, all week Bryson was suffering from dizziness and not at his best, but the most germane question is do any of the “He hits it too far” brigade really believe anyone could have beat DJ’s record breaking 20-under par? Not likely.